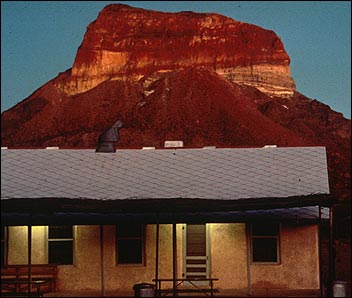 Compare the Spanish and Anglo influences on settlements along the Texas-Mexico border region of the Rio Grande.

1. To understand living conditions for settlers around Castolon at the turn of the 20th century, including how they supported themselves;
2. To explain why early settlers in the area of the Rio Grande felt free to cross the international boundary frequently;
3. To list, in English and Spanish, 10 commodities local ranch families could have obtained at the Castolon trading post;
4. To compare the early history of Castolon to that of their own communities in the early-to-mid 1900s.

Time Period: Late 19th century to early 20th century
Topics: The lesson could be used in teaching units on westward expansion or United States geography. Students will practice skills of map reading, and analysis of photographs and primary documents.

Set below the towering cliffs of the Sierra Ponce, Castolon is a small trading and farming community in far southwest Texas. While the muddy Rio Grande brings a constant supply of water to the area, the lack of steady rain makes the landscape harsh. White and yellow soils lie open to the southern sun, woody vegetation is sparse and stunted, and turkey vultures soar overhead. Yet Castolon offers more than severity: its history includes a harmonious mixing of the people along the United States-Mexico border.

The first inhabitants of this section of the Rio Grande flood plain were American Indians, who farmed and hunted. By 1900, the area began to attract American and Mexican farmers and ranchers interested in establishing homesteads and raising families. As the rest of the United States entered the industrial age, the section of West Texas along the Rio Grande remained a frontier society. The 1910 Mexican Revolution brought unrest and danger to people on both sides of the river, as bandits and raiders invaded the area. The US Army responded by commissioning permanent and temporary camps along the Rio Grande. One such post was Camp Santa Helena, located in the southwest corner of today’s Big Bend National Park. Just after the Mexican Revolution ended, two men created a farming, ranching, and storekeeping partnership at Camp Santa Helena, now known as Castolon. They named their business La Harmonia Enterprises, a name they hoped would accurately reflect a continuing condition of the area–harmony between peoples.

Keep two general concepts in mind as you begin your study of Castolon, a small trading and farming community in far southwest Texas. First, although international boundaries sometimes correspond to natural features we can see–the US-Mexican boundary does follow part of the course of the Rio Grande–borders themselves are not a visible part of the landscape. They exist because humans have created that idea, and they can change over time.

Second, trends and new technology do not always appear in all places at the same time. For example, while many Americans were driving automobiles and having milk delivered each morning to their houses, people in West Texas still traveled largely by horse or horse-drawn wagon and depended on their gardens, fields, and livestock for most of their food.

West Texas is arid, sparsely vegetated, and shows a great deal of topographic variation. The buildings in the Castolon Historic District sit on a mesa about 1,900 feet above sea level and just above the flood plain of the Rio Grande. About two miles away from the La Harmonia Store, a line of huge limestone cliffs–the Sierra Ponce–fill the southern horizon. To the north lies a single, flat-topped peak called Cerro Castellan and, beyond that, the Chisos Mountains. Average rainfall in the Castolon area is about eight inches each year. The soil is colorful, and woody shrubs and grasses grow in occasional clumps. The Rio Grande, about one-half mile away, is a muddy river which many people could wade across most of the year. During flood periods, however, the river roars past and has even flooded the lower areas where people farmed and lived.

Smithsonian: US Latino History and Culture
Visit this special Latino feature for information on "border culture." Included on the site is an overview of issues related to living on the border, both in the past and the present. Of special interest are the links titled "United States-Mexico Borderlands/La Frontera" and "Borders and Identity."

Library of Congress: The South Texas Border, 1900-1920
The American Memory Collection feature, The South Texas Border, 1900-1920 captures the Lower Rio Grande Valley during the early 1900s. It includes negatives, slides, prints, postcards, and maps that document the history and development of South Texas and the Mexican border, including the Mexican Revolution, the US military presence along the border, and the development of the Rio Grande Valley. The Briscoe Center for American History holds a similar online collection.