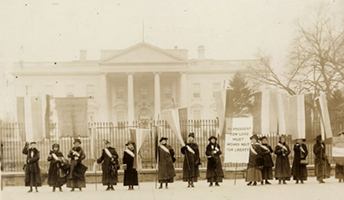 Grade Level:
Middle School: Sixth Grade through Eighth Grade
Subject:
Literacy and Language Arts,Social Studies
Lesson Duration:
90 Minutes
Common Core Standards:
6-8.RH.2, 6-8.RH.3, 6-8.RH.4, 6-8.RH.5, 6-8.RH.6, 6-8.RH.7, 6-8.RH.8, 6-8.RH.9, 6-8.RH.10, 9-10.RH.1, 9-10.RH.2, 9-10.RH.3, 9-10.RH.4, 9-10.RH.5, 9-10.RH.6, 9-10.RH.7, 9-10.RH.8, 9-10.RH.9, 9-10.RH.10
Additional Standards:
US History Era 3 Standard 3B: The student understands the guarantees of the Bill of Rights and its continuing significance.
Curriculum Standards for Social Studies from the National Council for the Social Studies
Thinking Skills:
Remembering: Recalling or recognizing information ideas, and principles. Understanding: Understand the main idea of material heard, viewed, or read. Interpret or summarize the ideas in own words. Applying: Apply an abstract idea in a concrete situation to solve a problem or relate it to a prior experience. Analyzing: Break down a concept or idea into parts and show the relationships among the parts. Creating: Bring together parts (elements, compounds) of knowledge to form a whole and build relationships for NEW situations. Evaluating: Make informed judgements about the value of ideas or materials. Use standards and criteria to support opinions and views.

What locations have Americans used throughout history to organize protests?

1. To examine the relationship between Lafayette Park and the White House;
2. To explain the importance of the rights guaranteed by the First Amendment, using the NWP women’s suffrage campaign of 1917-1920 as a case study;
3. To describe the campaign and to explain why NWP leaders decided to make Lafayette Square the party’s headquarters;
4. To identify places in the local community where controversies about First Amendment rights have occurred.

Every day the women with their banners marched across the park to take up positions in front of the White House. They came from the headquarters of the National Woman’s Party (NWP) on Lafayette Square in Washington, D.C. Their banners demanded that President Woodrow Wilson help them in their campaign to get all American women the same right to vote that American men already had. They maintained their vigil every day for two months, through the rain and snow of January and February 1917.

The First Amendment to the U.S. Constitution guarantees all Americans freedom of speech and of assembly and the right to petition their government. What better place to exercise those rights than in front of the White House? When these brave women chose to take their protest to the president’s front door, they blazed a trail for thousands of Americans who have come to Lafayette Park to exercise their right as citizens—their right to be heard.

The NWP pickets began to encounter violent reactions from onlookers after the United States entered the First World War in April 1917. The police began to arrest them and to imprison them under harsh conditions. Many people were shocked when they learned about the women’s treatment. Some lawyers thought the sentences imposed were in violation of the First Amendment. The women continued to demand their rights, in spite of the violence they endured. The 19th Amendment, guaranteeing all women in America the right to vote, finally became part of the Constitution in 1920, three years after the first pickets marched to the White House.

By exercising their First Amendment rights, the women provided a model for many others. Groups and individuals have demonstrated against the Vietnam War, for LGBTQ rights, for and against abortion, and for civil rights. U. S. citizens and foreign nationals also protest on issues or events occurring around the world that they believe the United States should be aware of and become involved in. All of these people have presented their causes and their grievances to the president in Lafayette Park—where he could not ignore them.

"Congress shall make no law respecting an establishment of religion, or prohibiting the free exercise thereof; or abridging the freedom of speech, or of the press; or the right of the people peaceably to assemble, and to petition the government for a redress of grievances."
-  First Amendment to the U.S. Constitution

The new U.S. Constitution was sent to the states for approval in 1787. Many state legislatures strongly criticized it because it did not include specific protections for the individual liberties that Americans had fought for during the Revolution. The Constitution was ratified in June 1788 without a bill of rights, but the first Congress elected under the new system took up the question of adding one as soon as it convened in March 1789.

Eventually, 12 separate amendments were submitted to the states. They quickly ratified all but two of them. These first ten amendments, which became known as the Bill of Rights, entered into force on December 15, 1791.

The Bill of Rights protects the liberties at the heart of the American system of government.  Many scholars think the First Amendment may be the most important of them all. The First Amendment is often at the center of the nation’s bitterest conflicts.

Suffrage, the right to vote, is not one of the rights protected by the Bill of Rights. The Constitution left decisions about who could or could not vote to the states. At the time the Constitution was adopted, most states allowed only property owners and taxpayers to vote.

The vast majority of voters were white men, but white women who met the property qualification could vote in Massachusetts, New Hampshire, New York, and New Jersey. By the early 1800s, all four states had enacted universal white manhood suffrage, but excluded women.

The first call for voting rights for women came in 1848, at the First Women’s Rights Convention, held in Seneca Falls, New York.  By the 20th century, the National American Woman Suffrage Association, the oldest and largest of the women’s suffrage organizations, was concentrating on amending state constitutions to allow women to vote. By 1916, women could vote in 12 western states, but the campaign seemed to have stalled. n 1917, a small group of determined, impatient women set out to extend the vote to all women by amending the U.S. Constitution. The proposed amendment had been introduced in Congress in 1878, reintroduced every year for almost forty years, but never brought to a vote. The women’s attempts to gain the rights of full, participating members of “We the People” would test the ability of the First Amendment to protect the liberties it guaranteed. They picked Lafayette Park, across from the White House in full view of the president, as the stage for their campaign.

Lafayette Park and the White House are both part of the National Park System. Visit the President’s Park website for operating hours, maps, schedules of events, and other information. The site also offers a walking tour that includes Lafayette Square.

The Teaching with Historic Places website contains more than 135 curriculum-based lesson plans on places listed in the National Register of Historic Places.  Decatur House: A Home of the Rich and Powerful discusses Stephen Decatur’s home on Lafayette Square as an example of the importance politically ambitious men and women placed on being in close proximity to the White House in the 19th century. For additional information on the Constitution, see the Independence Hall: International Symbol of Freedom lesson plan.  The M'Clintock House: A Home to the Women's Rights Movement lesson plan highlights the Seneca Falls First Women’s Rights Convention of 1848.

The National Archive's Charters of Freedom web pages present detailed information on the creation and impact of the Declaration of Independence, the Constitution, and the Bill of Rights. The website also includes transcripts and high-resolution digital images of the three documents.

The Teaching with Documents website includes a “Woman Suffrage and the 19th Amendment--Failure Is Impossible” lesson plan. The lesson is based on a script prepared for the 75th anniversary of the 19th Amendment in 1995. The cast of characters includes Abigail Adams, Elizabeth Cady Stanton, Susan B. Anthony, Woodrow Wilson, and others.

This website is a project of the Ashbrook Center for Public Affairs at Ashland University, in Ashland, Ohio. The Ashbrook Center provides an academic forum for the study, research, and discussion of the principles and practices of American Constitutional government and politics.

The Belmont-Paul House is a National Monument. It has been the headquarters of the NWP since 1929. The NWP website includes background on the party and its history and an extensive photo archive.