Today, Beringia is defined as the land and maritime area bounded on the west by the Lena River in Russia; on the east by the Mackenzie River in Canada; on the north by 72 degrees north latitude in the Chukchi Sea; and on the south by the tip of the Kamchatka Peninsula. The huge size of the area, more than 4 million square miles, has prompted many scientists to classify Beringia as a now-vanished subcontinent.

Twenty-five thousand years ago, during what is known as the Last Glacial Maximum (LGM) of the Pleistocene Ice Age, glaciers up to two miles thick covered large parts of North America, Europe, and Asia and much of the earth's water was locked up in the glaciers. Sea level at that time was significantly lower - up to 300 feet - and some areas that are now under water were dry land. The result was a land bridge connecting the continents of Asia and North America in the present day Bering Strait area and extending into the Bering and Chukchi seas. The land bridge was not a narrow isthmus, but rather a huge tundra landscape, bounded by the stocky shoulders of two continents and stretching more than one thousand miles from north to south. Scientists believe that Beringia was at its widest point about 21,000 years ago. While traditionally believed to be a vast, flat, treeless plain, evidence from sediment cores in the Bering Sea suggests there may have been “refugia” of dwarf shrubs and even trees in some places.

Pleistocene glacial and interglacial cycles span over 2.5 million years of Earth’s history. During the cold, dry glacial periods, the emergence of the land bridge allowed plant and animal ranges to shift and mobile species to migrate between the continents. Many species of animals - the woolly mammoth, mastodon, scimitar cat, Arctic camel, brown bear, moose, muskox, and horse - to name a few – ultimately moved from one continent to the other across the steppe-tundra lowlands of the Bering land bridge. Birds, fish, and marine mammals established migration patterns that continue to this day.

The people who became the first North Americans similarly moved onto the land bridge as it emerged and the cold glacial climate settled in with huge ice sheets expanding over Europe and North America. Current genetic research suggests these people were isolated from the Siberian mainland for thousands of years during the last ice age, possibly surviving the cold, harsh climate with the help of fuels from woody shrub tundra species in refugia on the Beringian landscape. While termed a migration, these early human movements were not conscious efforts to populate a new continent, but rather a simple pursuit of food and shelter - the basic necessities of life. As the climate began warming at around 18,000 years ago, the Beringia region also became more moist and the sea level rose, submerging the land bridge and causing the shrub tundra vegetation to expand. The first flooding of the land bridge happened around 10,000 years ago. The first definitive archaeological evidence for human presence in interior Alaska and the Yukon is from about 14,000 years ago during the deglaciation, although some research predicts that earlier finds exist and are just waiting to be discovered.

Today the only remaining land visible from the central part of the Bering land bridge are the Diomede Islands, the Pribilof Islands of St. Paul and St. George, St. Lawrence Island, and King Island. Long after the land bridge was submerged, the peoples of Beringia remain united by languages, traditions, and their environment.

This area provides an unparalleled opportunity for a comprehensive study of the earth and human history. Its unusually intact landforms and biological and cultural remains may reveal the character of past climates and histories and the ebb and flow of earth’s forces at the continents' edge. As one of the world's great ancient crossroads, Beringia may hold solutions to puzzles about who were the first people to populate North America, where and how they lived, how and when they traveled, and how they survived under such harsh climatic conditions. 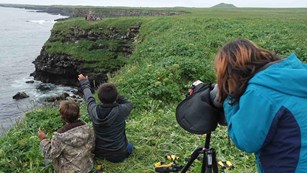 Learn about our new projects. 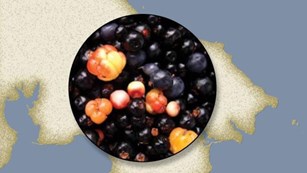 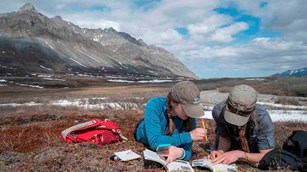 Learn about the parks and partners in Beringia.