Air pollution from power plants, industry, vehicles, and other sources eventually deposits out of the air into natural environments. Airborne pollutants cause harmful effects, such as acidification, soil nutrient imbalances, and loss of biodiversity. Certain ecosystems in national parks are particularly vulnerable to pollutant deposition, including high elevation lakes and streams, alpine meadows, sugar maple forests, and desert shrublands. Critical loads are a valuable tool for assessing ecosystem health and guiding resource management decisions. Because pollutants accumulate in soils and lakes over time, it can take centuries to reverse damage degradation once it occurs. Prevention, therefore, is preferable.

Discover which ecosystems are at risk from nitrogen deposition in each national park.

What are critical loads?

A “critical load” is the amount of pollution that leads to harmful changes in an ecosystem. Critical loads are usually expressed as kilograms per hectare per year (kg-N/ha/yr) of wet or total (wet and dry) deposition.

Critical loads can be used to assess responses to nitrogen and sulfur deposition, including changes in aquatic and terrestrial plant diversity, soil nutrient levels, or fish health. Some ecosystem components are more sensitive than others. For example, epiphytic lichen have low critical loads and are often the first thing to respond to increased pollution, since they acquire all of their nutrients from the atmosphere. On the other hand, many soils have high critical loads, because their structure helps them buffer the impacts of deposition, so they can sustain more cumulative deposition before they begin to change. When critical loads are exceeded, the environmental effects can cascade and impact ecosystem services. For instance, excess nitrogen can act as a fertilizer, encouraging exotic grass species to establish in desert ecosystems. These grasses can fuel wildfires in areas not adapted to fire which can then threaten wildlife habitat, water quality, and homeowner safety. 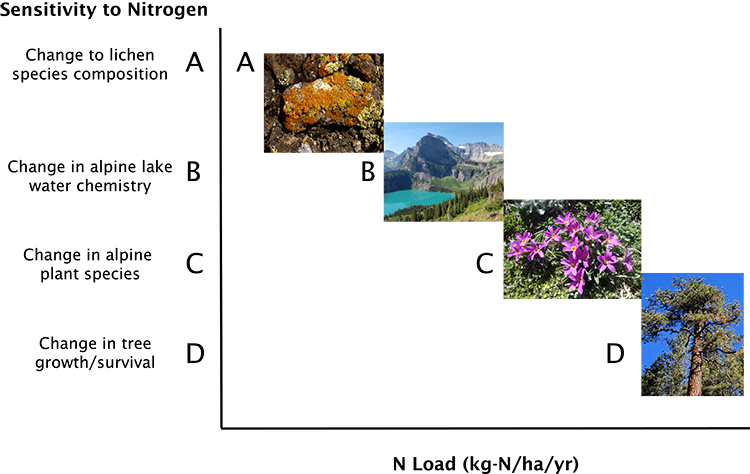 How are critical loads developed?

Scientists are currently expanding and updating critical loads for species and ecosystems across the United States. Critical loads are calculated by using field observations, experiments, and ecosystem modeling.

Direct measurements of ecosystem change are paired with measurements of deposition over a known gradient to determine where changes are occurring. For example, water chemistry measurement from hundreds of western lakes were used to determine critical loads of nitrogen deposition for lake nutrient enrichment. In the Rocky Mountains, this critical load is 3.0 kg/ha/yr of total (wet and dry) nitrogen deposition, while it is 2.0 kg/ha/yr in the Sierra Nevada (Baron et al. 2011).

Scientists are investigating how species and ecosystems will respond to future deposition loads with park and greenhouse based experiments. Studying increasing levels of nitrogen fertilization allows scientists to determine the amount of additional deposition that will lead to a shift in ecosystem function. For example, four levels of fertilization were used at Joshua Tree National Park to determine a critical load for increased invasive grass cover that can lead to the spread of wildfires of 4.0 kg/ha/yr.

A research report published by the U.S. Forest Service compiled atmospheric nitrogen deposition critical loads for ecosystems across the U.S. (Pardo et al. 2011). This report provides hundreds of ecosystem-specific critical loads relevant to all ecoregions in the country, significantly improving opportunities to use critical loads as a management and policy tool.

How are critical loads used?

Critical loads are valuable tools for evaluating and communicating ecosystem condition to policy makers and the public. Understanding how much deposition increases the risk of change allows land managers to plan active management of sensitive resources and respond to potential pollution sources that exist within and outside of a park.

Critical loads are used in models that project how ecosystems will respond to future deposition levels. Models provide insight into how changing emissions are likely to improve the health of the ecosystem, or in areas where pollution is increasing, when to expect harmful effects.

Setting a target load plays an important role in guiding regulatory or voluntary measures to reduce air pollutants. Target loads can be set and communicated to the public via land management planning processes and other collaborative forums, and provided as input into air pollution permit reviews and NEPA processes.