Started in 1870 by Lucy Stone, Julia Ward Howe, and other local leaders, the Massachusetts Woman Suffrage Association (MWSA) served as the leading suffrage organization in the state. MWSA originated as a stand-alone organization that worked closely with regional and national organizations. By the 1880s, towns and neighborhoods across Massachusetts created smaller branches that reported to the main organization in Boston.1 First headquartered at 3 Tremont Place, the MWSA offices moved several times throughout its long history; later office locations include 3 Park Street, 6 Marlborough Street, and 585 Boylston Street.2

MWSA members used a variety of tactics to garner support for the suffrage cause, from petitioning the state legislature and speaking at hearings to creating broadsides and holding lectures. Its early efforts led to the success of women gaining the right to vote in school committee elections in 1879.3

By the early 20th century, the MWSA stood as one of the largest state organizations in the country. New leaders shifted the organization’s tactics to more public and direct action, such as outdoor rallies and suffrage parades.4 One of these actions included “Suffrage Bluebird Day” in 1915, during which suffragists posted thousands of metal bluebirds on fences, trees, and public spaces in towns and cities across the state to gain support for their cause.5 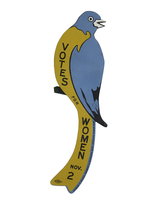 The Suffrage Bluebird, MWSA's symbol in 1915. (Credit: The Smithsonian Institute, Library of Congress)