“Frequently it became too hazardous to board fugitives among their own people…Under such circumstance safe harborages were found without expense among the white abolitionists. One such refuge was in the house of George S. Hillard…” - Boston Evening Transcript, 19261

George and Susan Hillard resided at 62 Pinckney Street from 1846 until the early 1870s. George Hillard worked as a law partner of Charles Sumner, until Sumner became a U.S. Senator. Even though Hillard acknowledged the injustices of slavery and supported racial equality, especially in education, he sided politically with Senator Daniel Webster and did not want to risk the dissolution of the nation to end slavery. Hillard also worked as a federal commissioner, meaning in 1850 he had to uphold the new Fugitive Slave Law by giving out arrest warrants to slave catchers.

While George Hillard worked as a federal commissioner, Susan Hillard identified as a staunch and active abolitionist. As early as 1850, Susan began harboring freedom seekers in their home, and George’s public reputation as a Webster Whig removed any suspicion that the house operated as a stop on the Underground Railroad.2

Notably, the Hillards protected Ellen Craft in their home when slave catchers sought to arrest her and her husband William under the Fugitive Slave Law. Susan Hillard recalled her husband saying, “I am perfectly willing to meeting the penalty, should [Ellen] be found here, but will never give her up.”3 They continued to assist freedom seekers over the following years. Records indicate that between 1855 and 1858, Susan and George Hillard opened their home to at least five freedom seekers, including a woman, Phillis Gault, and later her nephew, Dick Page, of Norfolk, Virginia.4

Years later, a 1926 Boston Transcript article recognized the Hillards’ home as a site on the Underground Railroad and described one of the possible hiding spaces in the house. It stated:

Only a few years ago, when some repairs were being made in the plastering of the ell, a well-concealed trap door in the ceiling of a closet unexpectedly dropped upon the head of a workman, revealing an unfinished space under the lean-to roof large enough to hold several human beings. This place was without windows, but it was ventilated in a measure by an opening into a shaft under a skylight. Recalling the tradition that this house had been a station on the ‘Underground’ in Mr. Hillard’s time the then owner had the place explored, with the result that two tin plates and two iron spoons were found on the floor.5 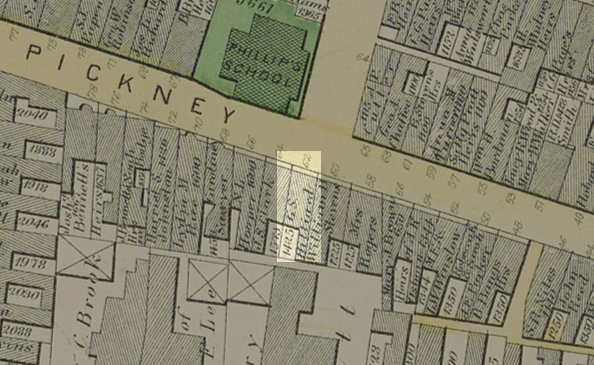