Finished in 1852, Boston’s Music Hall served as the city's first concert hall.1 After the Hall’s completion, Gleason’s Pictorial declared it “an ornament to our city, and is probably unsurpassed for architectural excellence and beauty in this country.”2 For its first fifty years, Music Hall hosted special events, conventions, and musical performances. Abolitionists, suffragists, and civil rights activists often booked Music Hall for events and lectures. The renowned Boston Symphony Orchestra played at the Hall before moving to Symphony Hall in 1900. In 1906, Music Hall converted to the Orpheum Theatre, which held concerts, performances, and eventually moving picture shows.3 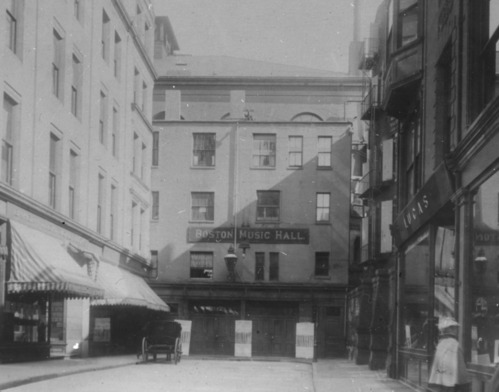 In 1853, suffragist Wendell Phillips gave a sermon titled “The Ideal Public Function of Women,” in which he argued that women have the same rights and abilities as men in all aspects of public life. Speaking of political rights, Phillips declared, “Looking at it as a matter of pure Right and pure science, I know no reason why woman should not be a voter, or hold office, or make and administer laws.”4

Music Hall also housed the earliest suffrage bazaars and annual meetings of the New England Woman Suffrage Association (NEWSA) and the Massachusetts Woman Suffrage Association (MWSA). Notably, suffragists at the 1886 suffrage bazaar in Music Hall launched the first Woman's Suffrage Cookbook. Edited by local suffragist Hattie Burr, both local suffragists and those from across the country eagerly contributed to this publication and fundraiser.5