Enclosed by Deer Island to the north and the wide arm of Hull to the south, Boston Harbor is a famously complicated navigational harbor with shallow channels, many of the Boston Harbor Islands, submerged bars, and strong currents. Offering a diverse array of ecosystems as well as integral shelter, the Harbor and its islands have been a vital resource for inhabitants of the area for thousands of years.

Boston Harbor served as a major trading port for the English colonies during the 1600s and 1700s, as ships carrying commodities often made their way through Boston before traveling down the coast. Boston and its harbor served as a significant stop in Atlantic trading routes, supporting an empire that trafficked enslaved individuals and traded goods consumed and produced by enslaved labor.

Due to its strategic location, Boston Harbor became a center of conflict during the era of the American Revolution. As punishment for the 1773 Boston Tea Party, Parliament passed the Boston Port Act in 1774, which closed Boston Harbor to all ships. The first of what became known as the Coercive (or Intolerable) Acts, the Boston Port Act contributed to the organizing of the First Continental Congress later that year. During the Siege of Boston in 1775 and 1776, skirmishes between British forces and colonial militia occurred across the islands as both sides battled for control of the Harbor and its resources. British forces eventually left Boston Harbor in June 1776. 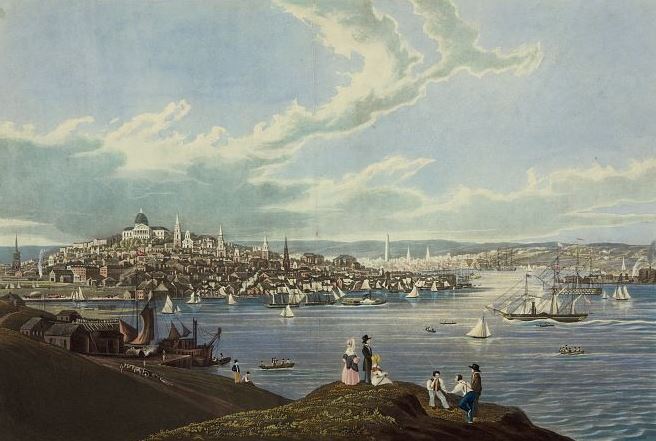 "View of the City of Boston from Dorchester Heights" (Credit: Library of Congress)

Maintaining its status as a fortified port and trading center throughout the 1800s, Boston Harbor played a significant role during abolition. Many enslaved individuals, especially those coming from states along the coast, utilized ships bound for northern ports to gain their freedom. A center of strong anti-slavery activism, Boston became a natural destination for stowaways seeking their freedom. As Thomas Wentworth Higginson wrote when reflecting on his time assisting freedom seekers, "Fugitive Slaves commonly came by water, as stowaways on vessels…"1

Boston Harbor later became the center of an ecological revolution in the 1900s. For much of the past four centuries the harbor has been indiscriminately used as a dumping spot for detritus (dead organic material) and human waste, leading to its reputation in the 1980s as the "harbor of shame." That all changed in 1984 with a court–ordered cleanup and the establishment of the Massachusetts Water Resources Authority, which oversaw the Boston Harbor Cleanup and the construction and operation of the Deer Island Wastewater Treatment Plant, which maintains clean harbor waters today.