Blackwell’s Island, now known as Roosevelt Island, has a deep connection to disability and incarceration. For much of the early 1900s, New Yorkers nicknamed the island Welfare Island after the asylums, prisons, and almshouses that were built there. While most of the buildings have long since fallen into disrepair, the ruins are listed on the National Register of Historic Places. The dilapidated structures are also listed as a New York City Landmark, and they are the only ruins in New York City to be a local Landmark. This unique designation points to the social and historical significance of this island.

New York City purchased the East River island in 1828. In 1832, a penitentiary was built on the island. This physically isolated prisoners from the city and from the mainland. However, prisoners were not the only inmates on Blackwell’s Island. Nineteenth century Blackwell’s Island was also home to a complex of workhouses, a general hospital, an almshouse, a hospital for “incurables,” and —for a time— a smallpox hospital. At the time, the word “incurables” referred to people with chronic or severe conditions that were not likely to be cured. These individuals, many with mental or physical disabilities, may have had trouble caring for themselves at home. In 1839, seven years after the penitentiary opened, the New York City Lunatic Asylum, first in the city, began accepting patients at Blackwell’s Island. 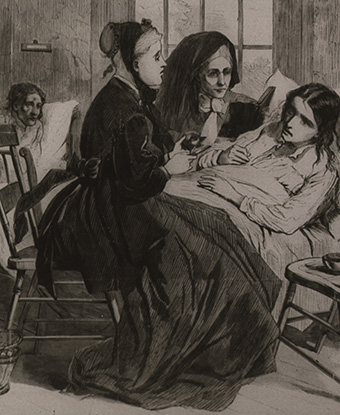 Blackwell’s Island received national attention after investigative journalist Nellie Bly, born as Elizabeth Cochran Seaman, published a report of her time in the Women’s Lunatic Asylum. The 1887 book, Ten Days in a Madhouse, chronicled the abuses that Bly encountered after she went undercover as a mentally ill patient at Blackwell’s Island. While the male patients had been transferred to a new facility on Ward’s Island, the now-women’s asylum remained overcrowded. Bly described cold baths, filthy living conditions, spoiled food, and physical abuse from caretakers. This exposé pressured Blackwell’s asylum and other facilities to consider more humane treatment options for patients.

In the early 1900s, the last asylum patients on Blackwell’s Island were moved to other hospitals. The Metropolitan Hospital occupied the asylum building, and Blackwell’s Island was renamed Welfare Island in 1921. When the Metropolitan Hospital moved out of the building in 1955, the old asylum was left empty. Like most of the original buildings on Blackwell’s Island, the asylum fell to ruin. Damaged by exposure to the elements and fire, Blackwell’s once-expansive network of prison and medical buildings are now unrecognizable. The asylum is marked by an octagonal tower. The tower is the only part of the original building that remains standing.

In 1973, the island was named after President Franklin Delanore Roosevelt, who lived with polio throughout his life. In renaming the island after President Roosevelt, New York has made strides in honoring disability history. As the Telling All Americans’ Stories: Disability History Series indicates, people with disabilities have often been forced into poverty, prisons, or hospitals in our country’s history. Nonetheless, people with disabilities, like President Roosevelt, have lived and worked in many places, and they have played an important role in building American history.

Notes on the buildings:

The Octagon, built originally in 1834 as the main entrance to the New York City Lunatic Asylum which opened in 1841, remains standing. It was listed on the National Register of Historic Places on March 16, 1972. It was documented by the Historic American Buildings Survey.

Other buildings on Blackwell’s Island that have been documented by NPS programs include: