Born free in 1799 in Newburyport, Massachusetts, Nancy Prince grew up in a family with a long history of enslavement and self-emancipation.[1] Just three months after her birth, Prince’s father died, and her mother remarried a man named Money Vose. Prince recalled, “My stepfather was stolen from Africa, and while the vessel was at anchor in one of our Eastern ports, he succeeded in making his escape from his captors, by swimming ashore.”[2]

Prince also enjoyed a close relationship with her maternal grandfather, Tobias Wornton, or Backus, who spent a portion of his life enslaved to a ship captain from Gloucester, Massachusetts.[3] From a young age, Prince became well-acquainted with the horrors of slavery and the courage of self-emancipation.

As an adult, Prince moved to Boston in search of work to support her family. Baptized by the Reverend Thomas Paul at the African Meeting House in 1817, she joined the free Black community on the north slope of Beacon Hill.[4] In 1824, Prince married her husband, Nero Prince, who served the Russian Princess Purtossof. A few months later, she moved to Russia with him.[5] For nearly a decade, they resided in Russia until her declining health forced her to return to Boston. Prince departed Russia ahead of her husband, who died before he could follow her.[6]

Over the following years, Prince made several voyages to Jamaica to participate in anti-slavery work, always returning to Beacon Hill where she remained an active and visible member of her community.[7] In the spring of 1839, Prince delivered lectures on Russian culture at the Abiel Smith School and the AME Zion Church on Cambridge Street.[8] That same year, she became a founding member of the abolitionist organization the New England Non-Resistance Society.[9] By 1840, Prince had established herself as a dedicated abolitionist, in part due to her continued membership in the Boston Female Anti-Slavery Society. 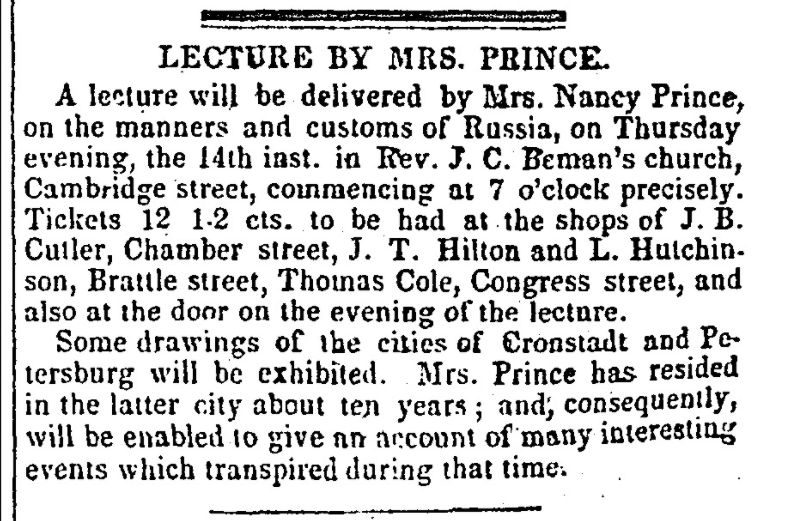 Published in an 1839 edition of the newspaper The Liberator, this article advertises a lecture to be delivered by Nancy Prince on “the manners and customs of Russia,” in Boston at the AME Zion Church. (Credit: Boston Public Library)

Her fervent abolitionist beliefs led to a physical confrontation with a slave catcher. In 1847, a slave catcher named Woodfork arrived in Boston to arrest a suspected fugitive on the north slope of Beacon Hill. As many Bostonians deduced, Woodfork sought to recapture Mrs. Dorsey, “…a woman who, by some means, had succeeded in shaking off oppression’s yoke and reaching Boston.”[10]

In the mid-morning, at a time when all the men were away at work, a commotion arose at the end of Smith Court. A group of young boys reported that a slave-catcher had entered Mrs. Dorsey’s house. Led by Nancy Prince, the women of the neighborhood immediately responded, coming to the rescue of Mrs. Dorsey. Bostonian Thomas B. Hilton recounted the moment:

Only for an instant did the fiery eyes of Mrs. Prince rest upon the form of the villain, as if to be fully assured that it was he, for in the next moment she had grappled with him, and before he could fully recognize his position she, with the assistance of the colored women that had accompanied her, had dragged him to the door and thrust him out of the house.[11]

In the moments that followed, the slave-catcher Woodfork made a hasty departure from the scene, aware of his inability to recapture Mrs. Dorsey. Hilton recalled that Woodfork did not return to the north slope of Beacon Hill, nor Boston, for another three years. With little warning and few resources, Nancy Prince and the women from her community successfully protected a woman from recapture and ejected a slavecatcher from the city of Boston.[12] 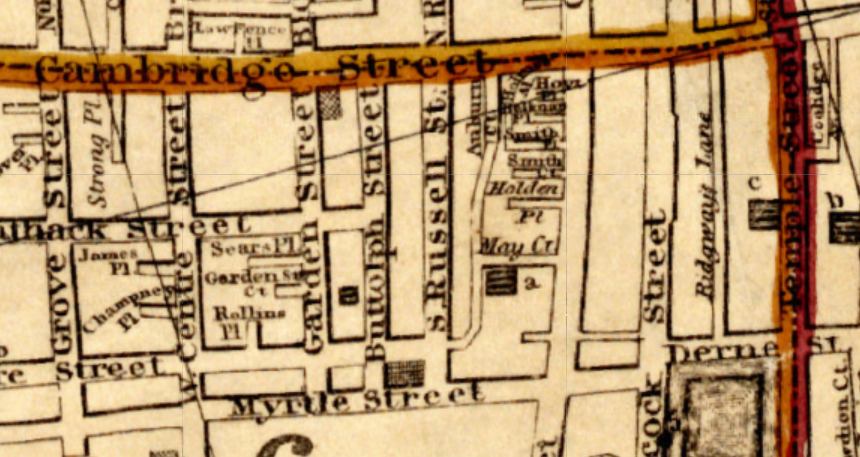 This image of the 1875 Boston Smith map depicts the north slope of Beacon Hill. Just to the right of S. Russel St. sits Smith Court, where Prince and other women from her community rescued Mrs. Dorsey from the slave catcher Woodfork. (Credit: MapJunction)

On November 6, 1859, Nancy Prince passed away at the age of sixty in Boston.[13] Her leadership in the Woodfork incident and membership in local abolitionist societies reveal a woman resolute in her beliefs and determined to enact change within her community.