Dr. Kazue Togasaki was one of the first Japanese American women to become a doctor in the United States. She was born and raised in San Francisco and delivered over 10,000 babies in her long career serving the Japanese American population in the city. She was strong willed, brave, and always stepped up for her community. Dr. Togasaki is an incredible gem in the history of San Francisco.

Kazue Togasaki was born 1897 in San Francisco. She was one of eight children and was described as "strong willed" by her family. Her parents immigrated from Japan before her birth and owned a successful shop in the city. Her father studied to be a lawyer in Japan but was not allowed to practice in the United States. As a child, Togasaki was forced to switch elementary schools because of segregation against Asian Americans. A defining moment of her life happened when she was 9 years old in 1906 when the city was decimated by an earthquake and devastating fires. She said of the experience, " I remember we got dressed and walked from our house to 14th and Church where there was a hill, and that afternoon and for two days in the daytime we sat, watching the city burn." After the earthquake her mother helped turn their church into a makeshift hospital. After the earthquake her mother helped turn their church into a makeshift hospital. As a child, Togasaki helped at the hospital by taking care of the wounded. She also accompany Japanese American women to the hospital to act as their translator. Her experience with this catastrophe inspired her and much of her family to go into medicine.

Togasaki received a degree in Zoology from Stanford but struggled to find work as a Japanese American Woman in San Francisco. She was accepted into a nursing program at a Children's Hospital and finished at the top of her class. Even with this accomplishment, she still was not hired. "They had accepted me in the program, but I still couldn’t work here — the climate in San Francisco was that they just “didn’t use” Japanese nurses; the staff wouldn’t have it." She decided to leave San Francisco and go to medical school in Philadelphia. After receiving her degree in 1933, Togasaki moved back to San Francisco where she started a practice, bought a home, and began to build a life for herself. All five of her younger siblings followed in her footsteps and went into careers in the field of medicine.

Then Japan bombed Pearl Harbor on December 7, 1941 and everything changed. In response, on February 19, 1942, President Franklin D. Roosevelt issued Executive Order 9066, giving the U.S. Army’s Western Defense Command, headquartered at the Presidio of San Francisco, the option to create zones where “enemy aliens” could not go. Commanding Lt. General John L. DeWitt decided to remove all 120,000 people of Japanese ancestry from the Pacific Coast, whether U.S. citizens or not. On March 2 he ordered them sent to 19 internment camps across the West. With such short notice, people could only bring what they could carry. The order forced many families to quickly sell their homes, businesses and farms at an enormous economic loss. 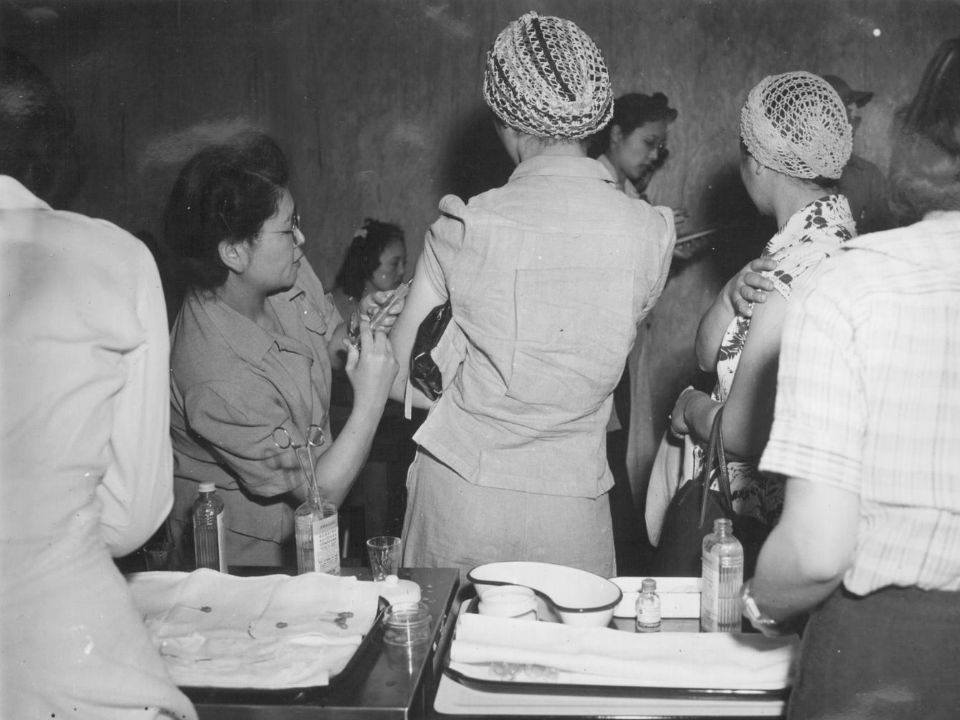 Togasaki was initially sent to Tanforan Assembly Center at the Tanforan Racetrack in San Bruno, California.

"They just told us, on such and such a day be ready to leave. They had big buses and you were allowed to take only two suitcases, whatever you could carry."

Assembly centers were holding areas where people were sent on their way to more permanent camps. The conditions were abysmal. Togasaki set up the medical facilities at the center, leading other Japanese American medical professionals who were being held there. She took charge and created a safe space for her community to receive care. In her first month at the center she delivered over 50 babies. She was moved to several different centers and provided care and leadership everywhere she went. From Tanforan she was sent to the Stockton assembly center, then to the Tule Lake, Poston, Manzanar and Topaz relocation centers.

When Togasaki was released in the Fall of 1943, she returned to her home in San Francisco. It was absolutely destroyed.

"Everything was stolen. By the time I got back a year or two after the war, there wasn’t much left, all my good things were gone. And I think that happened to most of the Japanese." Togasaki was forced to start from scratch. She reopened her practice and her community embraced her with open arms. "Everybody was happy to see a Japanese woman doctor. In all the years before I retired, there was only one other Japanese woman doctor in this area."

She continued to serve her community for the next 40 years. She had a reputation of caring for others even if they did not have the financial means. She was named one of the "Most Distinguished Women of 1970" by the San Francisco Examiner. After a long career, Togasaki passed away in 1992 at age 95. 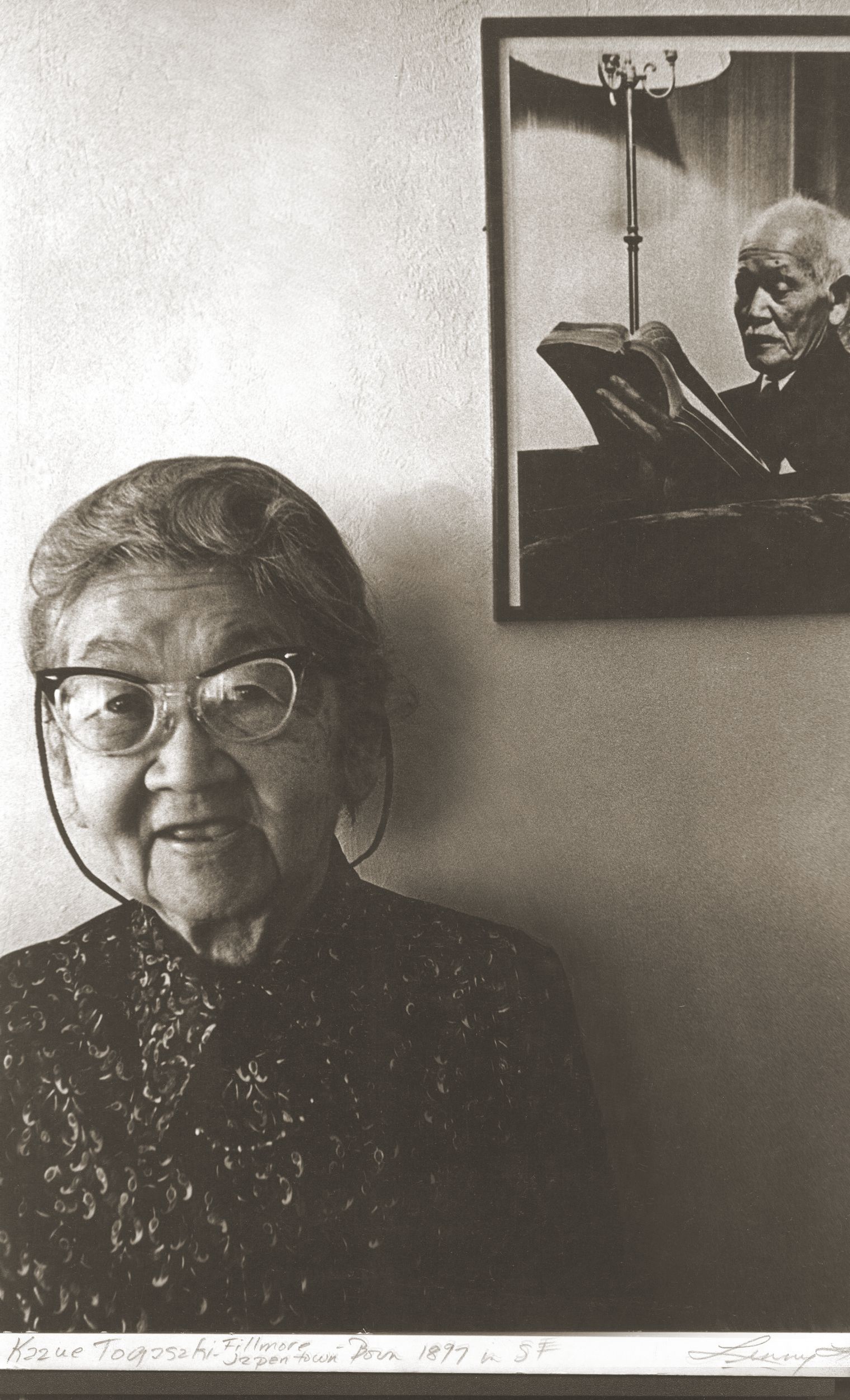 Dr. Kazue Togasaki was an incredible and under-recognized force. She was a pioneer for Asian American Women in the field of medicine. She stepped up and took care of her community when the government incarcerated innocent Americans as criminals. Togasaki saw the city of San Francisco burn as a child, and she contributed to making it the thriving, diverse, and incredible city that San Francisco is today.