The construction of the lighthouse on Michigan Island in 1856 brought with it the need for a staff to maintain the landscape, lighthouse, the lamp, and associated outbuildings. From its inception until 1943, when the lighthouse became fully automated, the island was populated by persons who committed themselves to making sure the lamp remained lit through the best and the worst of times.

Who were these hardy and dedicated souls who gave up so much to ensure the safety of people they neither knew nor would ever meet? While the careful and consistent operation of the lighthouse was essential to Great Lakes shipping, without the devoted efforts of those assigned to keep the lighthouse in operation, it is certain the number of accidents and deaths would have increased each year.

Living on an isolated island with no assurance of frequent contact with the mainland asked a lot of the hardy residents who dedicated their lives to the safety of ships and passengers on the water. “The recipe for a Lake Superior lighthouse keeper was relatively simple: to a job requiring twenty-four hour a day dedication, add periods of intense hard labor, sprinkle in stretches of mind-numbing boredom, toss in some of the most desolate and inhospitable locations found anywhere and stir in a large portion of the most treacherous waters to be found anywhere on the face of the Earth.”[1] Only the best-trained and most reliable persons were chosen as lighthouse keepers. The men and women chosen to maintain the lighthouse were selected because they were dependable, they could work without the need for supervision, and, perhaps most importantly, because they possessed the ability to remain calm in the worst of weather-related situations.

While lighthouse keepers were expected to always be on duty, there were times when a family member made the trip across the lake to small towns located on the Bayfield Peninsula. The need to return to the island before dark allowed for few, scant hours in those towns. Otherwise, they were forced to spend the night in a hotel or with friends who lived onshore. In many cases, school-aged children lived off the island with relatives or friends. Without these short but badly needed excursions away from Michigan Island, families of lighthouse keepers spent weeks and months without the company of friends or relatives. This was especially true during the winter months when lake conditions made the journey from the island to the shore especially treacherous.

The Michigan Island lighthouse opened in 1856 but closed soon after when the lamp was extinguished in 1858, and the lighthouse and associated buildings lay unoccupied for approximately ten years. After restoring the light station to full duty in 1868, the first lighthouse keeper of note was Roswell H. Pendergast, a thirty-seven-year-old, New Hampshire-born nurseryman who moved to the island in 1869. In an era when consumers paid forty-one cents for a pound of coffee or a yard of cotton flannel material, Mr. Pendergast received an annual salary of $560. In 2019 values, his salary equates to a sum of approximately $10,671.

Thirty-year-old Helen Pendergast, married to Roswell Pendergast, was hired as the assistant lighthouse keeper on Michigan Island. Women lighthouse keepers were notable at that time both because held federally-appointed jobs and because they earned wages commensurate with men who performed the same tasks. In several cases, female keepers supervised lower-paid male assistants. This was several years before the 1920 ratification of the 19th Amendment, in an era when women were prohibited by federal law from voting in national elections or holding elected positions.

Before each of Lake Superior’s lighthouses became automated, more than sixty women held positions of authority at many stations in the Great Lakes region. Many of the women who held the position of lighthouse keeper were the widows of former keepers, moving into the leadership position on the same level of knowledge and experience as the men who had served before them. The United States Lighthouse Board, the governing body for lighthouse regulations in the nation, recognized these women’s contributions to Great Lakes shipping and rewarded them accordingly. Almost every female keeper also performed the roles of mother, cook, teacher for children isolated by the station’s remote locations, and spouse.

Pliny and Matilda Rumrill replaced the Pendergasts in 1874 and remained on Michigan Island as principal lighthouse keepers until 1883. Working together to ensure the lamp remained lit and the lighthouse remained fully functional, the couple worked in shifts to ensure the island’s beacon was seen far out into Lake Superior. Following the Rumrills, John Pasque performed principal lighthouse duties until he resigned in 1893. He was replaced by twenty-eight-year-old Robert Carlson and twenty-one-year-old Anna Maria Carlson, a native of Sweden.

Maintaining the light may have been the primary responsibility of the keepers, but it was not the sole activity of life on Michigan Island. Once the lighting apparatus was prepared for the coming night, the keeper performed routine maintenance and minor repairs. Some undertook larger improvements and construction projects. Lighthouse families kept gardens to supply their own tables, and several also sold produce and eggs or fished for supplemental income. Roswell and Helen Pendergast planted a nursery of several thousand fruit trees on the island and sold shrubs and fruit trees to residents on the mainland. The majority of the trees were apple, but they also planted pear, plum, cherry, and peach trees, although the last apparently did not thrive. The Pendergasts grew oats, corn, beans, and potatoes and raised chickens.

Beyond providing the necessities of life and additional income, some of these landscape uses show how the lighthouse keepers found opportunities for leisure. Flower gardening was a favorite pastime of many of the lighthouse keepers. Elizabeth Lane raised three children on Michigan Island where her husband, Ed, was keeper from 1902 until he retired in 1938, the longest term of any keeper at a single Apostle Islands lighthouse. Elizabeth Lane was known as a superb gardener. Coast Guard Chief Walter Parker, who knew the Lanes, said of Elizabeth, “How she used to love to get up to that island and get at that garden of hers. That whole station was one mass of flowers.”

The Heroine of Michigan Island

Of the many tales describing the hardships of living in near seclusion on an island on Lake Superior, perhaps none is more intriguing than that of Anna Carlson. Robert Carlson was hired as the Michigan Island lighthouse keeper because of his extensive experience as the keeper on several other islands in the region. Following the example of Roswell Pendergast and Pliny Rumrill, Carlson hired his wife as his first assistant. In addition to performing regular household and parenting duties, Anna assisted Robert in the rescue of eleven men stranded aboard the sinking fishing tug Ora Endress. For their efforts, Robert received an official commendation from the Lighthouse Board. Anna, on the other hand, received nothing.[2]

Anna Carlson’s story doesn’t end with the Ora Endress, however. She became known as the “Heroine of Michigan Island” when Robert disappeared while on a fishing expedition with his brother. The men were swept out into Lake Superior, known for its for sudden periods of severe weather, and remained missing for four days. While freezing rain, snow, dense fog, and sub-zero temperatures blanketed the region, Anna had no choice but to ensure the lighthouse beacon continued to shine while caring for three small children. As she described that experience, “Women who wait in brightly lighted cities with people all around within call of the voice have no conception what it is to sit and wait for your man on a deserted island, with snow and ice everywhere and no light but the stars.”[3]

Robert Carlson was able to make his way back to the light station at Michigan Island. He and his brother made their way across several ice floes to Madeline Island where they made a fire, boiled flour to make a sort of gruel, and discovered an abandoned fishing boat. Robert returned to the safety of Michigan Island after four long days and nights. Anna described his approach at the rear of their residence on the fourth day, “I was doing some task about the kitchen that afternoon when I heard my husband’s voice. ‘I’m all right, Anna,’ he called to me."

Robert remained confined to his bed for two weeks, while Anna nursed him back to health and continued to ensure the lighthouse remained in operation. Robert Carlson left Michigan Island in 1898 and retired from the lighthouse service in 1931.

For her efforts, the Lighthouse Board honored Anna by appointing her as the Assistant Keeper on Marquette Island when Robert transferred there prior to his retirement. To show her relief at never having to face the intense boredom and equally intense excitement of a lighthouse keeper after Robert left the lighthouse service, Anna wrote, “…now we are free. Now we have a home where we have always wanted it – and where we can see life.”[4]

After Robert Carlson’s departure from Michigan Island, seventeen men – some with families – served as lighthouse keepers or assistants on Michigan Island. The last to hold the position was Robert Westveld, appointed in 1935 and reassigned in 1943 when his services were no longer needed due to the lighthouse and fog station becoming fully automated.

The Heroine of Michigan Island

From its inception as a nineteenth-century light station to contemporary times, the small but vital site continues to play a central role in safely guiding ships of all sizes from one port to another. The new (1929) Michigan Island light tower is still an active aid to navigation and is one of the tallest light towers on Lake Superior. Both the 1929 and 1856 lighthouses are open seasonally for visitation.
Part of the National Park Service’s Apostle Island National Lakeshore, Michigan Island continues to serve simultaneously as a connection to the past and the present. The spatial composition of the light station, an important contributing feature to the cultural landscape, has significantly changed from the island’s early history as an aid to navigation. While the spatial relationship between the light station’s buildings, structures, and small scale features remains in place from the period of significance, the size of the surrounding clearing has been greatly reduced due to forest encroachment. Once the island was no longer operated as a light station with a light keeper, the forest vegetation was not cleared as regularly.

Guided by a 2011 Cultural Landscape Report and treatment plan, the NPS has set out to partially restore the Michigan Island landscape of the 1920s. Crews have cut back encroaching forest trees and brush, recreated the stone planters and flowerbeds built by Elizabeth and Ed Lane, and replanted a portion of the Lane’s apple orchard. An accessible walkway was built to the side entry of the old lighthouse, and museum exhibits on the history of the light station were added to the rehabilitated interior. The park concession boat has added four weekly trips to the island to visit the newly rehabilitated station and exhibits. New generations of visitors again walk the grounds, enjoying the island gardens originally created by the Pendergasts and the Lanes.

One of the of twenty-two islands that make up the Apostle Island chain, Michigan Island can be a challenge to visit because of its isolated location so far out into the lake. But for those open to adventure, it is the ideal site to imagine the life associated with the original lighthouse setting. 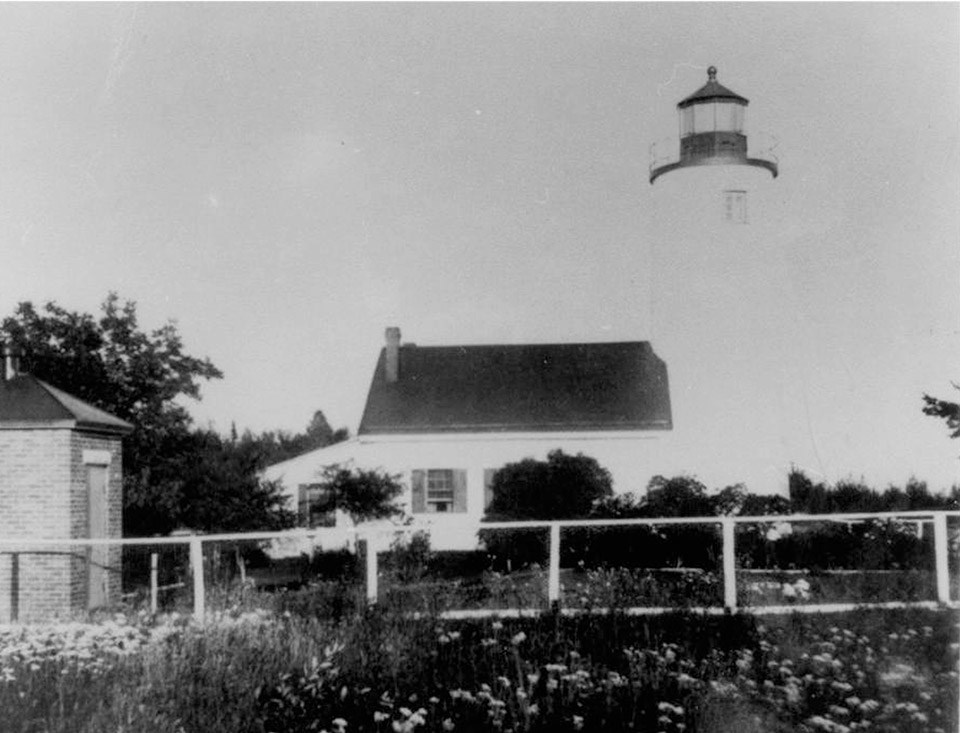 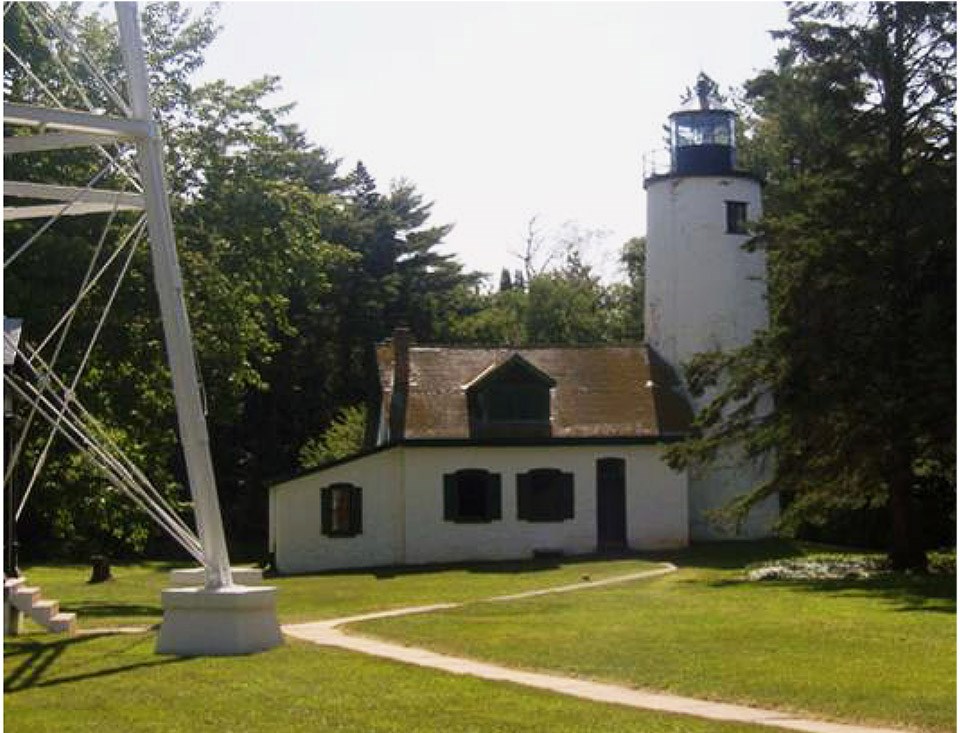 Two views of the Old Michigan Island Lighthouse reveal how the landscape has changed over time. Note the lawn that was once covered by meadow, the encroaching trees, the new light tower to the left, and the fence.