When the salmon return to spawn in the Lake Clark Basin in late summer and fall, all of life changes. People and animals alike converge to witness and take part in one of the largest wild salmon migrations on the planet. For inland Dena’ina families, the arrival of the salmon is a time not only for harvesting a large part of the year’s foodstuffs, but for celebration, sharing, and reunion with family and friends. Village residents, as well as those who have moved away, reconvene in the summer and sometimes the fall, not only to harvest and preserve salmon in quantities sufficient to sustain each family, but also to fulfill personal emotional, cultural, and social quotas.

The methods by which salmon are caught have varied through time. Historically, Dena’ina fishers employed veł niqak´idezehi, (seines) and tuqesi (spears) to harvest gh’elica (red fish), and taz´in (fishtraps) to capture a variety of fish species including salmon and species like whitefish, trout, grayling, and pike. As Linda Ellanna and A. Balluta write, “Historically, both set and dip nets were made of spruce roots and sinew. King salmon were taken with a harpoon-like spear constructed with a head attached to a line and shaft—a tool referred to in Dena’ina as dineh.” Interviewees for the current study note that salmon were not only traditionally speared, but were caught using bow and arrow by some. Today, salmon are especially harvested using gillnets and beach seine nets.

Summer salmon processing at fish camps, and especially Nondalton Fish Camp (Nundaltin Q’estsiq’), is arguably the most important and enduring traditional subsistence practice found in the inland Dena’ina world. Situated at the outlet of Sixmile Lake where it enters Newhalen River (Nughil Vetnu), “Fish Camp” is not only a place, but as the name implies, an event, a practice, a temporary community, a way of life. Most fundamentally, Fish Camp is the venue for harvesting much of the salmon eaten by the inland Dena’ina community.

Over the centuries, the locations of fish camps have been established based on intimate knowledge of fish behavior and migration. Such camps were created at places where salmon were known to be predictable, in places where families had both easy physical access and rights to fish in the particular location. Also, the river was and is predictable in its characteristics—with harvesters wishing to avoid places with too much or too little current. Thus, Bill and Martha Trefon explain that “‘[t]hey pick where the current is or eddies where all the slime could wash away. Or where they think it is easier to set the net. …You never see a fish camp where there is too much eddy. You choose it where the slime will wash away by moving water.’” As the salmon return to these camps each year, so too do entire inland Dena’ina communities. Historically, there were many salmon fishing camps distributed broadly throughout the landscape, each situated to take maximum advantage of the two-cycle salmon fishery in the Lake Clark Basin and its subbasins within the study area. During the fishing season, camps were historically located approximately one to two miles apart from each other. Families often moved between fish camps for many reasons—environmental, social, and otherwise. While many of these fishing camps have persisted in small ways, with individual families or groups of families using formerly large camps as fishing outposts, the use of many camps has declined. Multiple factors have contributed to this contraction, from a declining harvest associated with the loss of dog teams, to localized flooding; from the introduction of the outboard motor to rising gas prices; from scheduling conflicts with paid employment to the ease of ATV access across summertime trails; from increases in brown bear numbers to an increasingly complex maze of land ownership and regulation.

“The most important places is the fish camps. …Fish Camp is important because that’s where we put up our fish for the winter, for our winter supply of fish…that’s the only time that we could put up our dry fish, and canned fish, and salt fish, freeze fish, and that’s the important thing." –Olga Balluta

During the fish harvest, much eating, visiting, and shared labor transpires, as well as moments of gender-differentiated time allowing for moments of “men’s talk” or “women’s talk” throughout the day. Shared labor affords space to catch up on family and community news, and to teach children fishing skills and other traditional knowledge. Intergenerational reminiscing and the sharing of family lore and history take place, as well as public displays of humility, respect, and thanks-giving for food received—food that will sustain families in the year ahead as it has sustained the ancestors for generations. “Fish Camp gives back—it’s not just taking fish…but you have to be here for the whole month to really get that benefit.” (Karen Evanoff) A key facet of Fish Camp is that work is not an activity separated from family and social life; work and social life are integrated. In fact, valuing subsistence-related “work” only as utilitarian is viewed as dysfunctional and inconsistent with traditional practice.

Participation in the multigenerational event of Fish Camp, centered on the salmon harvest and situated in a specific, meaningful place, helps to maintain the integrity of community and culture in a distinctive way. With elders, adults, and children gathered together for shared labor and social time, Fish Camp facilitates the transmission of deep cultural knowledge, reaffirming the ecological, social, and cultural values that define the inland Dena’ina people. “Fish Camp is important. It is a sacred place and we enjoy it. It is part of what you do.” (Gladys Evanoff) In many respects, Fish Camp is key to inland Dena’ina identity and to the survival of the inland Dena’ina as a people.

Today, Nondalton Fish Camp represents a continuation of traditions that predate widespread movement out of Kijik Village. Prior to that move, fish camps on Kijik River and along the shores of Qizhjeh Vena (Lake Clark) were perhaps the best known and most culturally significant fish camps in inland Dena’ina territory.

“Everybody go up to Kijik Lake and they have a fish camp there. He said everybody goes up there and they put all their food and fish away. And, you know, they’re cooking their fish heads and tails, and they’re baking fish and they holler one kind of word and everybody gather around to eat their lunch and you know, then go back to work again. So, you know, it was a community effort. Everybody worked together and at that time it was to save food, you know—to save." –June Tracy

Content for this article is from the traditional use study entitled "Respect The Land, It's Like Part Of Us."

Read the Traditional Use Study 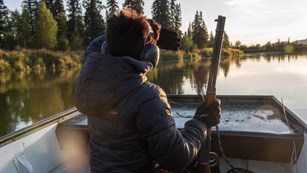 Scope out more on the traditional hunting and trapping methods of inland Dena'ina people. 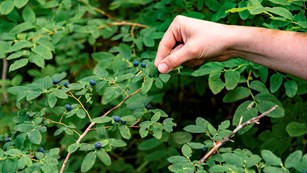 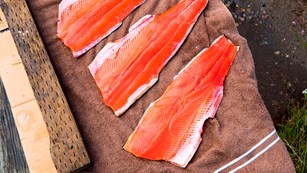 Subsistence: The Ethics of Taking

Discover how inland Dena'ina people sustainably live from the land.