Increased demand for brass, an alloy of copper and zinc, during World War I resulted in a zinc mining boom in the United States. Manufacturers required zinc for weapons, ammunition, and common materials: roofing, water tanks, cemetery headstones, paints, and rubber. The established zinc mines at Rush Mountain in Arkansas profited from the mining boom, which lasted from 1911 to 1918.

The original discovery of zinc on Rush Mountain occurred in 1880. Morning Star Mine, which would become the largest mining operation in the district, was founded in 1885. Ten different mining companies operated fourteen mines in the area. An excess supply of zinc in the postwar period resulted in a dramatic drop in prices that forced many of the mines to close.

Rush Historic District cultural landscape, located in the Arkansas Ozarks, has a period of significance of 1885 to 1931. The start and end date of the period of significance corresponds to the founding and closing of Morning Star Mine. In addition to the mines, the district includes residences, a blacksmith shop, and general store associated with mining community life.

Although deterioration of the structures and the overgrowth of vegetation somewhat diminish the integrity, the district remains able to convey its historical significance. Rush Historic District demonstrates historical significance for its association with the evolution of the zinc mining industry, its vernacular architecture, and the potential to yield future archeological information related to mining.

Buffalo National River encompasses Rush Historic District in Boone County, which includes 1,316 acres located in the park’s eastern half. The valleys of the Buffalo River and its tributaries, Rush and Clabber Creek, define the topographical patterns at Rush Historic District. Steep hillsides and rock outcroppings are prevalent throughout the site, along with oak and hickory forests. The seclusion of Rush Historic District and absence of modern development contribute to both the feeling and setting for the abandoned mining community.

Extant built features include the Taylor-Medley General Store, Rush Blacksmith Shop, and Rush Smelter along with several mines, tunnels, and houses. The commercial underground mines, including both horizontal and vertical mining systems, are visible from the surface and fenced off or otherwise closed.

The majority of the residences in House Row were constructed around 1899 and are wooden, simple, and one-story. Metal roof sheathing, open front porches, and pier foundations consistently appear in their designs. The extant houses face decay and exist among ruins and archeological sites. The ruins include that of the Morning Star Hotel and Mill and the site of the Hicks Hotel and Hicks General Store.

Human presence at Buffalo River Valley extends as far back as the Dalton period from 10500 to 9500 BCE. During this time, early people established temporary settlements along Rush Creek. Around 800 CE, Native American tribes started permanent settlements and grew squash and maize along the river. Several Native American tribes, including the Shawnee, Delaware, and Cherokee, occupied the area into the early 1800s. The Cherokee established farms along the Buffalo River and continued to embark on seasonal hunting trips upland. This use continued until the Treaty of Washington in 1828 when the federal government pressured the Western Cherokee living in Arkansas to cede their land.

French prospectors from Louisiana explored the area in the early 1800s. Euro-American settlers arrived slowly during this period due to limited infrastructure in the area. The discovery of zinc on Rush Mountain and subsequent opening of Morning Star Mine in 1885 motivated the creation of new mines, a smelter, and new industries. Rush Smelter was built in 1886 to separate silver from zinc ore, however, a lack of silver quickly made its operation redundant.
The town soon expanded to include offices, hotels, barns, stores, a courthouse and a post office. Mills were also built as mining operations grew to deplete the purest zinc deposits. Concentrating mills, such as Morning Star Mill, separated valuable minerals from waste. The mills received ore by elevated tramways that started at the mines. At Rush Historic District, room-and-pillar mining proved a popular method and involved horizontal excavation of minerals. The waste rock piles this method produced still exist in the cultural landscape and are easily mistaken for natural hills. 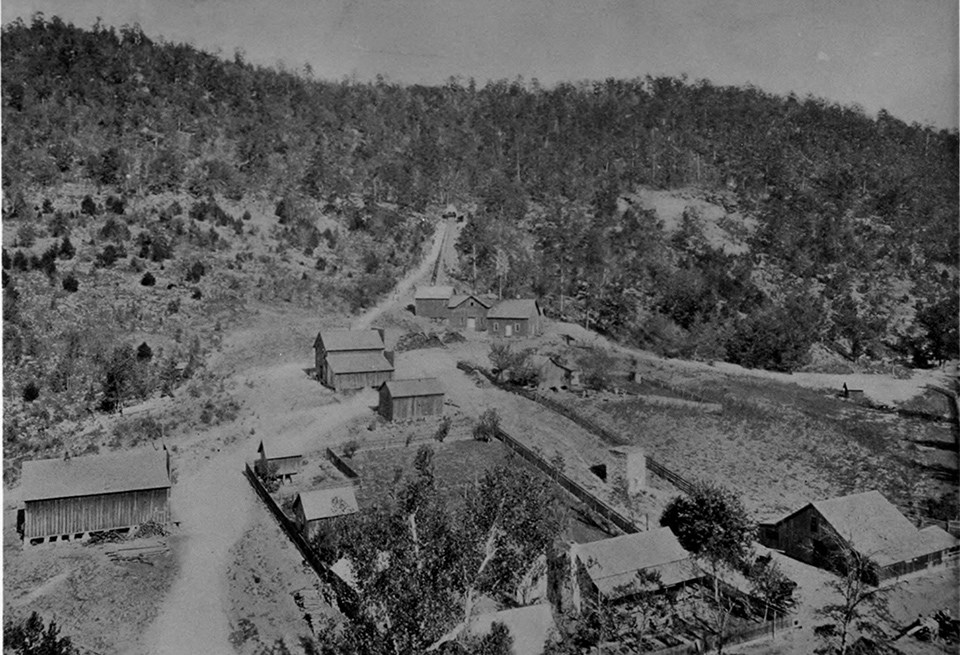 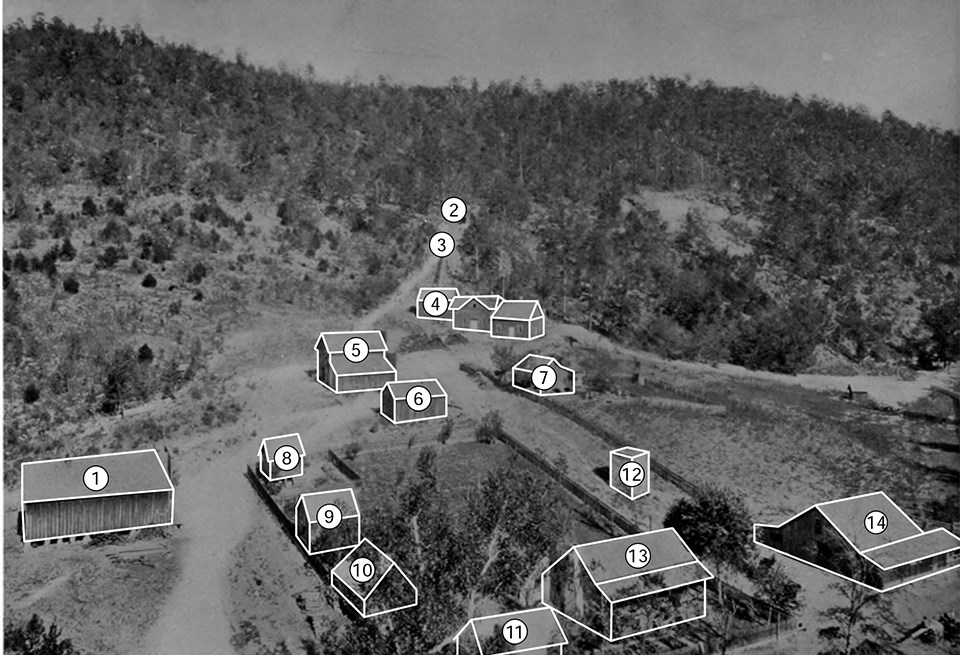 Right image
Mines were set high on hillsides. Mills were located directly below. Mining communities with support structures such as hotels, stores, and residential buildings were clustered on the valley floor.
Credit: (NPS / Buffalo National River Archives, annotation in 2017 CLR)

Note the lack of vegetation on hillside, waste rock pile in upper left, and the yard and open pasture around the Morning Star Hotel and Livery Barn.
Mining booms continued to draw settlers and at its peak the population of the historic district ranged from 2,000 to 3,000 residents. Mining and milling activities ceased briefly at the beginning of the 20th century due to a price decrease in zinc ore and high cost of shipping. However, between 1911 and 1918, zinc sales rose dramatically in response to demand created by World War I. Advertisements announced the possibility of easy fortunes at Rush and the labor force in the town grew.
In 1919, the boom ended and production of zinc dropped. The town’s population in 1920 included only 344 residents and by 1931, the last Morning Star Mine closed. The remaining residents attempted to reinvigorate the local economy by advertising “Rush Ghost Town” and constructing a campgrounds and cabins.

In 1972, Congress established Buffalo National River, which included what is now known as the Rush Historic District. The National Park Service completed Rush Road improvements, stabilized structures, and built fences at the mines and tunnels in the 1980s. In 1987, Rush Historic District was listed in the National Register of Historic Places. Flooding and arson have destroyed or harmed several of the structures over the years. However, the remaining structures adequately convey the site’s identity as an abandoned mining community. The public can visit the cultural landscape to learn about historic zinc mining and mining community life. Steep gradients and a lack of walkways may make some areas of the landscape challenging to traverse.