Often when we talk about Skagway history, stories tend to center on the Klondike Gold Rush. Skagway’s police patch shows a gold miner panning over a river, and if you walk through any given parking lot in Alaska you will probably be able to spot a line of stampeders climbing to the Chilkoot summit on Alaska license plates. In the 119 years that have passed since 1898, these images have become iconic and the legacy of the gold rush has adopted a life of its own. Here we will take a quick look at how the legacy of the Klondike Gold Rush developed through tourism in Skagway. Summer tourism, a market that blossomed after the gold rush continues to support the Skagway economy. The seasonal nature of Skagway’s economic ebb and flow is quite apparent to anyone who lives here; in 2015 unemployment rates fluctuated from 21.7% in January to 4.5% in July, and Broadway soon becomes quiet after the last ship day in September. The gold rush is integral to many of Skagway’s tourist offerings, even the event itself attracted tourists as early as 1898.

Today, buildings in Skagway’s historic district represent a commitment to maintain historical architecture on Broadway and Spring Streets. But immediately after the gold rush, Skagway residents directed their efforts towards the opposite goal. In the aftermath of the rush, Skagway was peppered with hastily built cabins left by fortune seekers. These constructions were considered an eyesore and community-based initiatives effectively dismantled the vacant shacks. As early as 1899 the Chamber of Commerce scheduled a “Skagway Clean-up Day,” a community-wide event to clean yards and streets for the upcoming tourist season. Similarly, businesses turned away from the rough and ready false fronts that served in the sudden flurry of the Klondike. Instead builders added double recessed doors and ornamental designs on commercial structures. The White Pass and Yukon Route Railroad Depot, on 2nd avenue is a nice example of this new generation of sophisticated tastes. Completed in 1900, the building features a Greek revival façade, display windows, embossed tinwork and recessed doors.
Skagway’s buildings not only started to look different, but they also started to move. During the gold rush, Skagway’s business district was centered off Broadway on 4th, 5th and 6th Avenues, but with the completion of the railroad, businesses relocated. In fact, many of the buildings on Broadway today were moved from somewhere else, some familiar examples are the Red Onion Saloon, the Golden North Hotel, the Pack Train Saloon and the Eagles’ Hall. As a result, present-day Broadway closely resembles Broadway from 1915.

From Stampeders to Cruise Ships

Buildings were not the only new features of post-gold rush Skagway, in the years leading to WWI, the threat of conflict dissuaded visitors from taking a fashionable “European Tour” and attention shifted to vacation spots in other parts of the world. Skagway saw an increase in cruise ships sailing the Lynn Canal, and business started to cater to this new audience. Laura Berton, mother of Pierre Berton, first came through Skagway in 1907 en route to teach kindergarten in Dawson City. When she came back through Skagway in the 1930s she noted:

Skagway had ceased to be the drab little town I had seen on my first trip north. Now it was a village dedicated entirely to preserving the memory of the town’s leading moneymaker, the late Jefferson R. Smith, better known as “Soapy.” In his lifetime, Soapy Smith, a confidence man from Denver, had gouged the Skagway visitors mercilessly…Now the citizens of Skagway were gouging the visitors in his name. Smith had operated a bar in which his luckless victims were fleeced. Now there was a bar containing life-sized dummies of Smith, where the tourists were fleeced at fifty cents admission each. There was also Soapy Smith’s grave, well protected by wire mesh from the souvenir hunters, and Soapy Smith’s regularly freshened blood stain on the wharf, to mark the spot where he had been shot to death by a vigilante named Frank Reid…There were postcards for sale showing Soapy Smith on a white horse and other postcards showing him dying on a white cot. There was a giant painting of his skull on the cliffs above the town, grinning down at the passers-by, so that it was impossible not to be aware of this desperado for a single moment of one’s stay in Skagway. He was, indeed, Skagway’s leading industry. Nay, he was her only one. 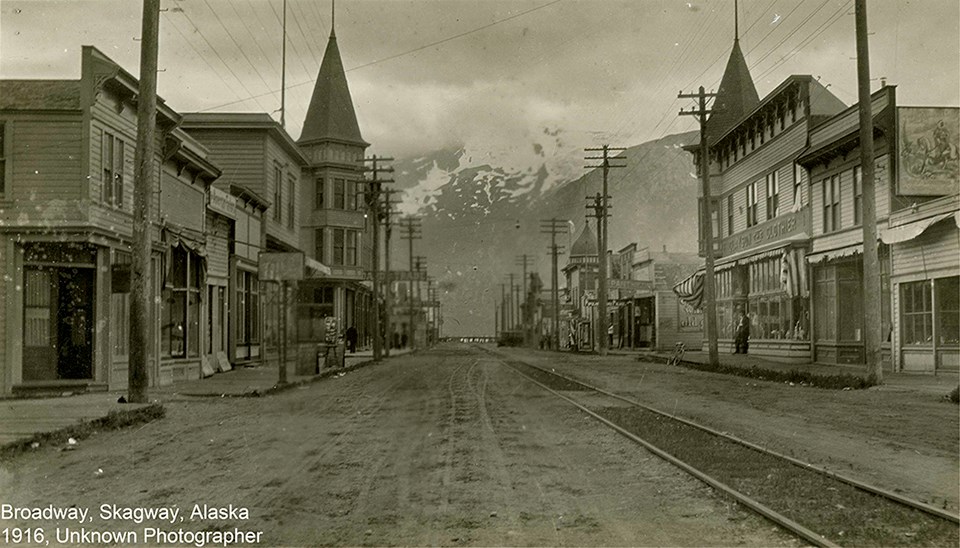 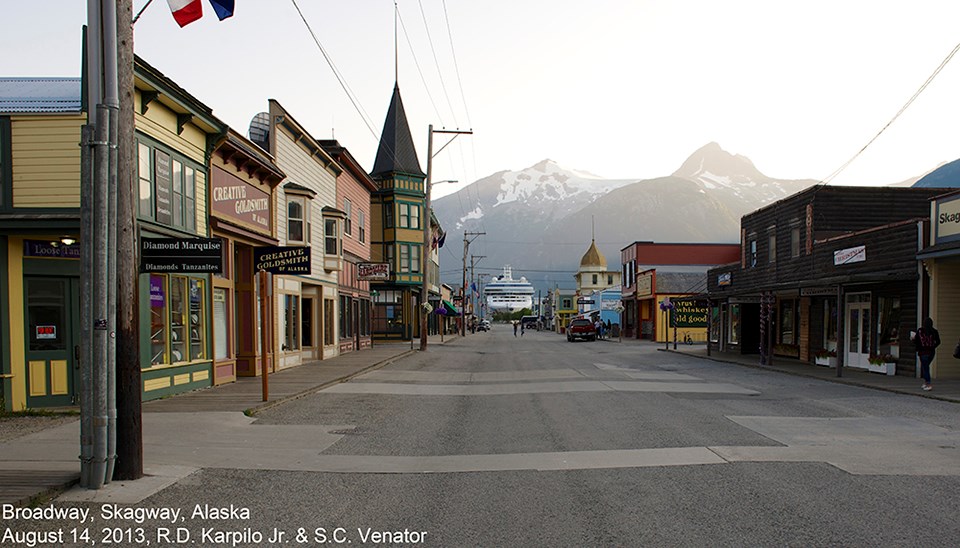 Laura Berton touched on one of many gold rush legends that lives on in Skagway, that of the infamous Soapy Smith. Jeff Smiths Parlor, “where the tourists were fleeced at fifty cents admission each,” was the brainchild of a one Martin Itjen, a tourism promoter who was known for his streetcar tours in the 1920s and 1930s. Itjen “the little man with a big wit,” would greet visitors on the dock with his streetcar, taking tourists to see “all points of interest” in town. For two hours, Martin Itjen would entertain with “intentionally bad poetry” describing his own experiences as a fortune-seeker in 1898 and some of the notorious characters from the time. As the tour came to 6th avenue, part of the former business center of Gold Rush Era Skagway, Itjen declared:
In those days, things were booming; the bright lights were aglow,
The city found the gambler and the girls up on the row.
I dug up my monthly fine the same as all the rest.
Nothing was too good for me; I always bought the best…

When the roughneck came to town and brought along his poke,
A few turns at the roulette wheel would send him back home broke.
He got something for his money when he went and bought a dance,
But when he played the roulette wheel, he never had a chance.

You really can’t imagine how good it made me feel,
To win the sucker’s money, then listen to him squeal.
Conditions now are different; things then were not the same,
For the milk of human kindness did not figure in the game.

So I had to change my system; I earn an honest living now.
I drive the Skagway Streetcar for my daily chow.
Every dog must have his day, as everybody knows,
So I cut out the porterhouse and put on working clothes.

Soapy Smith and many more have long since gone to rest,
But I, through honest dealings, with many friends am blessed.
I’m an authorized Ford dealer, an undertaker, with all kinds of supplies,
And hope to be a doctor before many years go by.
Itjen never did become a doctor, but he certainly operated on many machines. Both Itjen and George Rapuzzi, his protégé, were mechanically gifted. On the back of his street car, Itjen attached a mannequin of Soapy Smith that puffed a cigar using the smoke from the exhaust system.George Rapuzzi, born and raised in Skagway, demonstrated mechanical aptitude from a young age. When a patron at his mother’s store on Broadway made a habit of spitting tobacco on the floor, young George engineered a lever with two tacks that would impale the customer’s bottom at the press of a button. This skill later translated to Jeff Smith’s Parlor, where a mannequin of Soapy Smith would turn and greet visitors when each time the front door opened. Jeff Smiths Parlor closed in 1976, but present-day visitors are able to visit the quirky museum. The Park Service has recently restored the building on 2nd Ave. to the 1960s era, complete with mannequins of Soapy Smith, “Dangerous Dan McGrew” and “Lady that’s known as Lou.”

Since the gold rush days of 1897, Skagway has transformed into a town that welcomes thousands of ship passengers each summer. Over the course of over a century, community members have shaped Skagway’s folklore and appearance to introduce newcomers to the area. When winter arrives and Broadway is quiet, you might be able to take a closer look at the buildings on the street and imagine the many layers of Skagway’s history, “intentionally bad poems” not included. 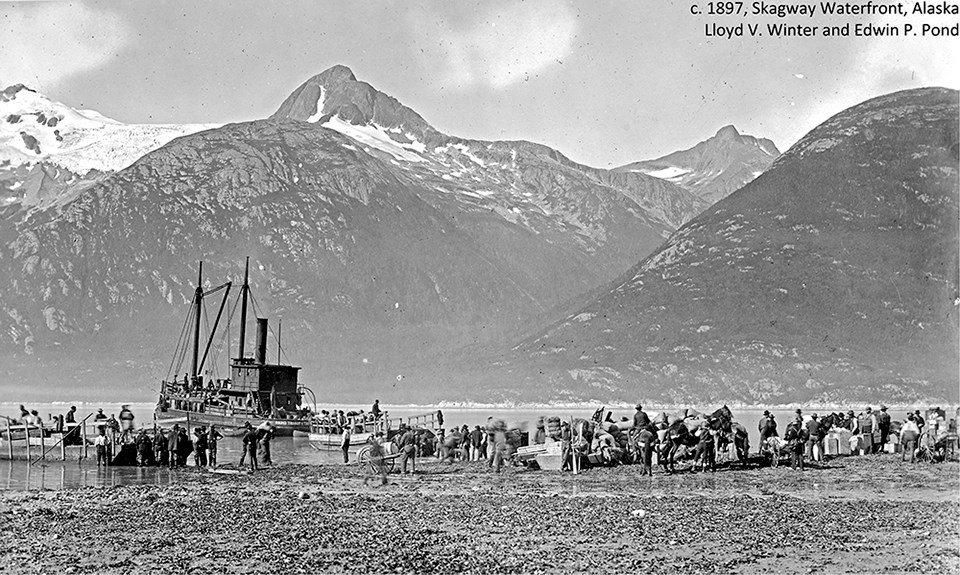 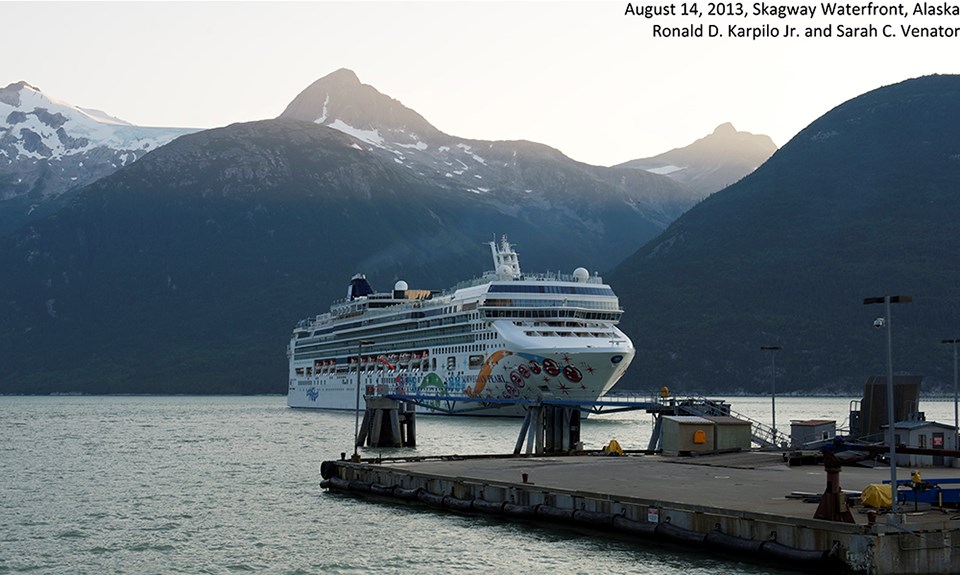 
This article was researched and written by Susannah Dowds, the Assistant Historian at Klondike Gold Rush National Historical Park in November 2015. It was originally given as a radio talk. Information was supplied by the following sources: