Only one scientific study about the effect of temperature on these iconic rock spires has ever been done. Without knowing more, the effect of a warming climate is anyone’s guess.

When we talk about climate change “reshaping” our world, we often mean it’s reshaping our attitudes, actions, and politics. But at Bryce Canyon National Park in Utah, the effects of climate change may be literally reshaping the physical park. Warmer temperatures resulting from climate change could pose a grave threat to the park’s iconic natural rock structures, the hoodoos, whose creation apparently rely on cycles of freezing and thawing water. But definitive science behind how hoodoos are created, much less how warming temperatures will affect them, is maddeningly absent. And without the science, we cannot hope to address or adapt to climate change’s impacts on them.

Roughly fifty million years ago, the park was a swampy, freshwater lake more than 200 miles long but shallow in depth. Over the course of 25 million years, sediments washed into the low-lying lake from surrounding mountain streams and gradually built up in layers. These layers formed the fragile Claron limestone, the material that makes up the park’s beloved hoodoos, which rise up from the landscape in columns, towers, and bridges. Bryce Canyon National Park has the greatest concentration of hoodoos found anywhere on Earth.

Hoodoo formation is also affected by elevation. Bryce Canyon ranges from 6,600 to 9,100 feet. Its high elevation means the landscape goes through dramatic temperature fluctuations. Annually, the park has about 170 days where temperatures are both above and below freezing in the same day. This freeze-thaw cycle is believed to be the leading cause of hoodoo creation at Bryce Canyon. The freeze-thaw, physical weathering by ice, which breaks the rocks apart, may be what gives the hoodoos their iconic, angular shapes, with fantastical names like “Thor's Hammer,” “Queen Victoria,” and “The Alligator.”

An Influential Idea from One Single Source

When I heard about climate change and water reshaping the park, I wanted to know how fewer freeze-thaw days would affect hoodoo formation. But when I consulted the park’s physical scientist, Tyra Olstad, I discovered there’s no clear answer to this question. As it turns out, every book, research paper, and article that’s been written about the hoodoos cite a single, unpublished dissertation as the source of the hypothesis that freeze-thaw cycles shape the hoodoos.

Every book, research paper, and article that’s been written about the hoodoos cite a single, unpublished dissertation as the source of the hypothesis that freeze-thaw cycles shape the hoodoos.

I started working at Bryce Canyon in 2021. I have cited this freeze-thaw hoodoo erosion hypothesis in park programs, in answering visitor’s questions, and in creating resources for future rangers, because everything refers to it. But it was only a hypothesis in one person’s thesis. It’s status as the single cited source shows how little we know about how hoodoos are created. And if we don’t know how they’re created, how can we protect them or prepare ourselves for what’s to come?

A Treasure without a Champion

Much of the research that scientists have conducted at Bryce Canyon is not about hoodoo formation. “Paul Jewell of the University of Utah and Juan Fernandez of the University of Florida [took] a few LIDAR scans in 2009,” Olstad said. “But as far as I know, they didn't really tell the park anything new. They didn't submit a report, just presentation slides summarizing their work. They didn't look beyond the amphitheater to note that the Claron Formation is exposed elsewhere without forming hoodoos.”

National Park Service geologist Eric Bilderback scanned the hoodoos with lasers in May 2018 . When I asked him about his project results, he told me, "The 2018 ground-based survey had two objectives: it was a proof-of-concepts with a laser scanning total station…and a baseline LIDAR survey to use for future change detection. Because there was no high resolution data set to compare the LIDAR survey with in 2018, we didn't do geologic analysis on that topographic data collection.” University of Utah geologist Jeffrey Moore looked at the structural integrity of natural arches and did some geohazard analysis in 2015. Tomsen Reed of Utah State University conducted a rockfall hazard analysis of a portion of roadway through the park in 2020.

"None of these people were researching the causes and processes of hoodoo weathering and erosion."

“None of these people were researching the causes and processes of hoodoo weathering and erosion,” said Olstad. “Lindquist is still the only person I know of who's done a scientifically thorough study of what causes hoodoos here. The whole point is that there are zero peer-reviewed, published research papers into the freeze-thaw hypothesis. The problem is, we don't officially know anything about hoodoo erosion. As far as I can tell, Lindquist's dissertation is the original and only research that posited and perhaps justified the freeze-thaw hypothesis. Everything else seems to cite that dissertation.”

But she added, “We do know the weather data.” 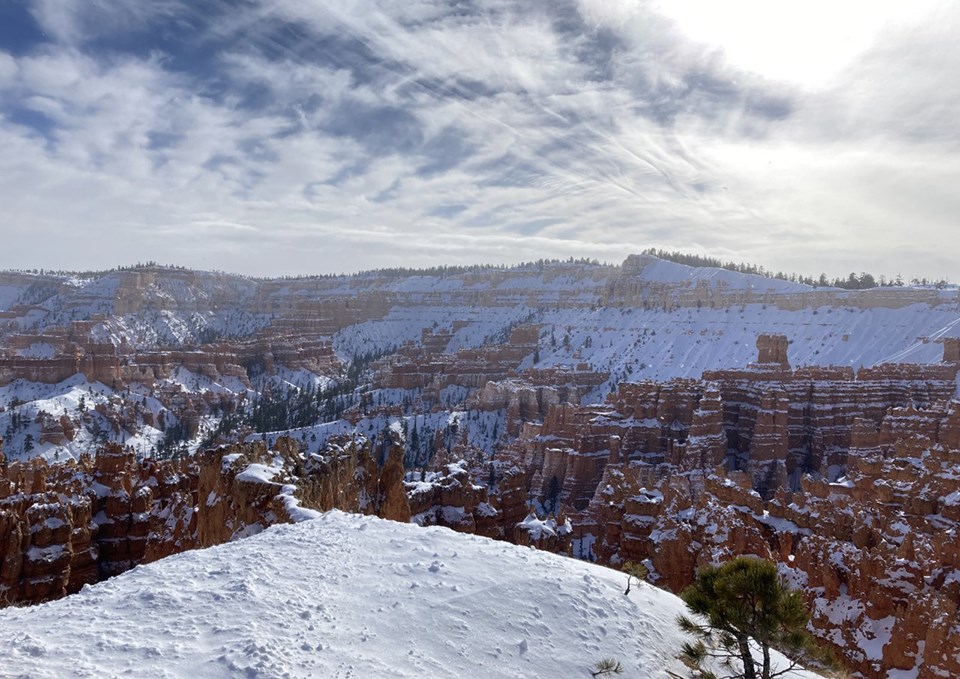 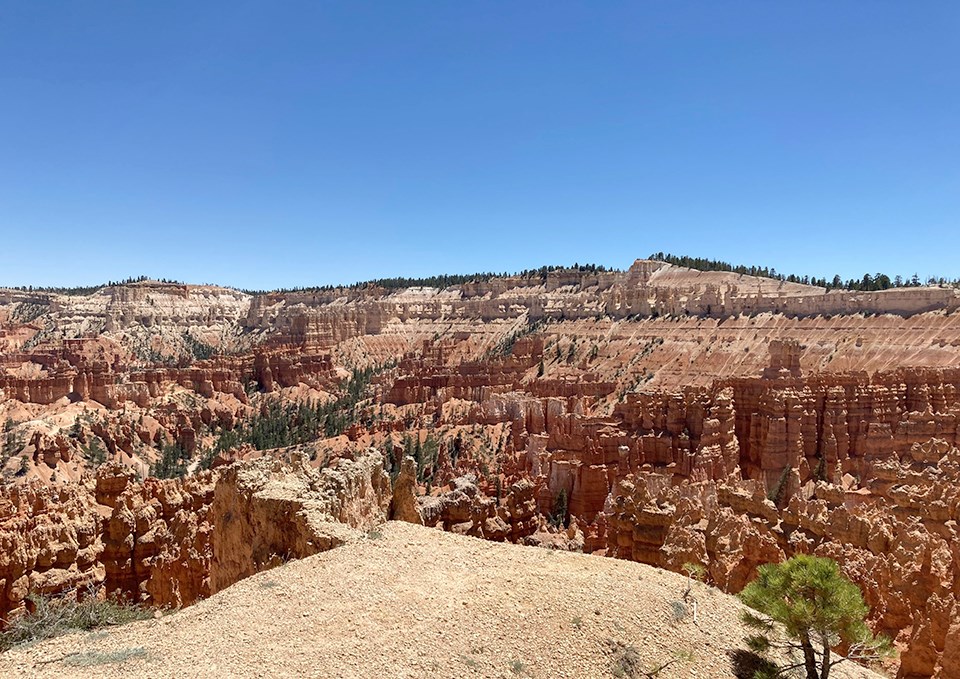 Lindquist theorized that the freeze-thaw cycle is most responsible for hoodoo formation. But without other scientific studies to back up this idea, we don't know how correct he was. Here is an interactive comparison of Bryce Canyon viewed from Sunset Point in December 2021 and June 2022. Slide the arrows to the left or right to compare.

Meteorologists and other scientists have documented the weather in national parks since the beginning of the 20th century. A study published in 2014 by Bill Monahan and Nicholas Fisichelli showed that temperatures in national parks in the past 20 years have already shifted beyond the historical range of variability. We’ve monitored temperatures at Bryce Canyon since the 1960s. Back then, we had 220 freeze-thaw days annually compared to 170 days in 2020. That’s a loss of 50 days in 60 years. The average high temperature has increased about a half degree Fahrenheit, but the average low temperature has increased by seven degrees. It’s mostly the low temperatures that are disappearing. The fewer freeze-thaw days we experience, the fewer new hoodoos are presumably being created.

Warming temperatures may reduce the hoodoos to unimpressive mounds of rock rather than the geological oddities that people marvel at today. But then again, they may not. We just don’t know.

Although we need more research on whether or not the freeze-thaw process is the primary source of hoodoo erosion, it’s evident that the climate in the park is changing greatly. It’s possible that warming temperatures may reduce the hoodoos to unimpressive mounds of rock rather than the geological oddities that people marvel at today. But then again, they may not. We just don’t know what’s going to happen. “It's a delicate pitch to point out that here we are, with this iconic landscape, but we don't entirely understand how it works and worry that the processes that create it are changing dramatically,” Olstad said. “But it's also a really important message, and something I don't think many people realize or want to admit.”

Claire Crise is a seasonal ranger at Bryce Canyon National Park. She has worked with the NPS since 2018.
Image credit: NPS / Rhodes Smartt