Let Harriet Tubman Guide You on the Journey of a Lifetime

After liberating herself, Tubman returned to Maryland 13 times to rescue friends and family from slavery. In her lifetime she travelled up and down the east coast of the United States, during which she raised money to assist freedom seekers, served as a nurse and scout during the American Civil War, fought for universal suffrage – the list goes on and on. Travel with Tubman invites you to explore places across the country that highlight Harriet Tubman’s importance in American history.

Travel with Tubman is unique. Rather than focusing on ways to plan your visit inside one national park, the tour outlines locations connected to the National Underground Railroad Network to Freedom Program, National Parks, and their partners across the east coast of the United States.

For the best user experience, users should download the National Park Service App. After downloading, search for one of the following parks to navigate to the tour:

To explore the Travel with Tubman guide on a desktop, users can use the map below.

“I was the conductor of the Underground Railroad for eight years, and I can say what most conductors can't say — I never ran my train off the track and I never lost a passenger.” - Harriet Tubman at a suffrage convention, New York, 1896

Users can also download and print “The Conductor,” or create their own guide to lead them on a once in a lifetime road trip. However you choose to recreate, share your photos from Harriet Tubman related sites and show us how you #TravelWithTubman. 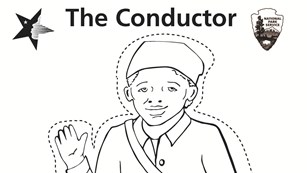 Print and color in The Conductor before your trip and let Harriet Tubman guide you in the journey of a lifetime. 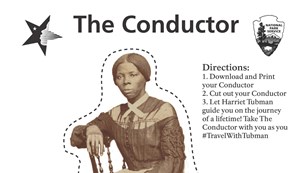 If coloring is not your thing, print and cut out this photograph of Harriet Tubman and let her guide you on the journey of a lifetime. 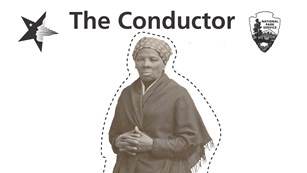 A second, non-coloring option to print and bring with you as you Travel with Tubman

The National Park Service's new official app maintains up-to-date information about more than 400 national parks nationwide. Created by park rangers with visitors in mind, the app connects visitors to interactive maps, tours of park places, on-the-ground accessibility information, and much more to plan your national park adventures before and during your trip. The free app is currently available for iOS and Android devices.

Travel with Tubman is a vision become reality. Rooted in partnerships, the NPS is grateful to the work and support of countless individuals, partners, and organizations, including: