Lake Clark National Park and Preserve’s coast reveals a powerful and dynamic geologic environment molded and carved by volcanoes, earthquakes, coastal uplift, and glaciation. This area is dominated by two stratovolcanoes, Redoubt and Iliamna, the tallest peaks in the park. Other significant features include a major fault known as the Bruin Bay fault that bisects Chinitna and Tuxedni Bays, and layers of sedimentary and metamorphic rock of the Mesozoic Era spanning roughly 200 million years.

The region from Chinitna Bay to Tuxedni Bay has bedrock formed in the Jurassic age (200—145 Ma) of the Mesozoic Era. The rocks in this region are divided into four geologic units based primarily on age and rock type: the Talkeetna Formation, Tuxedni Group, Chinitna Formation, and Naknek Formation. Together, these rocks are one of the most complete and thickest successions of Jurassic bedded rock in the United States. The geologic units are a product of the ancient Talkeetna arc, an oceanic volcanic arc that formed in the proto-Pacific ocean during the Late Triassic and Jurassic (212.87—164.1 Ma)

The Bruin Bay fault runs parallel to Cook Inlet, just south of Iliamna and Redoubt volcanoes. This fault is a major structural feature in the area. It separates the older volcanic and plutonic rocks of the Early Jurassic in the northwest from the younger bedded sedimentary rocks of the Middle-Late Jurassic in the southeast. It is thought to be responsible for facilitating the exposure of the Talkeetna Arc and the subsequent accumulation of sedimentary rocks in the Cook Inlet forearc basin.

The geology of the Lake Clark coast is the literal bedrock for this area's unique ecology. Vast coastal salt marshes that exist between volcanic heights and ocean depths support a high concentration of brown bears at locations like Chinitna Bay and Silver Salmon Creek.

During the Middle and Late Jurassic, movement along the Bruin Bay fault caused sections the Talkeetna arc to be uplifted, and igneous rocks that were once buried became unearthed and susceptible to erosion. Sediment eroded from the arc was deposited in the adjacent Cook Inlet forearc basin creating the sedimentary rocks of the Tuxedni Group, Chinitna Formation, and Naknek Formation.

The Tuxedni Group of the Middle Jurassic is adjacent to and overlies the Talkeetna Formation. It consists of fossiliferous sedimentary marine rocks composed of volcanic and plutonic rock fragments. Marine invertebrate fossils such as bivalves, ammonites, and belemnites can been seen within this group.

The Chinitna Formation is a sedimentary marine unit of the Late Jurassic that overlies the Tuxedni Group. It consists of coarse to fine grained sedimentary deposits. The presence of marine invertebrate fossils such as ammonites are found throughout the unit.

The Naknek Formation consists of marine sedimentary rock of the Late Jurassic. It overlies the Chinitna Formation, and reflects a time of renewed mountain building, continued movement along the Bruin Bay fault, and the exposure of plutonic rocks from the Talkeetna arc. Marine invertebrate fossils are found within the Naknek Formation, but in lesser abundance than in the underlying Chinitna and Tuxedni units.

Leave What You Find

We ask you to resist the temptation to take fossils home. Removing fossils from the park and preserve is illegal. Although Lake Clark seems remote, in fact many people visit the area. If visitors take fossils and other artifacts, eventually there will be no more left and our national heritage will be impoverished.

The Alaska-Aleutian subduction zone is the convergent boundary where the Pacific and North American plates collide causing significant seismic and volcanic activity. Within this zone, the denser Pacific plate (mostly oceanic crust) is being thrust underneath the more buoyant North American plate (mostly continental crust) at a rate of 2 to 3 inches per year. On the western edge of Cook Inlet the Pacific plate reaches depths as much as 60 miles beneath the Chigmit Mountains. As the edge of the Pacific plate subducts to this depth, the oceanic crust reaches the mantle and undergoes intense heat and pressure causing the crust to release fluids. Magma produced by this process rises towards the surface and erupts to create the modern Aleutian arc. Redoubt and Iliamna volcanoes, as well as 50 other historically active volcanoes, sit along the Aleutian arc and make up the northern portion of the “Ring of Fire.”

Iliamna and Redoubt volcanoes are two stratovolcanoes located within the park. These volcanoes are built by eruptions of lava flows, tephra falls, and pyroclastic flows. As volcanic eruptions occur, the eruptive material accumulates in overlapping and alternating layers creating the iconic steep-sided profiles associated with stratovolcanoes.

Fumaroles on the upper east side of the Iliamna edifice are active and regularly emit steam and gas. The edifice of Iliamna has been significantly hydrothermally altered by a heat source (fumaroles) and a water source (perennial ice and snow). This hydrothermal alteration results when circulating hydrothermal waters interact with the edifice rocks altering their original compositions by replacing preexisting minerals with new mineral assemblages including clays. Clay minerals tend to hold water, fail easier, and contribute to flank instability. This results in the common debris avalanches and debris flows that radiate off the volcano.

Redoubt has had four historical eruptions (1902, 1966, 1989-90, and 2009) and according to lake core records from Bear Lake (22km SE of the volcano) has had more than 100 eruptions in the last 10,000 years. The most recent eruption was in 2009 and resulted in 19 major ash producing explosions and the formation of a lava dome that is the site of active steaming today.

Features and deposits formed by glacial advances and recession have helped shape the region into the landscape we know today.
Many glaciers within the park were created in the late Wisconsin (75—11.5 kya) and over time, added deposits and carved valleys. Though these glacial deposits have played a role in the coast’s topography, evidence of their markers have been removed or buried by active volcanism, tidal erosion, and landslides.

During the Last Glacial Maximum in Southwest Alaska (22—20 kya), nearly all of the Cook Inlet basin was filled with glacial ice. U-shaped valleys that branch out from snowfields on Iliamna Volcano indicate the glaciers from the area reached sea level at one time.

Along the coast, glacial deposits found their way into the lowlands and formed sections of the shoreline north of East Glacier Creek to the Johnson River. 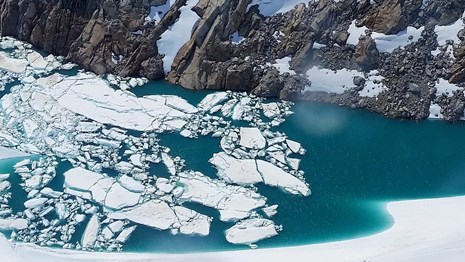 History Preserved in Ice and Snow

Learn about ice patch archeology and the cultural context of archeological sites.

Active tectonic and volcanic processes are and will continue to change the landscape of Lake Clark National Park and Preserve. The areas on the east and west side of Cook Inlet are shifting both vertically and horizontally due to seismic activity and crustal deformation (strain) caused by afterslip and viscoelastic relaxation.

Between the 1960s and 1990s, postseismic uplift on the Kenai Peninsula and in the Kodiak region range between 50 cm and 100 cm, with most of the uplift happening before 1970. The east side of the Kenai Peninsula has seen the largest change due to it being closer to the 1964 earthquake epicenter.

In response to the 1964 earthquake the Earth’s mantle is flowing towards the Aleutian trench and slightly upward. This shift is due to viscoelastic relaxation, a process similar to a guitar string slowly losing its tune over time. As the accumulated stress from the earthquake decreases, the Earth’s surface relaxes. Trenchward motion in Cook Inlet is currently
averaging about 15mm/yr.

The coast is also impacted by isostatic rebound, a reactionary process where land masses rise when the weight of huge ice sheets is removed. When glaciers that bounded the Earth’s surface retreat, the surface begins to slowly rebound in response to the diminished ice load. It will rise respectively until it relaxes back to its original state. This is a process that resembles the action of carpet slowly reforming after a piece of furniture has been removed from the location. The rebound is caused by a combination of ice loss in the last 100-200 years as well as continued present-day ice loss. On the Kenai Peninsula, between 1965-2000, a range of 10cm to 25cm of uplift was seen in response to this process.

The physiographic features within Lake Clark National Park and Preserve illustrate a geologic setting established 200 million years ago converging with a young, active, and ever-changing landscape. Modern processes along the coast include uplift, volcanic activity, glaciation, coastal erosion and river deposition. These factors are still shaping the region. Stay tuned, as the shifting continues.

Glossary
Afterslip: A seismic slip that occurs along a fault ruptured by a large earthquake in the months following the event. A non-violent movement of the ground following an earthquake.
Arc System: Product of subduction.
Forearc Basin: Depositional area found in subduction zones between a volcanic arc and an oceanic trench.
Fumarole: An opening in or near a volcano, through which hot sulfurous gases emerge.
Lahars: A landslide of wet volcanic debris on the side of a volcano. The deposit left by such a landslide.
Plutonic Rocks: An igneous rock (such as granite) composed of relatively large crystals that is regarded as having solidified at considerable depth below the surface.
Pyroclastic Flows: A dense, destructive mass of very hot ash, lava fragments, and gases ejected explosively from a volcano and typically flowing downslope at great speed.
Subduction Zone: The process by which collision of the earth’s crustal plates results in one plate’s being drawn down or overridden by another, localized along the juncture of two plates.
Tephra: Clastic volcanic material ejected during an eruption; can form pyroclastic flows, lahar, or be entrained in the eruption cloud and fallout as ash 100s of miles from the volcano.
Viscoelastic: Having both fluid and elastic properties at the same time.