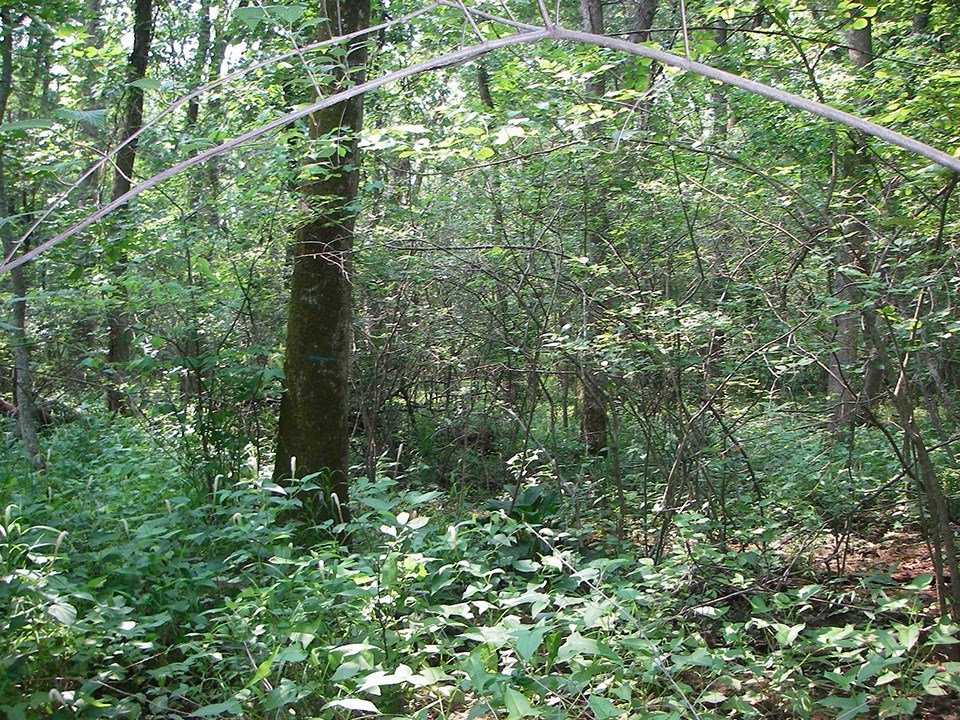 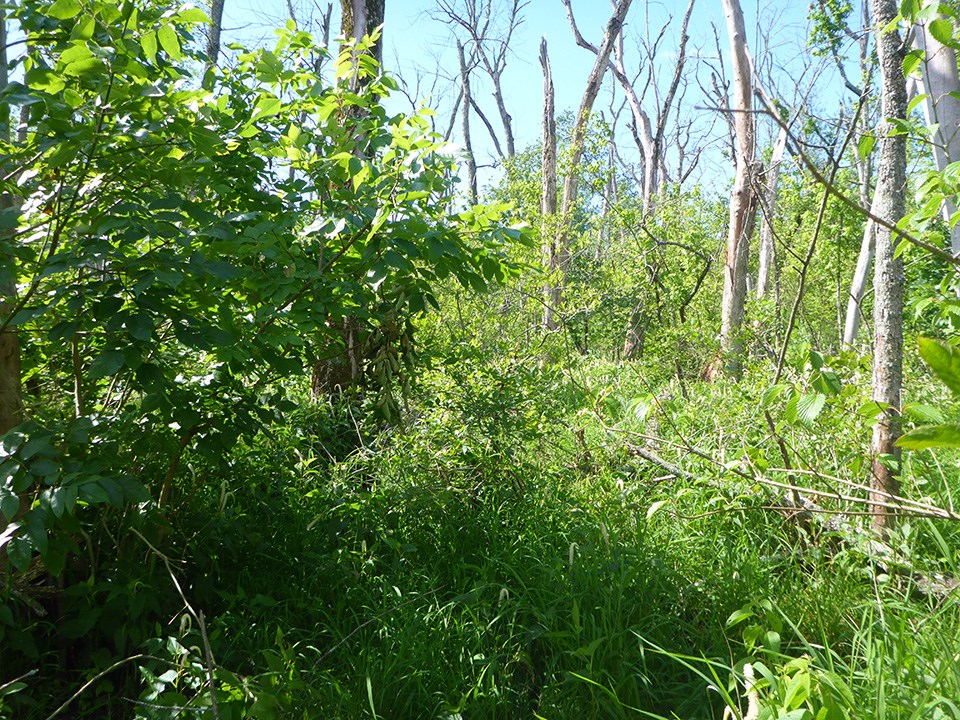 Before and after emerald ash borer impacts in an ash-dominated swamp in Piscataway Park in 2007 (on left) and in 2019 (on right), showing loss of canopy cover and increased light as well as green and pumpkin ash stump resprouting.

Emerald ash borer, or EAB (Agrilus planipennis) is an invasive beetle that targets ash tree species. Evidence of EAB activity has been present in National Capital Region (NCR) parks since at least 2014. In areas of the US where the beetle has been present since the early 2000s, EAB was fatal to nearly 100% of ash trees. In NCR, results are similar, with the exception of ash-dominated swamps (regularly flooded forest wetlands).

Continued Decline of Ash Trees in 2021

Now, more than ten years into the EAB invasion of NCR forests, ash tree density continues to decline (Figure 1). According to forest data collected by the National Capital Region Inventory and Monitoring Program (NCRN I&M), over 300,000 ash trees lived in NCR’s national park forests before EAB’s arrival. The initial spread of the beetle made for dramatic displays of ash mortality, and monitoring data from 2017-2021 indicate there are fewer than 80,000 surviving ash trees (Table 1).

Those that died continue to swell the number of standing dead trees (snags), which may be nearing their peak (Figure 1). In the next few years, these snags will decline (both literally and numerically) as they fall to the forest floor.

Dry and upland forests in NCR show similar responses to EAB as other infested areas of the country, with mostly white ash trees quickly dying and seedlings proliferating. However, something different is happening in the ash-dominated swamps along the Potomac River. (Swamps are forested wetlands that flood regularly.)

These swamps are part of the vital system that filters water flowing into the Chesapeake Bay. Wetland ash trees slow erosion and provide critical habitat to birds, plants, and semi-aquatic species. They also store carbon, slowing the effects of climate change, and act as a buffer zone against increasingly powerful storms. These areas are of intense importance to everyone involved in the ongoing efforts to clean up the Chesapeake Bay.

Swamps along the Potomac River (like those at Piscataway Park - pictured at top) were once dominated by pumpkin and green ash trees. These trees are “ecosystem engineers” because they modify and create wetland habitats. Ash trees can thrive where virtually no other native tree species can, withstanding twice-daily incoming tides.

When EAB hit, many feared the swamps themselves would be endangered by complete tree loss. However, some former canopy ash trees have so far survived the death of their main trunk by resprouting from living root systems and now taking a shrub-like form. Notably, pumpkin ash is the only ash species where sapling numbers increased after EAB infestation, growing from 15 saplings per hectare in 2013-2016 to 25 in 2017-2021 in these swamps. While the loss of shady canopy marks a big habitat change, there is still much to learn about these shrubby ash and their long-term fate:

We can easily observe changes in our wetlands because they already contain fewer species. Changes in drier and more diverse ecosystems are still playing out. As we continue monitoring ash in our forests, it will be interesting to see how habitats respond and change and what that means for the other plant and animal species that live alongside ashes.

To learn more about how National Park Service scientists are monitoring the health of parks in the National Capital Region, visit the NCRN I&M website.

Previous material on ash trees and emerald ash borer were published in a 2017 online article and in print-ready versions in 2017 and 2016.

Gabriel Popkin. Can a Hidden World Be Saved From an Invasive Scourge? 02/21/2022. New York Times.