A gas streetlamp flickers on the sidewalk outside of John Fitzgerald Kennedy National Historic Site. One can imagine Beals Street a century ago, when gas lights lined the streets, the road was unpaved, the London plane trees were young, and the houses were new. Beals Street remains residential, like when the Kennedys lived on the street. The history of the house at 83 Beals Street tells a history of suburban growth and family life, made all the more significant by the family who lived there. Today, the house has taken on a new life as a national historic site. 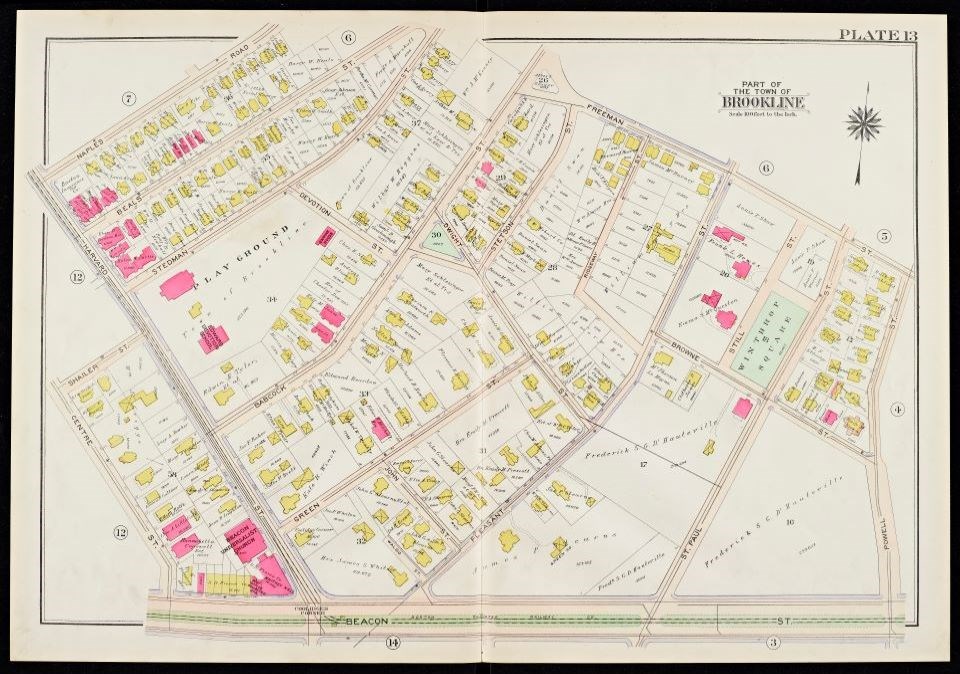 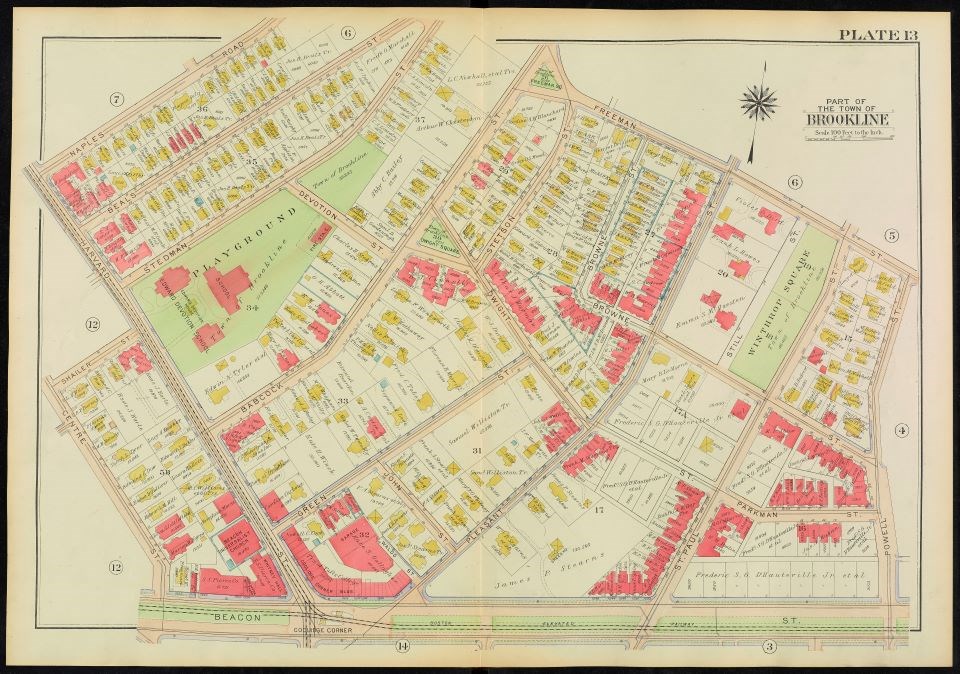 When Joseph and Rose Kennedy moved into their first home on 83 Beals Street in 1914, they were moving into a growing neighborhood. The Coolidge Corner area of Brookline rapidly expanded in the late nineteenth and early twentieth centuries. Real estate development transformed this part of the town that had been largely rural since the 1600s. The extension of the electric streetcar through Brookline provided easier access to Downtown Boston, which brought more people to the area. New shops, places of worship, and schools followed.
In 1897, the Beals family sold their lot of land in North Brookline—with pasture and pond—to a developer who divided the land into subdivisions for middle and upper class homes and apartments. Beals Street was laid out around 1900 and construction of homes began along the street.
83 Beals Street was built in 1909. The home is colonial revival in style, with a symmetrical façade and dormer windows. It was likely designed by Robert Goode, a local real estate agent who purchased the lot. It was a modern house with steam heat, indoor plumbing, gas, and electricity, luxuries far beyond many other homes in the country. Five years after its construction and after two changes in ownership, the Kennedys purchased the property.

The Kennedys lived at 83 Beals Street from 1914 to 1920. During this time they constructed the bay window in the dining room. At that time, it provided a nice view down the street since there were not yet neighboring houses in that direction. This view can be seen in the photo to the right, which depicts Joe Jr. and JFK posing outside of their house in 1920.
The Kennedys furnished their home with wedding gifts and modern furnishings, including new kitchen appliances such as an electric toaster.

The House as a Home

After the Kennedys bought a new house a few blocks away in 1920, they sold their Beals Street home to family friends Edward and Mary Moore. The Moores lived in this home for the next seven years. During this time, the Kennedy children surely spent time visiting their old house. In the following decades, two other families, the Myersons and then the Pollacks, lived at 83 Beals Street.

Once John F. Kennedy was elected president, the Town of Brookline decided to memorialize his birthplace. In 1961 they erected a marker commemorating his birth on a tablet in front of the house. The house drew curious citizens, some of whom even knocked on the door. Sometimes, owner Martha Pollack let them in and showed the bedroom where the president was born.
After Kennedy’s assassination, the town looked into purchasing the home and establishing it as a permanent memorial. Ultimately, their efforts were not succesful. Meanwhile, a group of lawyers purchased the home and offered it to the Kennedy family. The Kennedy family ended up repurchasing the home in 1966, and Rose Kennedy decided to leave a legacy by establishing the house as a historic site. She wanted the public to learn “how people lived in 1917 and thus get a better appreciation of the history of this wonderful country.”
Mrs. Kennedy aimed to restore the home to how it would have looked on May 29, 1917, the day her son John was born. To direct the process she brought in her interior decorator, Robert Luddington, Director of the Interior Decorating Department at Jordan Marsh Company. Together they rooted through storage to find old family belongings, ordered reproductions of furniture, and advertised for antiques. Though some of the home’s original fixtures were still intact, they installed reproduction wallpaper and carpeting, removed later additions, including a driveway and garage, and returned the door to the porch balcony to a window.
It was a challenging process at times. Mrs. Kennedy did not have any photographs of the interior from when she had lived there and relied solely on her memory. Today, visitors to the site may not see a perfectly accurate reproduction of the house in 1917, but they get a special perspective into how Mrs. Kennedy wanted to present her former home.

Congress passed the enabling legislation to designate the home as a national historic site in 1967. On what would have been her son’s 52nd birthday—May 29, 1969—Mrs. Kennedy officially turned the birthplace over to the National Park Service. The National Park Service (NPS) continues to run the site today and preserves and protects Mrs. Kennedy’s restorations and the furniture within it. Like any older house, the JFK birthplace requires continual upkeep and maintenance. Its structure has been stabilized with a support beam between the first and second floors to help it manage the many visitors to the site.
A major event in the site’s history took place on September 8, 1975. That night, two unidentified men threw a firebomb into the kitchen in protest of Senator Edward (Ted) Kennedy’s support of Boston school integration through busing. The site closed for a year in order to completely renovate the kitchen and clean many of the other furnishings and textiles in the house that suffered from smoke damage.
Over time, the National Park Service changed the way visitors see the site. When it opened, visitors took a self-guided tour through the home, pushing buttons to hear Rose Kennedy’s audio tour in which she describes her memories of each room. There was no visitor center in the basement as there is today. The site’s interpretive program expanded over time to offer guided tours and more programs, and continues to broaden its offerings. However, Mrs. Kennedy’s vision for the site remains and visitors gain an impression of the life of young JFK and the family influences that helped shape him into the man he became.