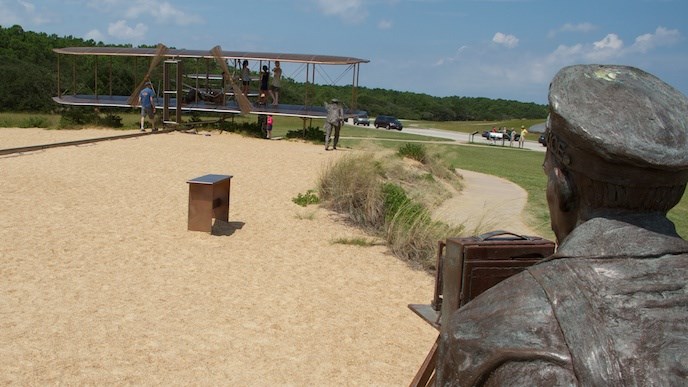 How are we changed by significant events in the present and history?

The student will be able to write a script that accurately depicts the story of the Wright brothers based on historical facts as well as the feelings of the locals in the area at the time of the First Flight.

The Wright brothers made the first successful engine-powered flight in Kitty Hawk, North Carolina on December 17, 1903. After 5 years of hard work Orville and Wilbur changed transportation and our lives forever. Their journey included many failed attempts, adjustments to their plans, and lots of determination. The day they finally achieved success they were joined by three members of the US Lifesaving Station (Willis Dough, W.C Brinkley, Adam Etheridge, and John T Daniels) and a sixteen-year-old local boy (Johnny Moore). What must it have been like to witness the first flight?  What about Orville and Wilbur? What would they say? How did it feel to finally accomplish their goal?

Review prior knowledge. This lesson should be a conclusion activity after an extensive study of the Wright brothers.  See “Who Were the Wright Brothers” lesson link below for previous lesson.  Together as a group list facts that we know about the Wright brothers’ story when they first came to Kitty Hawk. See info below for history to draw facts from…. (This info came from reading aloud books listed in additional resources section)

•  The Wright brothers studied information from the US Weather Bureau when in search of a place with steady wind to test their glider in 1900.  They also wanted a place with sand (for a soft landing) and a secluded place so that there wouldn’t be many people witnessing their trials.  After researching weather patterns they thought Kitty Hawk might be a good option because of the steady wind and sand. After writing to the US Weather Bureau they received a long letter from post master Bill Tate assuring the Wrights that Kitty Hawk was perfect place for them to conduct their experiments.

•  When they arrived in Kitty Hawk it did not look as it does today. It was mostly sand. Big Kill Devil Hill (the current hill the monument sits on) has moved 450ft from where it was then.

•  Orville arrived several days before Wilbur and began to set up camp. He brought food and supplies. When Wilbur arrived they built a tent and later a shed for the gliders and planes. The wind blew most of the time and it was windy and rainy.  There were no shops for miles.  The mosquitos were terrible. It was great place for hunting and fishing. There was wild game and they even saw bears prowling. They stayed for most of three winters.

•  December 14th 1903 they had a coin toss to see who would fly first and Wilbur won. The flyer was flown from the top of Kill Devil Hill and climbed too steeply because Wilbur oversteered and it stalled and crashed into the sand. They repaired and tried again on December 17th.

•  On December 17th  it was not nice weather but because Orville and Wilbur wanted to be home for Christmas they decided to try again. The wind blew about 27 miles per hour or harder. They signaled the men from the Life-Saving Station to come help. It was Orville’s turn this time. At 10:35 am they made their first attempt and the flyer flew for 12 seconds and went 120 feet! They made two other attempts and on the fourth with Wilbur flying the last flight of the day they flew for 59 seconds and went 852 feet!

•  John T. Daniels (one of the men from the Life-saving Station) was given the job of being the photographer that day. He had never taken a picture before but was told to squeeze the ball if anything happened. He successfully got several pictures that day.
•  After the 4th flight the flyer got caught in a wind gust and rolled over, damaging the plane.

Students will need: Rubric, Computers, and an Ipad. Download the lesson materials and full lesson plan by clicking the link below.

1.  Pass out the rubric and explain to the students that today they will be getting into small groups of 4 or 5 and writing a script for a talk show.  One person will be the interviewer, one will be Wilbur, and one will be Orville. They must have one to two locals that were present that day as well. Based on what we have learned they must write a script in which the characters are describing the actions and feelings of that day to the interviewer. The script should be factual. As for the locals, use as much fact as possible but their story may be somewhat fictional. What would they have said?

2.  What does an interview look like?
Watch the following kid video with Buzz Aldrin:
http://kpcnotebook.scholastic.com/post/conversation-buzz-aldrin-video

3. Break students into groups. Have them start writing their script. When they are finished they should practice reading it.

4.  When they are comfortable reading it they should video themselves using their ipad.  They can use their script if needed since they don’t have ample amount of time to learn their lines.

Script format - A written work by screenwriters for a film, television program or video game. These screenplays can be original works or adaptations from existing pieces of writing. In them, the movement, actions, expression and dialogues of the characters are also narrated.

Students will be assessed based on their script, if it is factual, and using the attached rubric. (Rubric is attached to full lesson plan. Download by clicking the lesson materials link.

If Instagram was around in 1903 what would have been posted after the first flights?  Pretend you are Wilbur, Orville or one of the locals that were there that day and make an Instagram post based on what happened that day.

Helping the Wright Brothers, A Tale of First Flight Helpers by Susanne Tate

Who Were the Wright Brothers by James Buckley Jr