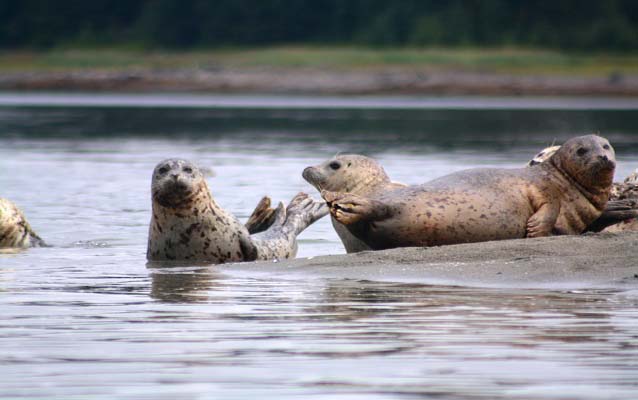 Grade Level:
Middle School: Sixth Grade through Eighth Grade
Subject:
Science
Lesson Duration:
60 Minutes
Common Core Standards:
6.SL.1, 6.SL.2, 7.SL.1, 7.SL.2, 8.SL.1, 8.SL.2
Additional Standards:
National Science Standards Addressed Grades 5-8: NS.5-8.1 Science as Inquiry, NS.5-8.3 Life Science, NS.5-8.7 History and Nature of Science
Thinking Skills:
Understanding: Understand the main idea of material heard, viewed, or read. Interpret or summarize the ideas in own words. Applying: Apply an abstract idea in a concrete situation to solve a problem or relate it to a prior experience. Analyzing: Break down a concept or idea into parts and show the relationships among the parts. Evaluating: Make informed judgements about the value of ideas or materials. Use standards and criteria to support opinions and views.

*What characteristics distinguish seals from sea lions?
*How can careful observation lead to a better understanding of an animal?
*How are seals and sea lions similar and different?

Our "Seals of Glacier Bay" curricula unit is divided into three lesson plans, each taking one class session to complete. They are part of our "Middle School Scientists" series that explore the fascinating research and resources of Glacier Bay National Park. In this lesson, students, as researchers, observe the similarities and differences between seals and sea lions and create a Venn Diagram to graph these features.

Pinnipeds, also known as fin-footed mammals, are a group of carnivorous marine mammals that include three families of mammals: seals, sea lions, and walrus. Two species of pinnipeds live in Glacier Bay: harbor seals and Steller sea lions. Since they are both pinnipeds, these two animals have many similarities, but they also have key differences. With a little observation it is easy to distinguish between the two species.

Harbor seals are considered a "true seal" along with monk seals, leopard seals, and ribbon seals. True seals are found in marine and freshwater habitats in the Atlantic and Pacific regions. These seals have no external ear flaps (pinnae) and are sometimes called "earless seals." True seals have short necks and short flippers. Their short flippers cannot be pulled under their body, making land movement difficult. Though seals are graceful and agile under the water, they are awkward on land and usually move in an undulating, caterpillar-like manner. Underwater propulsion comes from moving their hind flippers in a back and forth motion and using their front flippers for steering. Males and females are generally similar in size and shape. Pups grow quickly and are usually weaned within several weeks.

Steller sea lions, along with California sea lions and Northern fur seals, are known as "eared seals" for the presence of external ear pinnae. Sea lions have a more limited range than seals and are found only in marine swim underwater, sea lions flap their front flippers up and down, as if they were flying and use their hind flippers for steering. Sea lions are often vocal, emitting roars, barks, and growls. Adult sea lions are dimorphic: with male sea lions twice as big as a female with a thickened neck and a pronounced skull crest. A dominant male sea lion will form rookeries and mate with many female sea lions and defend his rookery from other males. Pups are born in the rookeries and many stay with their mothers for more than a year.

*Decide whether students will complete the investigation and explaination independently, in homogenous pairs, or in heterogenous pairs.

*If you have access to an AV computer, make sure the video link works to display.

*Make one copy per student of the video questions, vocabulary, and venn diagram. This can be copied as a packet.

Use these questions during the video shown in the lesson hook.

2. Introduce students to the group of animals known as pinnipeds. What are the characteristics of pinnipeds? What other animals do they think belong to this group? Do the students know anything else about seals and sea lions?

3. Each student should choose one image of a seal or sea lion. This folder have multiple images of harbor seals and Steller sea lions. Make these images available for your students by either printing the images or allowing students to see them on computers. Students may also search for images on the internet, but they should be aware that many images are mislabeled. If they do search the internet for images, students should identify the images as harbor seals or Steller sea lions.

4. Once a student has selected an image, they can begin to draw the image in their science journal or on a piece of paper. These should be careful, detailed drawings, not just quick sketches. Many of the images have more than one animal so students may draw all of them and focus on the whole scene or they may choose to look carefully at one or two animals. Remind the students to draw what they see, not what they expect to see. Have them look carefully at color, flippers, body shape and posture, nose shape, etc…

5. Words can be used in their drawings as well. If colored pencils aren’t available, students should use words to describe the colors. They may also note where the animal is located or any other features of interest.

6. Draw a Venn diagram on the board and label one circle Seals and the other circle Sea Lions. In the video, Jamie Womble listed numerous differences between these two groups.

7. Ask the students to help list the differences of these two groups and write them in the appropriate circle on the diagram. Now that the students had time to observe a seal or sea lion, have them write the similarities of seals and sea lions on the Venn diagram. This could be an individual project for students by passing out the Venn diagram sheet.

8. Ask students to discuss how nature journaling was useful in helping to compare and contrast pinnipeds.

*Pinniped - Any of various carnivorous aquatic mammals of teh sub-order Pinnipedia that have flippers as organs of locomation including seals, walrus, and sea lions

*Flippers - A broad flat limb without fingers, used for swimming by various sea animals such as seals, whales, and turtles.

*Anatomy - The branch of science concerned with the bodily structure of humans, animals, and other living organisms, especially as revealed by dissection and the separation of parts.

Use this venn diagram to assess understanding of the similarities and differences between Stellar Sea Lions and Harbor Seals.

*Hetereogenous pairing during investigation and explaination

*Ask pairs to join with another pair prior to discussion to share answers on the venn diagram.

*Ask students to hypothesize what features all pinnipeds will have in common.

*Then, take a look at other pinnipeds such as walrus to confirm or refute the hypothesis. Have students expand the Venn diagram to include these other animals.

Seals of Glacier Bay Lessons 2 and 3