Role of Women at the Springfield Armory 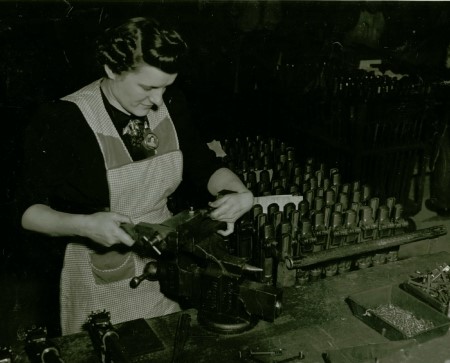 What role did women play at the Springfield Armory? How did the views on women working at the Armory change over time?

1. Analyze primary sources.
2. Compare and contrast primary sources.
3. Explain the role women played at Springfield Armory, specifically during WWII.
4. Use evidence from a text to support answers.
5. Describe the point of view of an author.

While Springfield Armory operated as a federal armory from 1794 until 1968, the workforce was mostly men. It was not until 1917, during World War I, that women were hired to work in the shops. Most of the women were laid off after the war ended, but the demand for female workers increased dramatically during World War II because of men enlisting in the military. It was with great reluctance that women were recruited, as evidenced by the Do Now article, but they became an integral part of the Armory workforce, and proved themselves equally capable, if not superior to their male counterparts in all of the jobs at the Armory.

This lesson/activity is designed to either be taught or assigned virtually. It can also be taught in person. The only supplies that need to be gathered are copies of the activities if being done in person. In addition, if being done in person, the teacher may want to have copies of the newspaper article printed out for students to share from class to class, in order to cut down on the number of copies to be made.

Using a page from the Springfield Republican, students will analyze the photos and text to learn about the women who worked at Springfield Armory.

This worksheet guides students though a series of activities examining the role of women at Springfield Armory.

This worksheet guides students though a series of activities examining the role of women at Springfield Armory. This is a modified version for struggling learners.

Step One: (before beginning lesson)

Forge – a special fireplace, hearth, or furnace in which metal is heated before shaping.

Milling – an act or process of producing shaped surfaces with a machine.

Foreman - a person in charge of a particular department, group of workers, etc., as in a factory

A modified version of the activity has been included for struggling learners.