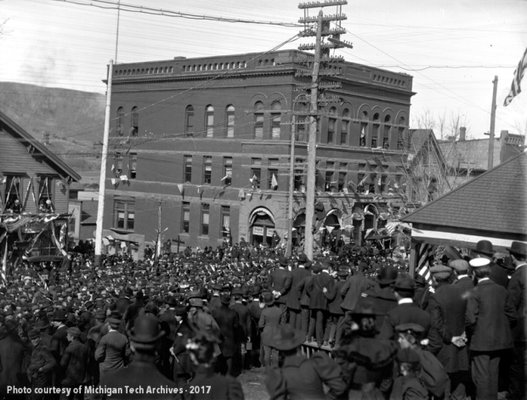 Students will be able to research and summarize at least one conflict or war that the United States was involved in between 1800 and 1980.

There were many battles that the United States was involved in from 1800-1975 but not all of them affected copper mining in the Keweenaw, especially when some of the conflicts started and were completed before the first industrial mine in the peninsula was fully established.

In 1812, Great Britain and the United States went to war over trade restrictions and territorial expansion. It ended in 1815, following the Treaty of Ghent.

The War of Texas Independence, also known as the Texas Revolution, was fought from October 1835 to April 1836. It enabled Texas colonists to break free from Mexico and create the Republic of Texas. Battles between the United States and Mexico continued. 1846 signaled the start of the Mexican-American War, a war over land acquisition, which lasted until 1848. Mexico fought to keep land they thought was theirs while the United States fought with “Manifest Destiny” in mind, wanting to keep Texas and gain more land from Mexico’s northern border. The end, in 1848, came through the Treaty of Guadalupe Hidalgo in which Mexico ceded a large territory that included the present states of Colorado, Arizona, California, Utah, Nevada, Wyoming and New Mexico. The United States exchanged $15 million and forgave certain Mexican debts.

Wars prior to 1848 were mostly conflicts between different nations. The Civil War, which took place between 1861 and 1865, was much different. It was due, mainly from conflicting viewpoints between northern and southern states. The Union defeated the Confederate army, but the results included large casualties and a need to rebuild the country.

The United States was also in conflict with American Indian nations over land and resources, at various times signing treaties with Indian nations, forcing relocations (including Cherokee removal from the Southeast to Oklahoma, the Trail of Tears), and also declaring war. Some of these wars include the Creek War of 1813-1814 and the Black Hills War (which included the Battle of the Little Big Horn).

In 1898 came the Spanish-American War. As a result of this war, the U.S. gained territory and influence in the Western Pacific as well as in Latin America.

World War I was fought from 1914 to 1918, triggered when Archduke Franz Ferdinand of Austria was assassinated. His assassination led to European leaders issuing threats, mobilizing their armies, and eventually to war. World War I ended in 1918; the Versailles Treaty of 1919 was signed in hopes of avoiding another large-scale conflict. World War II, however, began in 1939. It was the largest war in history, with the broadest geographic scope and the most casualties. The world was divided into two main sides: the Axis and the Allies. The Axis included Germany, Italy and Japan. Allies were France, Great Britain, Canada, the United States, the Soviet Union, and China. It began in part because some disputes from World War I remained were still not resolved. Germany was also invading other countries trying to acquire territory. When Hitler invaded Poland in August 1939, Great Britain, Canada, and France declared war on Germany, starting World War II. This war ended in 1945 when the last of the Axis surrendered.

In 1950, the Korean War began when North Korean People’s Army soldiers crossed the 38th parallel into South Korea. The United States backed South Korea against the communist north and saw the battle as a means of preventing communism from spreading throughout the world. It ended in 1953 after two years of negotiating. This war was followed by the Vietnam War in 1960. The Vietnam War was fought by North Vietnam and Viet Cong against South Vietnam and the United States. It was an unpopular war in the United States, and the U.S. withdrew troops in 1973. The war officially ended in 1975.

Students will choose one of the wars or conflicts listed on the timeline they created in pre-activity #1.

1. Students will choose one of the wars or conflicts listed on the timeline they created. Ensure that the following wars are covered: War of 1812, Civil War, World War I, and Korean War.

2. Each student will research their chosen war and write notes. They will then write at least 1 paragraph summarizing what happened.

3. Students will present the information to the class and then write the description of the war or conflict on the timeline from Pre-activity #1.

Conflict- a fight, battle, or war between opposing forces

Independence- free from outside control