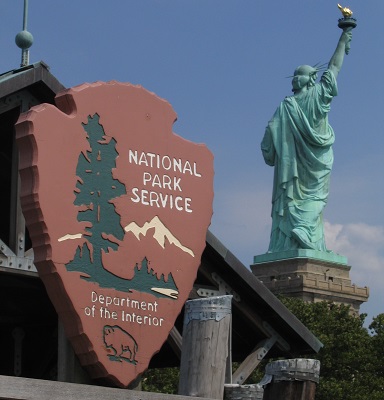 At the end of the lesson, students will be able to:
1. Identify the different natural elements that have helped the Statue of Liberty change color over time.
2. Describe how the oxidation process can impact metals like copper.
3. Interpret whether the Statue of Liberty will hold as much cultural significance today had the copper not oxidized

1. Explain that the class will see the first- hand effects of oxidation on copper; a similar process that had impacted the Statue of Liberty over a century earlier.

2. Take two small cups and pour a vinegar/lemon juice solution into one, and water into another in front of the students. Ask them to turn and talk with a partner about what they think will happen once the pennies are dropped into the solutions. Invite them to share their predictions with the class. How do they know their prediction is right? Prompt them to include details in their justification.

3. Distribute two pennies and ask each student to place the pennies in the vinegar-based solution. Let the pennies sink to the bottom.

4. Once one of the pennies has turned green, ask students what they think happened. Invite their responses.

Explain that the change in coloration to the penny that was dipped in the vinegar/lemon juice solution is known as the chemical process of oxidation. (Note: Oxidation initiates a process that forms a patina (or stronger copper), where oxygen come in contact with metal (where in this case) creating a stronger copper.)

5. Ask the students if there is a word in oxidation that they might already know. Oxygen is a gas that is found in the air. Pennies are made from copper, and copper, when exposed to oxygen, experiences a chemical reaction known as oxidation.

As the class waits, explain that the Statue of Liberty underwent a similar process when she was brought to the United States. Because the Statue of Liberty had been exposed to the salt water and the musty air in the New York Harbor, the Statue had changed color gradually (from a deep bronze to a turquoise green) over time.

6. Ask students if they can think of any monuments around the city or in their neighborhood that might have undergone the process of oxidation. The Statue of Liberty is made entirely of copper and is now green-colored due to the effects of oxidation.

7. Inform students that because color photography had not been made available, we have a hard time determining how long exactly the Statue took to change to its now iconic green. We can examine the black and white photos of the time period, however, to verify that the Statue was originally brown or dark grey. Invite students to take a look the different sets of photographs, and as a group, have them piece together what they believed to be the chronology in which the Statue had changed colors. Explain that the National Park Service believes that the oxidation process took about 25 to 30 years to fully change from bronze to green.

Oxide- a compound in which oxygen is bonded to one or more electropositive atoms.
Patina- a film or incrustation, usually green, produced by oxidation on the surface of old bronze and often esteemed as being of ornamental value.
Copper- a malleable, ductile, metallic element having a characteristic reddish-brown color: used in large quantities as an electrical conductor and in the manufacture of alloys, as brass and bronze.
Oxygen- a colorless, odorless, gaseous elementconstituting about one-fifth of the volume of theatmosphere and present in a combined state innature.
Chronology- the sequential order in which past events occur.