Pottery of the Ancestral Pueblo 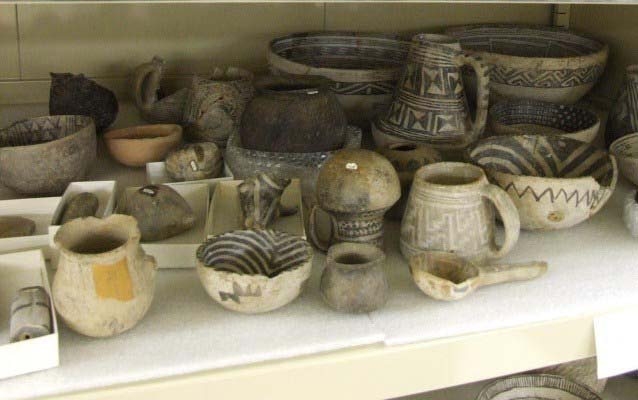 Essential question: How did the ancestral Pueblos make their pottery? What did they use to paint their pottery, and how did they choose their designs?

In this art-based social studies lesson, students of all grade levels will learn about native pottery. There are detailed instructions for making clay and pottery with students on pages 9-12 of the lesson pdf.

Each pot sherd has a story and helps to complete the picture of a people in the absence of a written history. The ancestral Pueblo people created pottery for utilitarian, ceremonial functions and rituals, and trade. The styles of the pottery found at Aztec Ruins had specific relevance to their particular pre-historical, cultural context and intended use.

Have students as a class or in small groups visit the Junior Ranger online tour. https://www.nps.gov/features/azru/

Pottery was produced by a method called coiling and scraping. A clay "snake" is coiled around in a spiral, forming the base to a vessel (a bowl, for instance). Additional "snakes" or coils are added on, creating the basic shape of the vessel. Then the coils are scraped together, erasing all signs of the individual coils. The ancestral Pueblos probably used shaped pieces of wood or gourds as "scrapers" to do this work. Smooth stones were used to "polish" the surfaces of bowls.

Ancestral Pueblo pottery is called Black-on-White. The white is from the color of the clay. The black paint used for the designs was made from boiled plants (like beeweed or tansy mustard) or from crushed rock with iron in it (such as hematite). Paint brushes were made from the fibers of the yucca plant.

Today you can see many examples of our own culture's use of designs. For instance, most of our clothing has some design, pattern, logo, or motto on them. These elements may be important to the wearer or may not mean anything at all. This also holds true for decorations on our tools, dishes, houses, cars, etc. The ancient Pueblo people were no different. They too used designs in their daily life. These designs may have had specific meaning to them or may have just been decoration. Unfortunately, we can't ask them where they got the inspiration for their designs. Modern day Pueblo people have helped archaeologists in explaining some ancient images. Because of their ties with the ancient Pueblo people, modern Pueblo people can give unique interpretations to past designs.

Introduction: Talk will include information pertinent to Aztec Ruins and the tremendous variety of pottery styles available from the excavated site due to the trade environment that was prevalent at the site (use readings, online tour, etc.)

Answer the "essential question" and explore design motifs: After familiarizing yourselves online with the artistry of the modern pueblos (http://pueblopottery.net/), which of the modern Pueblos' pottery most closely exemplifies the ancient Pueblo pottery we have found at Aztec Ruins?

Design items using their own arrangement of motifs: Construct a stylistically inspired pot you most wish to emulate. This can be achieved through drawing with pencil on paper or by using clay to form your object as per the demonstration.

Corrugated: pottery with rows of little indentations on its surface.

Fillet: rope of clay that is coiled on a base to create the walls of a pot.

Fire cloud: dark smudge on a pt that was fired outdoors caused by a piece of buring fuel touching the pot.

Fired: baked at a high temperature.

Heartline: painted arrow leading from the mouth into the chest of an animal motif.

Incised: fine lines scratched through the surface of an unfired pot.

Leather hard: stage of dryness at which an unfired pot is not longer malleable.

Ollas: Spanish for “pots”often used to carry water and formed at the bottom to fit the bearer’s head.

Oxidizing atmosphere: the condition in which air is allowed to reach the pot throughout the firing process.

Paste: mixture of clay and temper.

Pueblo: Spanish for”people” or “town”. Now the traditional people of the Rio Grande and Jemez River valleys as well as Laguna, Acoma, Zuni, and Hopi.

Puki: bowl-shaped object used to support the curved bottom of a pot.

Reducing atmosphere: occurs when oxygen is kept from pottery during firing.

Slip:liquied clay applied over a pt to smooth and/or color it. Some slips have an importantchemical reaction with certain paints.

Split rectangles: design element in which a rectangle is divided in half diagonally and each half is decorated differently.

Temper: gritty material added to clay to prevent a piece from shrinking or breaking as it dries or is fired.

Yucca: very fibrous evergreen plant that grows throughout the Southwest, used by some potters as a paintbrush.

Polishing stone: used to smooth the surface of the pot prior to applying slip or stain to unfired pot.

Scraper: curved tool usually made from a gourd to smooth and shape a coil pot.

Reconstruction: in prehistoric pottery, a reconstructed pot (one that has been broken and pasted back together) is considered as valuable as an intact pot, providing it is complete.

Restoration :many intact pots have stress cracks. Intact pots might be stabilized. A restored pot has missing pieces filled in and replaced. Many experts prefer patching to be obvious, so you can tell new from old at a glance.

Have students create together some examples of the visual elements of the pottery using a black clay pot template (i.e. "heartline", line break, etc.)

There are 20 Pueblo villages left in the Southwest; there were at one time in history 200. Each of the 20 Pueblos is famous for art and/or crafts and each has a specialty. Maria Martinez lived in the Pueblo of San Ildefonso and she was famous for creating black pottery. Read and skim the magazine about Maria. Mention that, like all Native Americans, Maria respected the earth and its resources. She only took enough DIRT for one pot at a time so that she did not waste it. Remind them to look around at lunch and be aware of what we waste!

Procedure Part 1: Divide a clay chunk into 3 equal pieces and roll each new chunk into a coil. It takes a little practice, using a forward rolling motion with the hand held straight and using palms and gentle pressure. It works best to stand and use a forward rolling, then lifting, hand motion. When the clay moves toward the edge of the table, lift and move it back, starting over. It does not work well to roll the hands back and forth over the coil. Roll each chunk into a coil, then roll coil up and place in bag. Wet paper towel and drop into bag with coils, write name and section on the tag. Gather ends of bag and put on twist tie. Make sure the whole bag is closed tight.

Procedure Part 2: Pass everyone a paper towel and round slab circle. (Teacher should put last name and class section on bottom of each.) Teacher does a demonstration of scoring and painting slip around top edge of slab. Add coil, pressing gently, pinch off and smooth together ends when it is wrapped around slab and they meet. Build three rows high, and then add some decorative finishes for the last two rows, such as S shapes made from coils, waves made over a finger, or rolling little balls, pinching them flat, and adding them in openings made by the wave designs. Be sure to stress that everything that is added MUST be scored and slipped. Also stress that the clay coil pot should not be picked up. Turn the paper towel as you work to build it, and the shape will not get lopsided. Add two more coils in the same way. There are now three rows high on the slab. The last two rows may be any design we have talked about. Smooth out any cracks by painting water or slip over them. Projects must dry and be fired.

Procedure Part 3: Paint acrylic gloss medium tinted with blue tempera on whole top and sides of coil pot. Do not paint the bottom. Make sure you get into all the crevices with the bristle brushes and acrylic medium. Clean and dry the brushes thoroughly. Gently fan pot till completely dry. Paint the sienna over the whole pot covering the acrylic with sienna. Do not paint the bottom. Teacher wash off the sienna, leaving the brown color in the deeper parts to create an antiqued effect