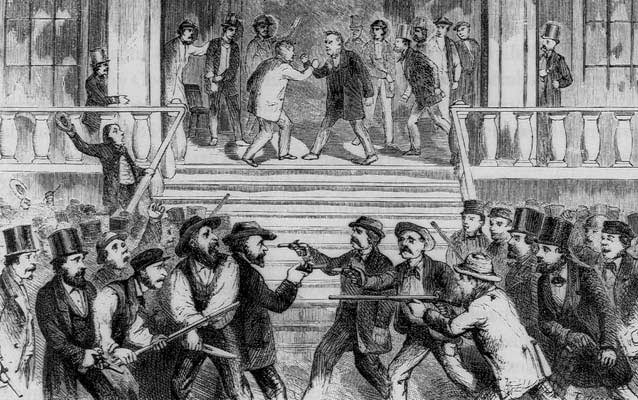 Why was Bleeding Kansas important to the history of the US? What is popular sovereignty and what is its importance with American government?

The “Bleeding Kansas” lesson is planned for multiple days for students to do research. This lesson will take 4-5 class periods with a duration of 55 minutes each (could be shorter or longer depending on scope of project). The actual lesson and activity will only take a day

However, many settlers and politicians did not agree, so Steven Douglas introduced and got Congress to pass the Kansas-Nebraska Act, which allowed for the two new territories to decide by popular sovereignty whether or not to allow slavery. Popular sovereignty meant that each territory would hold an election to decide. For Nebraska this process was simple, but in Kansas where it was bordered by Missouri that allowed slavery, the process did not go as planned. From 1854 until the outset of the Civil War in 1861, violence, bloodshed, and dishonest voting practices plagued the territory of Kansas, which led to the area being nicknamed "Bleeding Kansas". Men from Missouri invaded Kansas at every opportunity to vote, illegally, in the elections to decide the issue of slavery.

The struggle resulted in a series of six territorial governors, four territorial constitutions, and two rival legislatures operating independently of each other. Territorial disputes escalated into acts of violence like the sack of Lawrence and John Brown's attack at Potawatomie Creek. After a series of conflicts over a seven year period, Kansas would finally be admitted as a free state, but not until January of 1861-after the secession of Southern states, whose congressional representatives had previously opposed Kansas statehood.

The division over the territory of Kansas and the ensuing violence was just the beginning of what the country would suffer over the next four years during the Civil War. The struggles and violence in Eastern Kansas and Western Missouri was a prelude to the approaching confrontation throughout the country.

Even before the Civil War officially began, men killed one another over the question of slavery.

Bleeding Kansas deals with the years leading up to the actual start of the Civil War, during a time when the Kansas Missouri border burned in the forefront of the news. This lesson will teach students about the guerilla warfare that took place, the important people involved and the events that eventually sparked a full Civil War.

Let students choose the person or event that they would like to research from the following list. (If desired, teachers could also assign the research topics.) Students will need to make sure that when they are researching via the internet that they include Fort Scott, KS in their search or they may not get the correct information.

Students should be given time to research and study their topics. Teachers should follow up with each student to make sure that they are using primary resources and that they are reading multiple accounts of the same event. This will allow the students to evaluate their research for bias before presenting a finished project. Depending on how much class time the teacher would like to give students to work will guide the number of days needed.

Students should put together either a visual, i.e. poster, or a digital, power point or movie, to show the audience the information that they have researched and found credible. Students should include a works cited page. Students should also write and turn in the first draft of their oral presentation for teacher review.

Teachers: As an extension activity you could ask the students to group themselves by topic based on how they think the events or people were connected. Ask them to explain why they grouped themselves the way that they did. (There will be multiple ways to do this based on the people and events.)

Teachers will assess in multiple areas:

Books listed for extension use.

Historical Fiction to accompany the lesson: