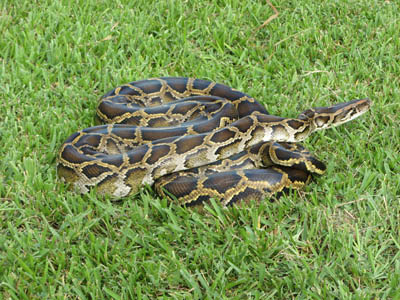 There are many different and varied invasive species, but for this lesson the key points are that the species is (1) not native and (2) causes harm to either the economy or the environment.  This activity will allow students to focus on one invasive species and present the information that they find about their species to classmates in a classroom go-around at the end of their research.

Students begin this activity by watching a PowerPoint on “Ten Important Invasive Species” that are problems at different locations in the United States. There are many different and varied invasive species, but for this lesson the key points are that the species is (1) not native and (2) causes harm to either the economy or the environment. This activity will allow students to focus on one invasive species and present the information that they find about their species to classmates in a classroom go-around at the end of their research. The go-around gives students a chance to present their information in a more informal non-threatening way than a presentation in front of the whole classroom.

There are many threats to biodiversity in the world including habitat loss, pollution, increase in human population, and overharvesting of species, but the impact of invasive species on native plants and animals can be one of the most profound. When non-native species are introduced into an area they often multiple rapidly due to no native predators or other limiting factors. Native species are often unable to compete with the introduced species for the same resources due to the fact that invasive plants often alter the ecological conditions (such as fire regimes and hydrology) making it unfavorable for the native species.

Invasive species enter different ecosystems through a variety of ways some intentionally and some unintentionally. The pet and aquarium trade is a huge culprit responsible for invasive animals. After purchasing exotic pets, they often escape or people may set them free when no longer wanted. Many species are introduced to solve a problem but they themselves then become a problem. For example, kudzu was introduced as a plant to prevent erosion and as a food source for livestock. The problem is that kudzu grows too well and has thrived in the warm climate of the southern states covering acres of land and everything in its path.

Power Point 1: To use in preview or lesson hook.

1. Students will draw from a container the name of an invasive species to research for the go-around. In Attachment 1, “Invasive Species 1: Invasive Species Go-Around, you will find a list of “100 of the World’s Worst Invasive Alien Species”.  Another option is to let students self select an invasive plant or animal that they would like to research. The instructor could also focus on one particular state, country, or continent. A google search of “list of invasive species for ___(name of country or state)____ will produce many results.  Another resource for your area would be to contact local agencies for a list of invasive species in your area.  The benefit of having a list of invasive species in your area would be to further educate students about local problems. After drawing their species name from the container, you may choose to let them trade with another student.

2. In Attachment 2, “Invasive Species 1: Invasive Species Go-Around”, you will find guidelines for a display board or research poster with necessary requirements for their presentation. There are many options for presentation: a three-fold poster (traditionally used for science fair projects), a research poster (commonly used by undergraduates at the college level), or presentation on individual computers (Prezi, PowerPoint, or other application). The idea of a go-around is that students “go-around” to different projects and gather information from other students rather than a formal classroom presentation.

3. Students will need research time on their species. Time for project is dependent upon how much class time you want to give them for the project’s research and presentation. Research can be done in class or assigned as a homework project. You could also do a combination of research done in the classroom and final project poster at home.

Peer review is an invaluable tool in helping students modify and “fine-tune” their project. Give students time to evaluate each other’s project using the grading guidelines and to make sure all information is presented and easy to view.

Students will present in groups during a go-around. Students are given a chance to have a more interactive one-on-one conversation than is allowed in a typical classroom presentation. Options include dividing your class into 2-3 groups with one group presenting while others “go-around” and then rotate to the next group. If you team-teach, you may have the go-around with your co-teacher’s class or even your whole grade-level with multiple teachers. Students are required to view 3-4 presentations by their classmates during the go-around and fill out information about different invasive species. You can let students choose projects to observe or have them draw names/or numbers of the projects they will view. For each project, they will write two positive comments for each section on their worksheet for four different projects in Attachment 3, “Invasive Species 1: Invasive Species Go-Around”.