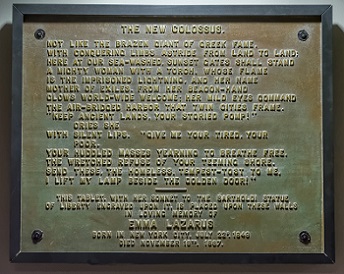 This activity helps students explore the different meanings of the Statue of Liberty and help them develop their own interpretations for the monument today.

3. Introduce Emma Lazarus’s quote (5 minutes) – Ask students, “When you look at other the inspirations for the Statue, we find that famed poet Emma Lazarus wrote ‘Give me your tired, poor, and huddled masses’ which is now one of the best-known statements associated with the Statue of Liberty. ”What do you think that quote means?” or “What do you think the text says about what the Statue represents?” Ask for several student responses. (Print out the full version of Emma Lazarus’s “The New Colossus.”)

Teachers Note: Using a large piece of white paper, create a similar silhouette (next page) of the Statue of Liberty and place the enlarged recreation at the front of the class. Students can place their completed responses in the interior of the lined drawing. Alternative: Print out a silhouette copy of the Statue and have students write their responses on the sheets. That way, each student can share their responses to the class.

5. Pair-Share and Homework (5 minutes) – Invite students to share several of their responses about what the Statue of Liberty means to them today. At the end of the lesson, encourage the groups to think about how the Statue of Liberty’s meaning/message continues to change, and invite them to create their meaning. If interested, hand out the blank “Statue of Liberty newspapers” to students as a post-visit activity.

Astride: in a posture of striding or straddling; with legs apart or on either side of something.
Beacon: a person or thing that illuminates or inspires.
Brazen: shameless or impudent.
Exile: anyone separated from his or her country orhome voluntarily or by force of circumstances.
Huddle: to gather or crowd together in a close mass.
Imprison: to confine in or as if in a prison.
Pomp: stately or splendid display; splendor;magnificence.
Refuse: something that is discarded as worthless oruseless; rubbish; trash; garbage.
Storied: recorded or celebrated in history or story.
Teeming: abounding or swarming with something, as withpeople.
Tempest: a violent commotion, disturbance, or tumult.
Wretched: very unfortunate in condition or circumstances; miserable; pitiable.
Yearn: to have an earnest or strong desire; long.