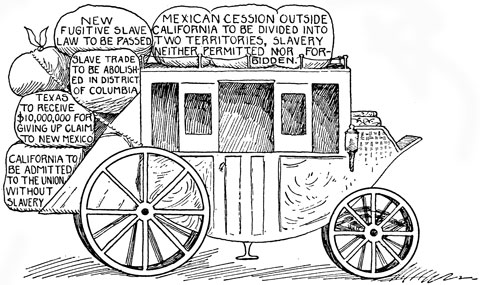 Is Compromise necessary for the success or survival of a representative government?

Discuss parts of a rubric and how to create one.

Ask students to brainstorm issues that people always argue over. When do issues come up the most? When do people talk about them the most? How are issues commonly dealt with today? Have students construct a rubric to determine how effective a compromise is. Have them create categories to judge the impact and fairness of compromises. What elements are needed in order to have a successful compromise . (Could have them create a WATCH OUT rubric...rank items that could sabotage compromises....rank them from most to least dangerous?.

Discuss how events and context occurring in the United States impacted the construction of the Compromise of 1850:
1) Mexican-American War - Reasons for war and outcome)
2) California Gold Rush of 1848-49
3) Status of Senate (balance)
Points of View:
1) Pro-Slave-ideology that perceives slavery as a positive good or an otherwise morally acceptable institution.
2) Abolitionist-person who favors abolition of a practice or institution, especially capital punishment or (formerly) slavery
3) Freesoiler-member of an anti-slavery political party in the years before the Civil War that supported free distribution of government-owned lands. Opposed spread of slavery into new territory.
Issues:
1)Territory in the U.S.-1840's U.S. acquired massive territory in Southwest and Pacific Coast. A complex mix of political, social, and economic factors fueled American expansionist sentiment in the 1840's.
2) Boundaries-Dispute between Texas and New Mexico over shared boundary
3)Slavery-the state of a person held in forced servitude.

Assign students multiple states that represent the points of view above. Have them craft a position that states what the goals are for each state and WHY their goals are justified. Then have them develop a plan that will allow them to have their goals realized.

Once students construct their plans, compare them to the actual Compromise of 1850. How are they alike and different? What did they include that the Compromise of 1850 did not? Have them evaluate the effectiveness of settling the dispute of territory acquisition and the issue of slavery by comparing their rubrics to the compromise itself for evaluation.

Concluding Discussion:
What issue today could end up being debated like the ones that drove the need for the Compromise of 1850?
How can these issues be solved without worsening the situation? (What needs to be done and what needs to be avoided?)

Have students construct questions they have about the Missouri Compromise.

Then have the student take their questions and collaborate with three other students.

The student should record their classmates' responses in a paraphrase form.

Then construct a one sentence summary of what the fellow students shared.

Then, the student will take their set of original questions to an expert student (one that has been designated by the teacher): together the students will collaborate and discuss points that are accurately clarified and points of misconception.

Have students construct responses that demonstrate their ability to grasp abstract concepts and critically analyze events and information to infer its overall impact.

Have students share their reflection with a student that sees the content differently or in a way that is more supervisual in understanding. After the student shares their reflections, have the listener write a response to their part on a post-it note and place on the teacher's desk (or designated spot by the door on their way out of class).
1) What is one thing that you still have a questin about after your conversation?
2) What are two things that you feel you understand better?
3) What are three things that you now know FOR SURE?