The Forgotten Warriors of  the Civil War 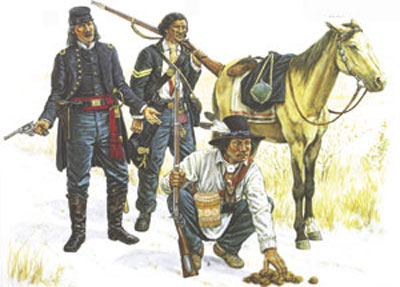 Grade Level:
High School: Ninth Grade through Twelfth Grade
Subject:
Social Studies
Lesson Duration:
60 Minutes
Thinking Skills:
Understanding: Understand the main idea of material heard, viewed, or read. Interpret or summarize the ideas in own words. Analyzing: Break down a concept or idea into parts and show the relationships among the parts. Creating: Bring together parts (elements, compounds) of knowledge to form a whole and build relationships for NEW situations.

The Forgotten Warriors of  the Civil War  is the story of the tragic effect that the American Civil War had upon the tribes of the Indian Territory (modern-day Oklahoma).  More than any other particular group in the United States at the time, the Cherokee, Chickasaw, Choctaw, Creek, and Seminole (the Five Civilized Tribes) were divided between loyalty to the Union and the secessionist Southern states.  This lesson will teach students about why this “civil war within a civil war” occurred.

When the Civil War began in April of 1861, the federal forces were withdrawn from the Indian Territory. Seeing an opportunity to gain control of territory and establish military alliances, the Confederate government sent emissaries to sign treaties with the Five Civilized Tribes as well as other fragmentary people groups in the territory. Absent a federal presence, many tribes did so. However, the signing of those treaties led Amerindians who were still loyal to the Union to seek protection from the federal government. Pro-secessionist Native Americans promptly began driving the pro-Northern groups out of the territory and into Kansas, creating a refugee crisis for officials in the newly-created state. As Southern officers began organizing the Indians still in the territory for action in the war, Kansas officials and Union officers began to advocate for the organization of Native forces as well, principally from the refugees of the Indian Territory. Even though both sides attempted to use their Native troops in Missouri and Arkansas, the main goal was to use those troops to secure control of the Indian Territory. What resulted the Native Americans on both sides fighting against their brethren on the other side, many times in brutal fashion.

The Indian Territory became a wasteland from the wanton destruction with the result that starvation was rampant, home and farms were destroyed, and few Indians remained on their own soil. All of this was happening against a backdrop of betrayal by the government officials on both sides. More tragedy awaited the Amerindians who fought on both sides when the war ended.

Reading through the web page on this topic and viewing the video presentation posted at the bottom of this page would be good preparation for this lesson.

lesson plan in one succint document

There's no place like home! To American Indians suffering in barren refugee camps in eastern Kansas during the Civil War, thoughts like this must have gone through their minds as they longed for the warmth and security of home in Indian Territory (Oklahoma). There were those that could remember when home was elsewhere, but after more than two decades, they had come to regard Indian Territory as home.

Driven to Kansas in 1861 by Confederate forces, the refugees drew attention from government agencies in Kansas and the Union Army. Seeking to strengthen their position in Kansas and badly needing manpower, the commanders of the Union Army made the decision to recruit and train Indian soldiers from the ranks of these displaced tribes. Ultimately, the army created three regiments of Native Americans known as the Indian Home Guards. Indians welcomed the opportunity to become soldiers as a means to return to and defend their homes, but challenges faced them every step of the way.

Step 1: Divide the class into two groups (this can be done by student initiative, teacher assignment, or by drawing names out of a hat). One group of students will be approaching the assignment from the aspect of the Union viewpoint while the other group will take the Confederate viewpoint. Both sides will be respon-sible for researching the following associated with the Five Civilized Tribes and the Civil War:

Who was behind the idea of using Native American troops?

How did each side convince the Amerindians to participate in the war?

What kind of material support did each government give to their Indian troops?

What was the name of the major units created for Native American troops, who was in each unit, and who

What major problems were encountered in trying to organize the Amerindians in a military fashion?

Step 1a: For the group that will be researching the Union perspective, they should specifically research these items:

Why did many Native Americans in the Indian Territory support the Union?

The Indian refugee problem during the Civil War.

Why was there opposition to the use of Native American troops.

Step 1b: For the group that will be researching the Confederate perspective, they should specifically research these items:

What led members of the Five Civilized Tribes to support the Confederacy?

Successes of the pro-Confederate Amerindians.

Step 2: The time determinate for this step is up to each individual teacher. Knowing that this topic would be covered under the umbrella of the entire Civil War in a normal classroom, the amount of in-class research would probably be limited. A suggestion would be to make it a long-range project with most of the research and finished product being done outside of the classroom. Putting a groups’ final project together might necessitate the use of a class period.

Step 3: Each group would be required to put together three different visuals. The first visual would be group-dependent: the North would need to prepare a visual of Kansas showing the location of the various refugee groups from the Indian Territory, Fort Scott, where any confrontations between the two sides occurred, and major geographical markings. The South would have to prepare a visual of the Indian Territory. Fort (Gibson) Blunt, where any major confrontations between where the two sides occurred, and major geographical markings. The second visual would contain the names of the Native American military units for their perspective and Amerindians associated with that unit. The third visual would contain the other major non-military figures associated with the North and South who played a role in the Five Civilized Tribes and the Civil War. These visuals can take the form of posters, PowerPoints, or student-produced films. They must be visible to anyone viewing the students presentation.

Step 4: Each student would be required to submit a bibliography containing at least three sources which could include books, magazine articles, newspaper articles, diaries, etc.  Visuals should have a citation as to their source.

refugee-one who has been driven from their home due to war, violence or natural disaster and seeks shelter and necessisities for survival elsewhere.

secessionist-a person who favors formal withdrawal from membership of a federation or body, especially a political state.

loyalist-a person who remains loyal to the established ruler or government, especially in the face of a revolt.

This text suggests a means of assessment for the program.

Students will be assessed in the following categories:

Script – the group’s script shows a coherent and cohesive tying together of the required elements; all elements are addressed. (10 points)

Oral presentation – the oral presentation of the material covers all bullet points above, incorporates the visuals, and involves all members of the group in near-equal fashion. (40 points)

Visual presentation – all three visuals are present and show the information required; PowerPoints and movies are coherent and engaging. (30 points – 10 for each element)

Bibliography – bibliographies contain at least three credible sources, there is at least one primary and one secondary source, and are constructed in an acceptable format. (5 points)

Accuracy – students should make sure their information is correct by using primary sources wherever possible; bias should be pared out of the project. (5 points)

Script: submitted prior to presentation; well written in an easily understood and interesting fashion.

Accuracy: there are no mistakes present (does not refer to a flawless oral presentation, only materials)

Research:  There is some depth of research but does not quite cover all the aspects of the assignment.

Script: submitted prior to presentation; could have better writing but is understandable and somewhat interesting

Oral presentation: a bullet point may be missing, may be unbalanced towards one or more students; or ignores some of the visuals

Visual presentation: does not fully cover the requested information; PowerPoints or movie are not fully cohesive or show a lack of understanding.

Bibliography: lacks a source or there is a formatting mistake

Accuracy: there are minor errors present (does not refer to a flawless oral presentation, only materials)

Research: There is some depth of research but does not quite cover all the aspects of the assignment; a major question is left unanswered.

Script: submitted prior to presentation; could have better writing but has some minor clarity problems; somewhat interesting

Oral presentation: two bullet points may be missing, may be unbalanced towards one or more students; or ignores some of the visuals

Visual presentation: does not fully cover the requested information; PowerPoints or movie are not fully cohesive or show a lack of understanding.

Bibliography: lacks a source or there are more than one formatting mistakes.

Accuracy: there is a major error present (does not refer to a flawless oral presentation, only materials)

Research: Research does not cover all the aspects of the assignment; two major questions are left unanswered.

Script: submitted prior to presentation; writing has some major clarity problems; doubtful it caught the interest of other students.

Oral presentation: three bullet points may be missing, showed domination by one students; ignores major arts of the visuals

Accuracy: there are two major errors present (does not refer to a flawless oral presentation, only materials)

Research: Research does not cover all the aspects of the assignment; three or more major questions are left unanswered.

Script: was not submitted prior to presentation; major clarity problems; doubtful it caught the interest of other students; has grammatical and spelling errors present.

Oral presentation: three bullet points may be missing, some students in the group did not participate in the presentation; ignores the visuals.

Visual presentation: poorly constructed (messy, vague labels, etc.); does not fully cover the requested information; PowerPoints or movie are not fully cohesive or show a lack of understanding.

Accuracy: there are multiple (three or more) major errors present (does not refer to a flawless oral presentation, only materials)

One extension activity would be having the students research and wear tribal dress when they are giving their presentation.

Another would be to create a full-sized replicas of guidons, flags, etc,. that were used by the Native American units.

Students on each side of the issue could create a fourth visual listing the Native American tribes outside of the Five Civilized Tribes would supported the Union and Confederacy.

Abel, Annie Heloise; The American Indian in the Civil War; ©1992 by the University of Nebraska Press, Lincoln, Nebraska.

Britton, Wiley (Author Civil War on the Border, 2 Volumes); “Some Reminiscences of the Cherokee People Returning to Their Homes the Exiles of a Nation;” Chronicles of Oklahoma, Vol. 6 No 2, June, 1928.

Edwards, Whit; The Prairie Was On Fire;

Hatch, Thom; The Blue, The Grey, and the Red

Hauptman, Laurence M.; Between Two Fires: Indians In The Civil War; © 1995, The Free Press, a division of Simon&Schuster, New York.