Neither Cold Nor A Harbor: Archeology and a Civil War Soldier’s Experience at the Battle of Cold Harbor 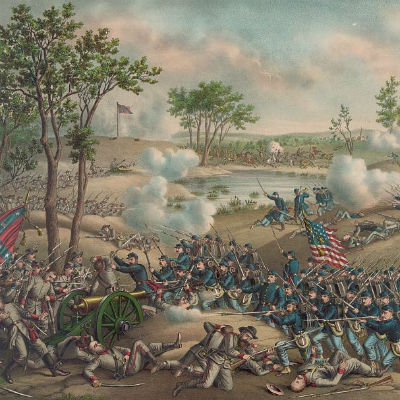 Grade Level:
Middle School: Sixth Grade through Eighth Grade
Subject:
Literacy and Language Arts,Science,Social Studies
Lesson Duration:
90 Minutes
Common Core Standards:
6-8.RH.7, 6-8.RH.9
Thinking Skills:
Understanding: Understand the main idea of material heard, viewed, or read. Interpret or summarize the ideas in own words. Applying: Apply an abstract idea in a concrete situation to solve a problem or relate it to a prior experience. Analyzing: Break down a concept or idea into parts and show the relationships among the parts.

How can looking at an artifact and battlefield maps provide insight into the life of a soldier at Cold Harbor?

1. Learn the historical narrative of Cold Harbor.
2. Understand the conditions soldiers faced on the battlefield. Learn about the resources available to soldiers and how they adapted materials to survive.
3. Learn how archeology can be used to understand both the battle itself and the soldiers’ individual experiences.

During the Civil War (1861-1865), Union forces made capturing the Confederate capital of Richmond, Virginia their primary goal. The Peninsula Campaign of 1862 was unsuccessful. In 1864, the Overland Campaign was launched in a second attempt to seize the city. During May and June of that year, Union soldiers under Lieutenant General Ulysses S. Grant and Confederate soldiers under General Robert E. Lee fought across central Virginia as they sought to take or protect the capital.

Cold Harbor was an area of open fields, scattered houses, and a crossroads that led into Richmond. Grant meant to capture the area and move in on the city. Lee intended to stop him.

Confederate forces arrived at Cold Harbor on the night of May 31, 1864. There the soldiers found few resources and little protection. While they waited for the oncoming battle, they strung their blankets into makeshift shelters to protect them from the blazing summer sun. Not having shovels, they used whatever materials they could find such as bayonets, cups, plates, and their own hands to dig deep trenches and build earthworks that would protect them from gunfire and exploding mortar shells. They lined the tops of these mounds with stakes cut from the few available trees. This was hard work and soldiers filled their canteens with water from the nearby creek. They ate hardtack (a cracker made of flour, water, and salt) and drank coffee brewed with the creek water and the beans they carried with them.

It took two days for Union troops to assemble at the new battleground. During that time, small battles were fought yet none were decisive. By the time all of Grant’s men arrived at Cold Harbor on June 2, many were exhausted from an all-night march and were in no shape to fight. Needing all the strength his army could supply, Grant decided to postpone the attack on the Confederate forces until the next day. His decision had a huge impact. Given an extra full day to prepare, Lee’s soldiers were able to strengthen their position even more.

As Union staff officer Colonel Theodore Lyman wrote after the war: “It is a rule that, when the Rebels halt, the first day gives them a good rifle-pit; the second, a regular infantry parapet with artillery in position; and the third a parapet with an abatis in front and entrenched batteries behind. Sometimes they put this three days’ work into the first twenty-four hours” (Lyman, 100).

The battle of Cold Harbor began on June 3, 1864 at 4:30 am. After launching an unsuccessful assault on the Confederate lines and under consistent fire, Union soldiers raced to build their own trenches and earthworks. In the end, the Confederate defenses proved too solid. This battle lasted a day but fighting continued in Cold Harbor for nearly two weeks, leaving thousands of soldiers wounded or dead.

Lyman, Col. Theodore. With Grant and Meade from the Wilderness to Appomattox. University of Nebraska Press, 1994, p. 100.

Visit the Park
Cold Habor battlefield is open for visitation. It is located about twenty minutes north of Richmond and is run by the National Park Service. A student field trip curriculum “On To Richmond!” is available on the NPS website. During this trip students visit both Cold Harbor and the nearby site of Gaines’ Mill battlefield.

Show the video, The Union Attack on June 1, with National Park Ranger and historian Michael Gorman.

Visit SketchFab to see a 3D model replica of a canteen repurposed into a shovel. Soldiers on the battlefield had to adapt to their circumstances. This object was once a tin canteen carried by a soldier at Cold Harbor. However, it was intentionally cut to be used as a shovel for digging earthworks.

Supplies
Pens or pencils and paper.

Handouts
Print out the readings, maps, and handouts in the Materials section.

Step 1: Review the Background Information with the class.

Step 2: Divide the class into small groups. Distribute the Student Worksheet and Handouts 1, 2, and 3. Teachers may choose to distribute all three handouts at once or after groups have finished each section. Students will work together to read and explore the materials, then answer questions.

Step 3: Review answers as a group.

Step 4: Display the 3D model of the canteen. Allow students to rotate and zoom in on the object.

Step 5: If time allows, have students choose one of the three activities listed in the Assessment Materials. Review their answers.

Have each student choose one activity to assess their knowledge of soldier life on the Cold Harbor Battlefield.

Activity #1: Imagine you are a soldier and must build a shelter for the night. You can only use what is in your pack and the things you find on the ground around you. Using scrap paper, describe and draw how you would accomplish this task.

Activity #2: As that soldier, write a letter home about your life in camp. Describe your surroundings and the tasks you must accomplish, such as fetching water and building earthworks.

Activity #3: Go outside and “read” your own landscape as an archeologist would. What do you see? How has the land been changed or modified? What purpose do these changes serve?

Students who wish to learn more about Cold Harbor may explore the following resources: