The War Relocation Centers of World War II: When Fear was Stronger than Justice 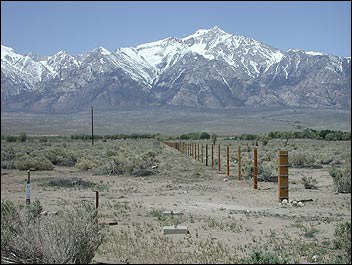 1. To analyze why people of Japanese ancestry living in the United States at the onset of World War II were removed from their homes and placed in relocation centers;
2. To examine the places where relocation centers were established;
3. To describe the characteristic features of the centers;
4. To examine the reactions of some of the residents;
5. To research the local community to see if a perceived enemy was ever unfairly treated, and, if so, how that mistreatment might be acknowledged.

Time Period: World War II
Topics: Teachers could use the lesson in an American history unit on World War II or in a social studies unit on human rights.

It all happened so quickly. The Japanese on the West Coast of the United States had made lives for themselves in spite of discrimination, but on December 7, 1941, everything changed.

To panicked people after the attack on Pearl Harbor, every Japanese could be a potential spy, ready and willing to assist in an invasion that was expected at any moment. Many political leaders, army officers, newspaper reporters, and ordinary people came to believe that everyone of Japanese ancestry, including American citizens born in the United States, needed to be removed from the West Coast.

In February 1942, President Franklin D. Roosevelt signed an executive order that moved nearly 120,000 Japanese and Japanese Americans into 10 isolated relocation centers in Arizona, Arkansas, California, Colorado, Idaho, Utah, and Wyoming. The temporary, tar paper-covered barracks, the guard towers, and most of the barbed-wire fences are gone now, but the people who spent years of their lives in the centers will never forget them.

At the time of the Japanese attack on Pearl Harbor on December 7, 1941, the West Coast of the United States already had a long tradition of anti-Chinese and anti-Japanese discrimination. The Japanese came later than the Chinese. In 1890 there were only 3,000 Japanese people in the whole United States. When Hawaii became a United States Territory in 1898, the Japanese there were free to move to the mainland. In 1900, over 12,000 arrived, mostly from Hawaii. Between 1900 and 1908, 135,000 Japanese individuals entered the country, most settling on the West Coast, especially in California. Politicians, labor leaders, and newspaper publishers campaigned to restrict further immigration into the state. Reacting to this pressure, the United States and Japan agreed in 1908 to reduce immigration ("The Gentlemen's Agreement"). In 1924, the United States prohibited Japanese immigration entirely. Immigrants already in this country (Issei, from the Japanese word for "one") were barred from citizenship, but their children (Nisei, from the word for "two"), born in the United States, were automatically citizens.

Over the years, the Japanese population in America prospered, and by the outbreak of World War II, many Japanese had left the ranks of low-paid workers to become owners or managers of farms, fishermen who owned their own boats, and operators of small stores and other businesses. Their very success brought complaints against them from agricultural interests who wanted to eliminate competition. When World War II began in the Pacific with Japan's devastating attack on Pearl Harbor, fear of an attack on the West Coast created even greater antagonism toward Japanese immigrants and their children. In 1942, fear and prejudice combined to confine nearly 120,000 people of Japanese ancestry, citizens and aliens alike, in relocation centers established by the U.S. government in remote areas west of the Mississippi River. Many would not pass through the barbed wire fences surrounding the centers until the war was over.

Minidoka Internment National Monument
Minidoka Internment National Monument, a unit of the National Park System, commemorates the hardships and sacrifices of Japanese Americans interned there during World War II. Also known as the "Hunt Camp", the Minidoka Relocation Center was a 33,000-acre site with over 600 buildings and a total population of about 13,000 internees held from Washington, Oregon, and Alaska. It was in operation from August 1942 until October 1945. Visit the park's web page to learn more about the park's history and visiting the site.

Confinement and Ethnicity
Confinement and Ethnicity: An Overview of World War II Japanese American Relocation Sites, written by Jeffery F. Burton, Mary M. Farrell, Florence B. Lord, and Richard W. Lord, is available on the NPS History web page. This award-winning study provides information on all of the War Relocation Authority assembly and relocation centers, context material, and many historic and current photographs.

Report to the President: Japanese-American Internment Sites Preservation
On November 9, 2000, President Clinton directed the Secretary of the Interior to follow up on Confinement and Ethnicity: an Overview of World War II Japanese American Relocation Sites, which describes the current condition of the War Relocation Centers and other relocation sites, by developing recommendations to preserve the existing Japanese American internment sites and to provide more opportunities for the public to learn about the internment. The recommendations are presented in the Report to the President: Japanese-American Internment Sites Preservation, which is divided into three sections:
General recommendations and proposed actions for the War Relocation Centers;
Short description and specific recommendations for each site; and
Appendices; including detailed reports about each site:

War Relocation Authority Photographs
The Bancroft Library at the University of California at Berkeley and the National Archives and Records Administration in Washington, D.C. are the primary repositories for WRA photographs. The Library has posted many of these photographs on their web page. The Japanese American Relocation Digital Archive, of which the photographs are a part, also contains other documents relating to the relocation.

Righting a Wrong & A More Perfect Union
The National Museum of American History’s exhibition Righting a Wrong: Japanese Americans during World War II traces the story from Executive Order 9066 to the Civil Liberties Act of 1988. The Smithsonian Institution web page provides a multi-media tour of an exhibit at the Museum of American History in Washington on the Japanese relocation.

Japanese American National Museum
This Los Angeles museum web page contains a useful chronology of the relocation program. It also includes two digital exhibits. The first contains letters written by young people interned in the camps. The second includes drawings by a young artist showing the assembly centers and camps where he was relocated.

Library of Congress: Built in America (HABS/HAER)
The Historic American Buildings Survey (HABS) and the Historic American Engineering Record (HAER) collections document architecture, engineering, and design in the United States through a comprehensive range of building types and engineering technologies, including sites related to Asian-Pacific American history and culture. Searches on keywords like "Japanese," "World War II," or "Manzanar" will provide information on an array of associated sites. Most of the site records have publication-quality drawings, photographs and historical data.

Ellis Island National Monument
Although Ellis Island served a multitude of purposes, it served primarily as a detention center during World War II for "alien enemies," those considered to be inadmissible, and others. By 1946, approximately 7000 German, Italian, and Japanese people (aliens and citizens) were detained at Ellis Island during the War. For more information, please visit the park's website.

For Further Reading
Students and teachers interested in learning more about the relocation centers might want to look at the following books. Farewell to Manzanar, by Jeanne Wakatsuki Houston and James D. and James B. Houston (New York: Houghton Mifflin, 2002) is a powerful autobiographical account of the experiences of a seven-year old girl evacuated to Manzanar with her family. A Historical Reader: Japanese-American Internment (Evanston, IL: McDougal Littell, 2000) includes a series of essays, primary source materials, and first hand accounts. Behind Barbed Wire: The Imprisonment of Japanese-Americans During World War II (New York: Dutton, 1982) and Nisei Regiment by R. Conrad Stein (Chicago: Children's Press, 1985) are interesting non-fiction books written for young people. For information on the treatment of others categorized as "enemy aliens" during World War II, see Arnold Krammer, Undue Process: The Untold Story of America’s German Alien Internees (London, Boulder, CO: Rowman & Littlefield, 1997); and Stephen Fox, The Unknown Internment: An Oral History of the Relocation of Italian Americans during World War II (Boston: Twayne, 1990).