The Battle of Oriskany: "Blood Shed a Stream Running Down" 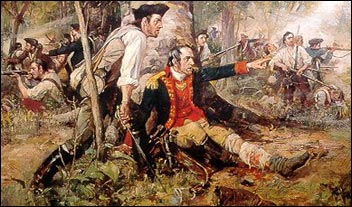 Grade Level:
Middle School: Sixth Grade through Eighth Grade
Subject:
Literacy and Language Arts,Social Studies
Lesson Duration:
90 Minutes
Common Core Standards:
6-8.RH.2, 6-8.RH.3, 6-8.RH.4, 6-8.RH.5, 6-8.RH.6, 6-8.RH.7, 6-8.RH.8, 6-8.RH.9, 6-8.RH.10, 9-10.RH.1, 9-10.RH.2, 9-10.RH.3, 9-10.RH.4, 9-10.RH.5, 9-10.RH.6, 9-10.RH.7, 9-10.RH.8, 9-10.RH.9, 9-10.RH.10
Additional Standards:
US History Era 3 Standard 2C: The student understands the Revolution's effects on different social groups.
Curriculum Standards for Social Studies from the National Council for the Social Studies
Thinking Skills:
Remembering: Recalling or recognizing information ideas, and principles. Understanding: Understand the main idea of material heard, viewed, or read. Interpret or summarize the ideas in own words. Applying: Apply an abstract idea in a concrete situation to solve a problem or relate it to a prior experience. Analyzing: Break down a concept or idea into parts and show the relationships among the parts. Creating: Bring together parts (elements, compounds) of knowledge to form a whole and build relationships for NEW situations. Evaluating: Make informed judgements about the value of ideas or materials. Use standards and criteria to support opinions and views.

What were the consequences of the the Battle of Oriskany for both European Americans and American Indians?

1. To evaluate the decisions several New Yorkers made about which side to support during the Revolutionary War.
2. To analyze the Battle of Oriskany to determine whether the Tories or the Rebels won the battle.
3. To determine what effects the Battle of Oriskany had on the American Revolution as a whole and on the subsequent history of the region.
4. To apply the historic lessons of Oriskany and Central New York to contemporary issues in their own community.

Time Period: Late 18th century
Topics: The lesson could be used in US history, social studies, and geography courses in units on the Revolutionary War and American Indian history. It also could be used in courses on conflict resolution, cultural diversity, and art.

"That the late Incursions of the Enemy & their Savages into the said county [Tryon], & upon a part of the County of Albany have reduced the Inhabitants to the utmost distress. The Harvests not yet gathered in are rotting upon the ground. The Grass uncut. The fallow Grounds not yet ploughed. The Cattle in a great measure destroyed."¹

For hundreds of years, central and western New York had been inhabited by the six member nations of the Iroquois Confederacy. During the colonial period the French, the Dutch, and the British coveted its strategic location along an important fur trade route. The Mohawk Valley's rich farmland also yielded great quantities of food, and the land attracted European settlers. By the time of the Revolutionary War, Dutch, German, Irish, Scotch, and British settlers prospered from lucrative trade and productive farms.

Yet the whole area suffered from long-established prejudices and hatred between groups and individuals. When war broke out, European Americans and American Indians fought each other for control of New York's political power, land, and commerce. The sentiments quoted above would be repeated time and time again as personal vendettas and reprisals escalated to bloody massacres and battles. No episode better captures the brutal civil war in the Mohawk Valley than the Battle of Oriskany on August 6, 1777, where neighbor fighting neighbor transformed a quiet ravine into a bloody slaughterhouse.

With the outbreak of hostilities in 1775, it became clear that New York was vital to military victory. If the British could defeat the Rebel forces in New York, they would control trade between the Atlantic Ocean and the Great Lakes and divide the colonies. They also would be able to feed their troops from the bounty of the Mohawk Valley, the "bread basket" of the Revolutionary War.

In 1777, the British conceived an ambitious plan for the conquest of New York. This plan called for a three prong attack into the heart of the colony with all three invading forces meeting in Albany. The first army, led by General John Burgoyne, was to invade New York moving south from Canada through the Lake Champlain–Hudson River corridor to Albany. The second force, to be commanded by General William Howe, was to move north up the Hudson River Valley from New York City to Albany. The third and final British troops, commanded by General Barry St. Leger, were to move down Lake Ontario from Canada to Oswego, New York and hook eastward through the Mohawk Valley towards Albany.

This plan was dependent on coordination between the armies and the anticipated rallying to arms of the large Tory population the British believed existed in New York. Rebel leaders in New York prepared to defend the state and reinforced the Mohawk Valley. At the ravine of Oriskany in August 1777, the two sides clashed for control of New York

Lighting Freedom's Flame: American Revolution Web Page
The National Park Service maintains it own American Revolution web page, which provides a listing of the park units with connections to the Revolutionary War and colonial America, information on special activities in the parks celebrating the 225th anniversary of the war, and a timeline of events in the pivotal year of the American Revolution, 1777.

Colonial Albany Social History Project
This website includes information on the leaders and common people of Albany at the eve of the Revolutionary War. It contains biographical information about Tories and Rebels, and transcriptions of documents such as the Sons of Liberty Constitution.

The Oneida Nation
The Oneida Indian Nation's website includes a Culture and History segment that examines the role of individual Oneidas, such as George Washington's cook, Polly Cooper, and the tribe as a whole during the American Revolution. Also included on the site is information on the Oneidas' role in the Battle of Oriskany.