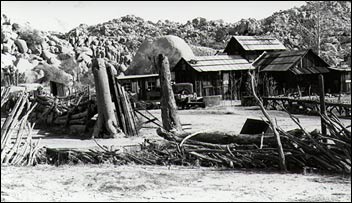 1. To examine the lifestyle of a family who chose to homestead in the California desert;
2. To describe how the Keys family both adapted to and shaped their desert environment;
3. To consider Ralph Waldo Emerson's description of self-reliance and describe how it relates to the life of Bill Keys;
4. To discover the history of settlement in their own region and determine how settlers' experiences may have compared to the experiences of Bill Keys.

Time Period: 1910s - 1960s
Topics: The lesson could be used in U.S. history, social studies, and geography courses in units on western expansion and settlement, or desert environments. It also could be used in an American Literature course in a unit on the writings of Ralph Waldo Emerson, particularly his concept of self-reliance. The lesson will help students understand why desert regions were among the last areas settled under the Homestead Act and how settlers in these places survived in a remote environment.

In the high desert of California, flesh-colored boulders rise up out of the stark landscape and embrace a small valley where Keys Ranch stands. Strangely shaped trees cast long shadows on the sides of the simple wooden ranch structures. Animal tracks in the sand tell of the previous night's adventures when scorpions, kangaroo rats, snakes, and bobcats battled for survival. This seemingly hostile desert environment was settled much later than other more productive areas of the West. Yet it was here, in 1917, that Bill Keys chose to establish a ranch and raise a family. Keys and other 20th-century homesteaders lived much as earlier pioneers in the West had, working hard to make their marginal land holdings successful. Today, Keys Ranch is preserved as part of Joshua Tree National Park.

By the mid-1840s, the phrase "manifest destiny" had been coined to describe the notion that Americans must expand throughout the North American continent. During that decade, some quarter-million Americans trekked to Oregon and California. The West became a symbol of prosperity, adventure, and independence. In 1862 Congress passed the Homestead Act, which provided western land to people with the ambition to move and build new lives. By 1900, approximately 400,000 families had claimed land under the provisions of the Act.

Desert areas in California, Nevada, Utah, Colorado, and Arizona were among the last places homesteaders settled. Those who chose the marginal lands of these desert areas lived an "old-fashioned" lifestyle while many of the previously settled places were becoming urbanized. Over time, however, hard work and determination turned some small desert farms into large, successful ranches. From 1917 until 1969, homesteader Bill Keys lived on one such ranch in the Mojave Desert near Twentynine Palms, California. Keys and his family are particularly representative of the hard work and ingenuity it took to settle and prosper in the Mojave Desert. The family's home, known as Keys Ranch, today is located within the boundaries of Joshua Tree National Park.

Library of Congress: American Memory Collection
Search the American Life Histories: Manuscripts from the Federal Writer's Project to explore the life histories of numerous homesteaders interviewed by workers from the Works Progress Administration.

United States Geological Survey (USGS) Deserts: Geology and Resources
This USGS publication explores the desert environment as a functioning ecosystem. Learn about the various environmental influences that factored into the development of Keys Ranch.