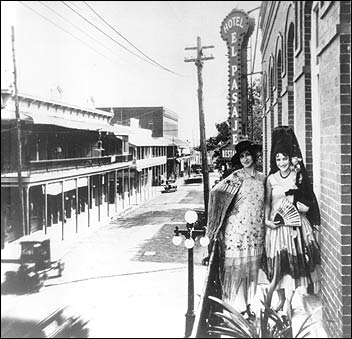 This lesson provides a case study of an immigrant community of the late 19th and early 20th centuries and offers a contrast to the typical textbook coverage that emphasizes immigration from eastern and southern Europe to the big cities of the north.

1. To identify the role cigar making played in the creation of Ybor City;
2. To explain the cigar manufacturing process;
3. To describe the mutual aid societies that helped immigrants maintain their ethnic identity;
4. To explain the efforts of José Martí to involve Cuban immigrants in Ybor City in the Cuban rebellion against Spain;
5. To investigate the history of their own community and compare it with Ybor City.

Time Period: 1860s-1920s
Topics: This lesson provides a case study of an immigrant community of the late 19th and early 20th centuries and offers a contrast to the typical textbook coverage that emphasizes immigration from eastern and southern Europe to the big cities of the north.

Walk down Seventh Avenue in Ybor City (now a section of Tampa, Florida) and feel yourself transported to a place in another time. Brick streets are lined with sidewalks of hexagonal concrete pavers and old-fashioned, cast-iron street lamps. Buildings present ornate porticos, decorative brickwork, handmade wrought-iron balconies, and ornamental tile work. A few small, plain workers' cottages, once home to Ybor City's cigar workers, have been preserved. Mutual aid society clubhouses indicate the importance of benevolent organizations to Ybor City's immigrant population. On a quiet corner lies a small park dedicated to Cuban poet and revolutionary José Martí. The park is a reminder of Martí's efforts to gain support for the cause of Cuban freedom in the 1890s. These historic sites speak of Ybor City's intriguing past.

American Indians introduced tobacco to the Spanish, who in turn introduced it to the rest of Europe in the second half of the 16th century. It was not until the early to mid-19th century, however, that cigar smoking became popular. Cigars made in Havana, Cuba, from Cuban-grown tobacco became the standard of quality, and American, as well as European, markets made Cuba prosperous. In 1857, in an attempt to raise revenue, the United States put a high tariff, or tax, on Cuban cigars. Many cigar factory owners in Cuba continued to flourish despite these new taxes because increasing numbers of Americans began to smoke cigars, and "clear Havana" cigars were the best. To escape the costs of paying the tariff, some Cuban cigar factory owners moved their factories to Florida, New York, and other parts of the United States. They also prospered because their cigars continued to be made by Cuban workers from tobacco leaves imported from Cuba. Vicente Martinez Ybor was one of the cigar factory owners who moved his operations to Key West, Florida. In 1885 he relocated yet again, to an area two miles northeast of Tampa. This area, known as Ybor City, became part of Tampa in 1887.

L'Unione Italiana
The L'Unione Italiana web page provides a unique perspective on the historic club and how it functioned in the Italian immigrant society in the past as well as today.

Historical Museum of Southern Florida
The Historical Museum of Southern Florida provides a detailed account of the Spanish-American War including "Cuba Libre," the struggle for Cuba's independence. The web page offers information on José Martí, American involvement in the war, as well as the Cuban immigrant effort to support the cause from abroad.

Library of Congress
The Library of Congress Spanish-American War Home Page provides resources and documents about the Spanish-American War, the period before the war, and some of the people who participated in the fighting or commented about it. Information about Cuba, Guam, the Philippines, Puerto Rico, Spain, and the United States is provided in chronologies, bibliographies, and a variety of pictorial and textual material from bilingual sources.