Carnegie Libraries: The Future Made Bright 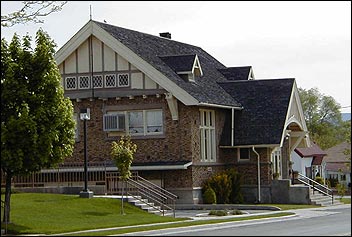 Grade Level:
Middle School: Sixth Grade through Eighth Grade
Subject:
Literacy and Language Arts,Social Studies
Lesson Duration:
90 Minutes
Common Core Standards:
6-8.RH.2, 6-8.RH.3, 6-8.RH.4, 6-8.RH.5, 6-8.RH.6, 6-8.RH.7, 6-8.RH.8, 6-8.RH.9, 6-8.RH.10, 9-10.RH.1, 9-10.RH.2, 9-10.RH.3, 9-10.RH.4, 9-10.RH.5, 9-10.RH.6, 9-10.RH.7, 9-10.RH.8, 9-10.RH.9, 9-10.RH.10
Additional Standards:
US History Era 6 Standard 1A: The student understands the connections among industrialization, the advent of the modern corporation, and material well-being.
Curriculum Standards for Social Studies from the National Council for the Social Studies
Thinking Skills:
Remembering: Recalling or recognizing information ideas, and principles. Understanding: Understand the main idea of material heard, viewed, or read. Interpret or summarize the ideas in own words. Applying: Apply an abstract idea in a concrete situation to solve a problem or relate it to a prior experience. Analyzing: Break down a concept or idea into parts and show the relationships among the parts. Creating: Bring together parts (elements, compounds) of knowledge to form a whole and build relationships for NEW situations. Evaluating: Make informed judgements about the value of ideas or materials. Use standards and criteria to support opinions and views.

Discover how and why industrialist and philanthropist Andrew Carnegie chose libraries to be among his greatest benefactions to the U.S., and assess the impact of libraries on American society.

1. To understand how Andrew Carnegie epitomized the American dream of "rags to riches;”
2. To explain why Carnegie chose libraries to be among his first and foremost benefactions;
3. To examine the impact of libraries in America and how they reflect the values of the society they serve;
4. To explain the effects of philanthropy on the United States;
5. To determine how their own community libraries are being supported and how they were supported in the past.

Time Period: Late 19th century to early 20th century
Topics: The lesson could be used in units on American social history between 1865 and 1919, particularly the widespread efforts of reform. Students will better understand the role of philanthropy in U.S. history and the place of libraries in American culture.

Many Americans first entered the worlds of information and imagination offered by reading when they walked through the front doors of a Carnegie library. One of 19th-century industrialist Andrew Carnegie’s many philanthropies, these libraries entertained and educated millions. Between 1886 and 1919, Carnegie’s donations of more than $40 million paid for 1,679 new library buildings in communities large and small across America. Many still serve as civic centers, continuing in their original roles or fulfilling new ones as museums, offices, or restaurants.

The patron of these libraries stands out in the history of philanthropy. Carnegie was exceptional in part because of the scale of his contributions. He gave away $350 million, nearly 90 percent of the fortune he accumulated through the railroad and steel industries. Carnegie was also unusual because he supported such a variety of charities. His philanthropies included a Simplified Spelling Board, a fund that built 7,000 church organs, the Carnegie Institute in Pittsburgh, the Carnegie Foundation for the Advancement of Teaching, and the Carnegie Endowment for Peace. Carnegie also stood out because some questioned his motivations for constructing libraries and criticized the methods he used to make the fortune that supported his gifts.

Libraries arrived on the North American continent with the first European settlers. Religious books, primarily for the use of the clergy, formed the center of most 17th-century collections. The richest colonial merchants and planters often developed their own libraries, but the number of people regularly reading books, other than the Bible, was quite small.

Books became available to a broader public as the 18th century progressed. Improvements in printing methods lowered their cost, making them affordable to more people. Increased interest in commerce, science, and art spurred a demand for more information--a demand that was often best satisfied through reading. Colonists began to form social libraries in which individuals contributed money to purchase books. Library societies sprang up in urban centers; outstanding examples include those still existing in Philadelphia, Pennsylvania, Charleston, South Carolina, and New York, New York. However, such societies generally only lent their books to those who had donated money.

Libraries continued to develop after the Revolutionary War. Women, for example, created their own collections, with books often circulating great distances among farms and plantations. Between 1815 and 1850, library societies increasingly concentrated on specialized subjects. Mercantile libraries held books of interest to clerks and businessmen, while the collections of mechanics’ and seamen’s libraries specialized in their particular trades. These libraries were supported by business owners and provided educational and social opportunities for young men.

During the second half of the 19th century the "free" library movement--that is, open to the public at no charge--began to spread. Reformers saw libraries as a valuable tool in their attempts to repair what they saw as the flaws in a rapidly industrializing nation. More directly, libraries provided information about an increasingly complicated and technical world. Reformers believed libraries could teach millions of immigrants how to succeed in America, and provide the poor with the knowledge they needed to rise in society. Also, reformers thought well-educated voters would be better able to resist the lure of dishonest politicians. Finally, libraries offered an alternative to unwholesome pursuits such as drinking and gambling.

Making libraries a tool for reform, however, proved difficult. Lack of money, insufficient book collections, and limited memberships prevented social libraries from expanding as fast as the American population. America’s rapidly growing towns and cities demanded many services, such as better transportation, sanitation, and schools. Buying books and building libraries were, for most citizens, a lower priority.

Even though a relatively small number of places had developed public libraries before the 1880s, enough progress had occurred to give supporters hope. Cities gradually gained the right to tax, which held the potential to supply funds. The growth in public schools indicated an increasing interest in education. It was at this point that the generosity of Andrew Carnegie accelerated the development of American libraries. His donations provided communities across the country with millions of dollars to build new libraries.

Library of Congress
Visit the Digital Collections website to search for historical, architectural, and photographic documents on Carnegie libraries as well as Andrew Carnegie. Also search for information on industrialization and labor unions in America.

Steel Industry Heritage Corporation
To better understand southwestern Pennsylvania's role in the modern industrial epic, visit the Steel Industry Heritage Corporation website. Included on the site is a compilation of different sources that examine what propelled our nation to world leadership as an industrial giant. Also discussed is the turmoil surrounding the rise of industrialization including a description of the Homestead Strike of 1892.

Andrew Carnegie and The American Experience
PBS and American Experience produced numerous documentary films on the life of Andrew Carnegie: "America 1900," "The Richest Man in the World," and "Philanthropy 101," among others. Also included are documentaries touring the Carnegie Mansion and the mansion of his partner, Henry Clay Frick. The PBS website provides a synopsis of the films, further readings, as well numerous resources for teachers. To find all the films on Andrew Carnegie, search on Carnegie. For a listing of all programs, click on programs A-Z.