The Liberty Bell: From Obscurity to Icon 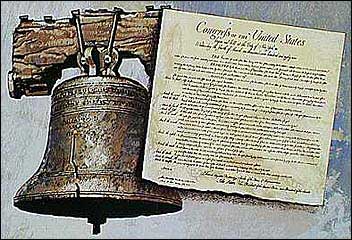 Grade Level:
Middle School: Sixth Grade through Eighth Grade
Subject:
Literacy and Language Arts,Social Studies
Lesson Duration:
90 Minutes
Common Core Standards:
6-8.RH.2, 6-8.RH.3, 6-8.RH.4, 6-8.RH.5, 6-8.RH.6, 6-8.RH.7, 6-8.RH.8, 6-8.RH.9, 6-8.RH.10, 9-10.RH.1, 9-10.RH.2, 9-10.RH.3, 9-10.RH.4, 9-10.RH.5, 9-10.RH.6, 9-10.RH.7, 9-10.RH.8, 9-10.RH.9, 9-10.RH.10
Additional Standards:
US History Era 4 Standard 4C: The student understands changing gender roles and the ideas and activities of women reformers.
Curriculum Standards for Social Studies from the National Council for the Social Studies
Thinking Skills:
Remembering: Recalling or recognizing information ideas, and principles. Understanding: Understand the main idea of material heard, viewed, or read. Interpret or summarize the ideas in own words. Applying: Apply an abstract idea in a concrete situation to solve a problem or relate it to a prior experience. Analyzing: Break down a concept or idea into parts and show the relationships among the parts. Creating: Bring together parts (elements, compounds) of knowledge to form a whole and build relationships for NEW situations. Evaluating: Make informed judgements about the value of ideas or materials. Use standards and criteria to support opinions and views.

What values and ideals does the Liberty Bell represent?

1. To analyze the historical and cultural influences that shaped the symbolic meaning of the Liberty Bell;
2. To critically evaluate the reliability of particular sources as a way of determining historical accuracy;
3. To determine from the historical record how popular ideas about the past are shaped and changed by current events;
4. To research the way patriotic symbols are used in their own communities as well as the nation.

Time Period: Late 18th century, 19th century, early 20th century
Topics: The lesson could be used in units on 18th- and 19th-century American history and in civics and government courses. Students will practice their skills of evaluating the accuracy of historical sources, and of observation, analysis, and interpretation related to history, geography, and the social sciences.

Residents of Philadelphia in 1776 would not have been able to direct a visitor to the "Liberty Bell." It was there--ringing out from the tower of the Pennsylvania State House--but it had yet to be transformed into an international symbol of liberty. By the time the grandchildren of those early Philadelphians were grandparents themselves, however, they could easily have directed a visitor to the site of the famous Liberty Bell. It was still housed at the old State House, but by then the building had been renamed Independence Hall.

Shaped by national and world events, the power of the 2,000-pound Liberty Bell’s message grows in strength: a wreath is laid beneath the bell to commemorate the Thirteenth Amendment, which made slavery illegal in the United States; a crowd gathers outside the Liberty Bell Pavilion for a candlelight vigil to exercise their First Amendment right to disagree with their government; and tourists from all over the world come to see this international symbol of freedom.

In the 18th century, citizens across the colonies depended on bells to communicate important news. Bells might call them to put out fires, notify them of an approaching merchant ship, warn them about a possible attack by Indians or enemy soldiers, or tell them to gather to hear news important to the community. From the start, the bell that would become known as the Liberty Bell rang out for larger, more national purposes. Originally, it was commissioned for the Pennsylvania State House, which was built between 1732 and 1756. It knelled to mark the death of monarchs and pealed for the coronation of George III. It was muffled to toll the Stamp Act and was rung joyously when that act was repealed. It was probably rung on July 8, 1776, to gather Philadelphians to hear the first public reading of the Declaration of Independence.

Some basic information about the Liberty Bell is found on the bell itself. On the waist is the inscription "PASS AND STOW"—the last names of the founders who cast the bell. Under the founders’ names are the letters "PHILADA" (an abbreviation for Philadelphia) and the numbers "MDCCLIII" (1753), the year the bell was made. The inscription encircling the top of the bell reads: "BY ORDER OF THE ASSEMBLY OF THE PROVINCE OF PENSYLVANIA [sic] FOR THE STATE HOUSE IN PHILADA." It is often incorrectly noted that there is a misspelling on the Liberty Bell. In the 18th century, spelling was not standardized and it was acceptable to spell Pennsylvania with one "n," or in a number of other ways. The copy of the letter written by the Speaker of the Pennsylvania Assembly specifying the bell’s inscription spells Pennsylvania with only one "n."

The top line of the inscription is a verse from the Bible, Leviticus chapter 25, verse 10: "PROCLAIM LIBERTY THROUGHOUT ALL THE LAND UNTO ALL THE INHABITANTS THEREOF LEV. XXV X," and it was this inscription that fostered the transformation of the old State House bell into the Liberty Bell.

First called the "Liberty Bell" by abolitionist publications in the 1830s, the bell thereafter was adopted as a symbol to promote a wide variety of causes, from women’s rights to civil rights, to protests against political oppression.

National Register of Historic Places: We Shall Overcome
To learn more about the Civil Rights Movement visit We Shall Overcome. This travel itinerary provides a detailed history of the movement and the national historic sites associated with civil rights.