Thaw in the Cold War: Eisenhower and Khrushchev at Gettysburg 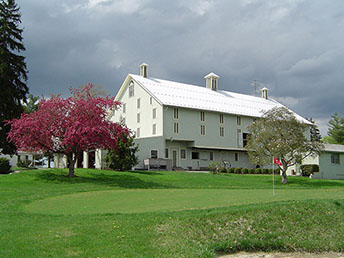 Grade Level:
Middle School: Sixth Grade through Eighth Grade
Subject:
Literacy and Language Arts,Social Studies
Lesson Duration:
90 Minutes
Common Core Standards:
6-8.RH.2, 6-8.RH.3, 6-8.RH.4, 6-8.RH.5, 6-8.RH.6, 6-8.RH.7, 6-8.RH.8, 6-8.RH.9, 6-8.RH.10, 9-10.RH.1, 9-10.RH.2, 9-10.RH.3, 9-10.RH.4, 9-10.RH.5, 9-10.RH.6, 9-10.RH.7, 9-10.RH.8, 9-10.RH.9, 9-10.RH.10
Additional Standards:
US History Era 9 Standard 2A: The student understands the international origins and domestic consequences of the Cold War.
Curriculum Standards for Social Studies from the National Council for the Social Studies
Thinking Skills:
Remembering: Recalling or recognizing information ideas, and principles. Understanding: Understand the main idea of material heard, viewed, or read. Interpret or summarize the ideas in own words. Applying: Apply an abstract idea in a concrete situation to solve a problem or relate it to a prior experience. Analyzing: Break down a concept or idea into parts and show the relationships among the parts. Creating: Bring together parts (elements, compounds) of knowledge to form a whole and build relationships for NEW situations. Evaluating: Make informed judgements about the value of ideas or materials. Use standards and criteria to support opinions and views.

How did the notion of a "superpower" develop in foreign relations?

1. To define and describe the Cold War;
2. To explain Eisenhower's personal style of diplomacy and how he used it effectively during the Cold War;
3. To describe the role Eisenhower's Gettysburg farm played in easing Cold War tensions;
4. To analyze and evaluate public papers and transcripts of presidential news conferences;
5. To investigate the impact of the Cold War period on their own community.

Time Period: 1950s
Topics: The lesson could be used in American history units on the Cold War, or in government and world affairs courses for units on negotiation and conflict resolution. Students will sharpen their skills in using primary documents and in interpreting maps and visual data.

Perhaps a change of scene would make a difference. Dwight D. Eisenhower and Nikita Khrushchev, opposing leaders of the United States (U.S.) and the Union of Soviet Socialist Republics (USSR) at the height of the Cold War in 1959, had reached an impasse. Even at the informal setting of Camp David, with occasional escapes from the intrusive protocol and ever present advisers, the leaders were making little progress in their effort to lessen the tensions. As he and Khrushchev boarded the helicopter for the short flight from Camp David to the president's Gettysburg, Pennsylvania farm, Eisenhower hoped that the quiet, rural atmosphere would have the intended effect on Khrushchev.

Eisenhower always found the farm "an oasis of relaxation." He and his wife, Mamie, purchased the farm in 1950; it was the only home the Eisenhowers ever owned. Though originally intended as a retirement home, it also served as a weekend retreat after Eisenhower's 1952 election to the presidency. The Eisenhowers especially enjoyed the glassed-in porch where they entertained family and friends, played cards, read, and watched television. Eisenhower also pursued his hobby of oil painting on the porch. He once wrote that if they ever built another home "it would be built around such a porch." On adjoining farms, Eisenhower raised his prize-winning herd of Angus cattle.

Sharing this private side of his life with world leaders had proved beneficial for Eisenhower when he met with allies of the United States, including West German Chancellor Konrad Adenauer and British Prime Minister Harold Macmillan. But would it work, he wondered, with his Cold War adversary? As they landed at the edge of the farm field in front of his home, he hoped this private meeting with Khrushchev would move the world toward peace.

Under Soviet-style communism, the rights of the individual were always secondary to the intentions and needs of the state. Farms and factories were owned by the government. The government chose what was shown on television, printed in newspapers, or taught in schools. To speak out against the government was to risk going to prison. Soviet leaders argued that their dictatorship of the proletariat was the wave of the future. Once the whole world became communist, there would be no cause for war. But until that time they saw themselves in permanent conflict with the democracies of Europe and America. The United States, with its constitutional guarantees of individual rights, was widely recognized as the leader of the Western democracies, and was the natural and inevitable enemy of communism.

The Cold War began at the end of World War II when the Soviet Union attempted to create its own "sphere of influence" by refusing to remove its troops from Eastern Europe. It was a war of mutual propaganda, espionage, and encroachment on neutral territory. Each side used spies to steal the other's military secrets. Covertly, both countries helped smaller nations in their fights for or against communism by supplying them with weapons and economic aid.

What made the Cold War so frightening was the very strong possibility that it could turn into a "hot" war--nuclear war--at any moment. By 1953 both the United States and Soviet Union had produced nuclear weapons. To allay both countries' fears, Eisenhower proposed in 1955 an Open Skies plan of mutual overflights. The plan was flatly denounced by Nikita Khrushchev, the new leader of the Soviet Union, who, in 1958, further heightened Cold War tensions by issuing the Berlin Ultimatum. He insisted that if the United States and its Western European allies would not recognize East Germany as a separate nation, he would deny them access to Berlin.

Eisenhower NHS
The Eisenhower National Historic Site is a unit of the National Park System. The park's web pages provide resources for educators and a video tour.

National Park Service - Museum Management Program
American Presidents & First Ladies: Dwight D. Eisenhower and Mamie Eisenhower is an online multi-media exhibit that explores multiple facets of Eisenhower's presidency, the trend-setting style of First Lady Mamie, and gives visitors an intimate view of the Eisenhowers in their comfortable home, with their family and friends, and a look at Ike's successful cattle operation at Eisenhower Farms in Gettysburg, PA. The Museum Management Program also has two lesson plans focused on the Eisenhowers in their Teaching with Museum Collections series: Eisenhower's Presidency and The Eisenhower Farm: Leaving the Land Better Than He Found It!

Biographies of President Eisenhower
The following include:

National Archives (NARA)
The National Archives maintains the Dwight D. Eisenhower Presidential Library. In addition, the Archives has placed on its web site a large number of items about Eisenhower and his presidency. To find them, visit the NARA search engine.