First Lady of the World: Eleanor Roosevelt at Val-Kill 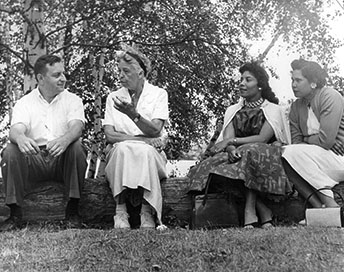 Grade Level:
Middle School: Sixth Grade through Eighth Grade
Subject:
Literacy and Language Arts,Social Studies
Lesson Duration:
90 Minutes
Common Core Standards:
6-8.RH.2, 6-8.RH.3, 6-8.RH.4, 6-8.RH.5, 6-8.RH.6, 6-8.RH.7, 6-8.RH.8, 6-8.RH.9, 6-8.RH.10, 9-10.RH.1, 9-10.RH.2, 9-10.RH.3, 9-10.RH.4, 9-10.RH.5, 9-10.RH.6, 9-10.RH.7, 9-10.RH.8, 9-10.RH.9, 9-10.RH.10
Additional Standards:
US History Era 8 Standard 2B: The student understands United States foreign policy in Africa, Asia, the Middle East, and Latin America.
Curriculum Standards for Social Studies from the National Council for the Social Studies.
Thinking Skills:
Remembering: Recalling or recognizing information ideas, and principles. Understanding: Understand the main idea of material heard, viewed, or read. Interpret or summarize the ideas in own words. Applying: Apply an abstract idea in a concrete situation to solve a problem or relate it to a prior experience. Analyzing: Break down a concept or idea into parts and show the relationships among the parts. Creating: Bring together parts (elements, compounds) of knowledge to form a whole and build relationships for NEW situations. Evaluating: Make informed judgements about the value of ideas or materials. Use standards and criteria to support opinions and views.

Why is it important to have spaces for international dialogue?

1. To describe the general setting at Val-Kill and explain how it nurtured Eleanor Roosevelt's spirit, personal style, and humanitarian efforts;
2. To describe some of the people Roosevelt invited to her home and indicate how these visitors reflected her interest;
3. To examine the United Nation's Universal Declaration of Human Rights and explain Roosevelt's involvement in its creation;
4. To investigate their own community for volunteer organizations dedicated to helping others.

Time Period: 20th century
Topics: The lesson could be used in American history courses in units on efforts to achieve world peace during the Cold War in the 1950s, or on human rights and civil rights issues. Students will learn about Eleanor Roosevelt's contributions as a humanitarian.

"My Missus and some of her female political friends want to build a shack on a stream in the back woods and want, instead of a beautiful marble bath, to have the stream dug out so as to form an old-fashioned swimming hole."

This is how Franklin D. Roosevelt described his wife Eleanor's ambition to build a retreat for herself and her friends away from the big family house at Hyde Park, New York. The "shack," built in 1925 near a gently flowing stream, was actually a stone cottage situated on land FDR offered the women for their lifetime use.

The following year, the women had a second building constructed on the site to house a small furniture factory. After the factory closed in 1936, Roosevelt converted the building into a cottage for herself, her secretary, and guests, and christened it "Val-Kill Cottage." She used the cottage only sparingly until the death of FDR in 1945. Then, she moved permanently to Val-Kill. She had once described Val-Kill as the place "where I used to find myself and grow" and where "I emerged as an individual." It was truly her home and the place where she came into her own. She gained strength and inspiration from the pastoral surroundings.

Anna Eleanor Roosevelt was born in New York on October 11, 1884 to a wealthy family. After attending school in England as a teenager, Roosevelt returned home to New York where she began working with the city's poor immigrants. In 1905 she married her distant cousin Franklin D. Roosevelt, a well-connected Columbia University Law School student. In 1921 FDR, who had already served as a New York state senator and assistant secretary of the navy under President Woodrow Wilson, contracted polio. Eleanor Roosevelt began to engage in a more public life, making speeches and official appearances for the Democratic Party so that her husband's name would not be forgotten. She became her husband's "eyes, ears and legs" as she campaigned for him. Discovering that she had a liking for politics herself, Roosevelt began working enthusiastically for women's rights and other progressive causes.

After FDR became president in 1933, he announced a "New Deal" for America. Eleanor Roosevelt toured the country extensively and gathered information used to formulate plans to combat the Great Depression. She conveyed her accounts of the conditions she witnessed and urged immediate action for relief. Before that work was completed, however, World War II began. The First Lady supported the war effort vigorously, spending much of her time visiting the wounded in hospitals at home and overseas.

After her husband's death in 1945, Roosevelt was appointed as United States delegate to the United Nations, where she became an outspoken advocate for its Declaration of Human Rights. She continued her widely-syndicated newspaper column "My Day" that she had begun writing in 1936, and which served as a diary open to the American public. She campaigned for Democratic presidential candidates Adlai Stevenson and John F. Kennedy and continued her travels abroad. She visited many world leaders and entertained many at Val-Kill, her home in Hyde Park, New York. In her lifelong pursuit of humanitarian ideals, Eleanor Roosevelt would earn the title "First Lady of the World," a label bestowed on her by President Harry S. Truman.

National Park Service - Museum Management Program
Eleanor Roosevelt: American Visionary is an online exhibit exploring the life of one the most dynamic, broadly effective, and controversial First Ladies in American history. The Museum Management Program also has a lesson plan focused on Eleanor Roosevelt: A Few of Eleanor's Favorite Things: Learning about History by Looking at Objects.