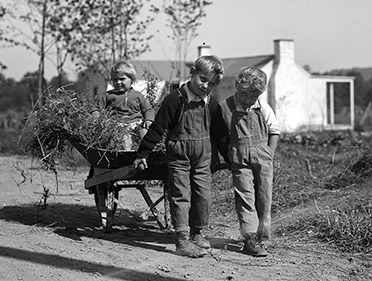 Grade Level:
Middle School: Sixth Grade through Eighth Grade
Subject:
Literacy and Language Arts,Social Studies
Lesson Duration:
90 Minutes
Common Core Standards:
6-8.RH.2, 6-8.RH.3, 6-8.RH.4, 6-8.RH.5, 6-8.RH.6, 6-8.RH.7, 6-8.RH.8, 6-8.RH.9, 6-8.RH.10, 9-10.RH.1, 9-10.RH.2, 9-10.RH.3, 9-10.RH.4, 9-10.RH.5, 9-10.RH.6, 9-10.RH.7, 9-10.RH.8, 9-10.RH.9, 9-10.RH.10
Additional Standards:
US History Era 8 Standard 2A: The student understands the New Deal and the presidency of Franklin D. Roosevelt.
Curriculum Standards for Social Studies from the National Council for the Social Studies
Thinking Skills:
Remembering: Recalling or recognizing information ideas, and principles. Understanding: Understand the main idea of material heard, viewed, or read. Interpret or summarize the ideas in own words. Applying: Apply an abstract idea in a concrete situation to solve a problem or relate it to a prior experience. Analyzing: Break down a concept or idea into parts and show the relationships among the parts. Creating: Bring together parts (elements, compounds) of knowledge to form a whole and build relationships for NEW situations. Evaluating: Make informed judgements about the value of ideas or materials. Use standards and criteria to support opinions and views.

What is the role of government in community planning?

1. To explain the goals of the New Deal and its Homestead Project;
2. To describe the conditions Scotts Run families faced during the Great Depression;
3. To argue whether Arthurdale was a failure or a success;
4. To report on New Deal projects or programs that affected their region.

Time Period: Progressive Era, Early to Mid-20th Century
Topics: The lesson can be used in U.S. History units on the Progressive Era, the Great Depression, the New Deal, as well as in lessons on economics, politics, and sociology.

Imagine waking up in Hell one morning but going to sleep in Heaven at the end of the day.

First Lady Eleanor Roosevelt said that’s how an Arthurdale resident described going from a cramped, poverty-stricken mining town to the new experimental farming community. For that resident, Arthurdale, West Virginia, was Heaven. For Eleanor, it was a humanitarian project and experiment. For politicians and policy commentators, it was a flashpoint for the great debate over the role of government during an economic crisis.

Arthurdale was the first of one hundred homestead communities built from the ground-up by the federal government during the Great Depression. Due to Eleanor Roosevelt's lobbying and influence, this New Deal project provided spacious new homes with indoor plumbing, modern appliances, and furniture to a select, lucky few. Arthurdale children attended an experimental school and their parents worked cooperatively to support the town. The experiment Roosevelt championed faced many challenges, but Arthurdale remains.

In the decades before the Great Depression, Americans moved from agricultural areas to take jobs in mining and industry. The rise of industrialization led to more coal mining. When the Stock Market Crash of 1929 hit and the Great Depression caused the American economy to collapse, millions of people struggled to support their families. Industrial and mine workers especially suffered. They had already faced falling prices in the 1920s and competition for jobs in urban areas. On the eve of the Great Depression, in the late 1920s, coalminers in Scotts Run, West Virginia were already near revolt. Falling coal production left many of them without jobs, facing destitution, and the situation worsened. The Great Depression left them with little to no opportunities for work. In a depression, a decrease in American industry means a decrease in demand for coal to fuel it.

After Franklin Delano Roosevelt became president in 1933, he announced a "New Deal" for America. First Lady Eleanor Roosevelt toured the country extensively and gathered information used to formulate plans to combat the Great Depression. She conveyed her accounts of the conditions she witnessed and urged immediate action for relief. In his first one hundred days, FDR’s immediate concern was providing relief for struggling Americans.

Roosevelt followed Progressive ideologies that believed society’s various problems could be solved by providing good education, secure sources of food, a safe environment, and an efficient workplace. He increased federal government spending and created New Deal programs like the Civilian Conservation Corps and the Works Progress Administration, which used federal money to temporarily employ thousands of people through public works projects. Projects like the Subsistence Homesteads Division moved urban Americans out of cities and into rural areas where they could grow their own food.

After her husband's death in 1945, Eleanor Roosevelt was appointed as United States delegate to the United Nations, where she became an outspoken advocate for its Declaration of Human Rights. She campaigned for Democratic presidential candidates Adlai Stevenson and John F. Kennedy and continued her travels abroad. She visited many world leaders and entertained many at Val-Kill, her home in Hyde Park, New York. In her lifelong pursuit of humanitarian ideals, Eleanor Roosevelt would earn the title "First Lady of the World," a label bestowed on her by President Harry S. Truman.

The Living New Deal
The Department of Geography at the University of Berkley hosts and operates The Living New Deal, an online database of information about New Deal projects, programs, economy, and legacy. This clearing house offers visitors a vast wealth of information about New Deal projects, organizing them by state, artist, city, government agency, and more. The website also offers a large list of secondary resources for New Deal research, including books and films.

Library of Congress
Farm Security Administration photographers took hundreds of pictures of Scotts Run and Arthurdale (also listed under “Reedsville Project”), which are now available on the Library of Congress website.