Digging into the Colonial Past: Archeology and the 16th-Century Spanish Settlements at Charlesfort-Santa Elena 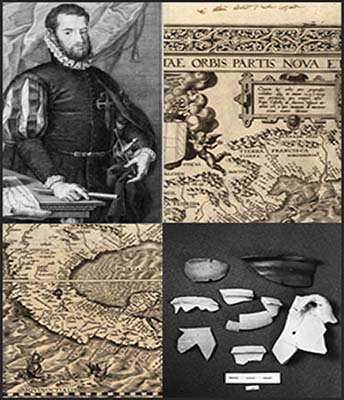 Discover the site of a 16th-century Spanish town that was founded before Roanoke, Jamestown, and Plymouth, and learn how archeology uncovered the story of Santa Elena.

1. To explain several reasons why the Spanish attempted to colonize eastern North America in the 16th century;
2. To construct a historical narrative and timeline of the settlement at Santa Elena using archeological information, maps, and artifacts;
3. To compare and contrast primary and secondary sources, and explain the value and limitations of each;
4. To analyze a collection of historical artifacts and describe how they contribute to our knowledge of the past.

Time Period: Mid- to late 16th century
Topics: This lesson plan can be used in units on pre-colonial history of the Americas or European exploration and conquest. The lesson could also be used to enhance the study of archeology and American Indians.

At the beginning of the 16th century, France and Spain engaged in a series of wars. The conflict between these two powerful kingdoms spread across the globe as the French and Spanish governments fought to increase their power, wealth, and prestige in Europe.

This competition transferred to "the new world" of the Western Hemisphere, as European nations became interested in the wealth available in areas like the Caribbean. During this time of conquest and competition, France attacked Spanish ships and posed a threat to Spanish interests in North America, creating an unstable environment.

Both France and Spain raced to settle and control the southern coast of North America. On a small island off the coast of present-day South Carolina lie the ruins of Charlesfort, the French outpost for a year, which later became Santa Elena, a Spanish colonial town from 1566 to 1587. The site has been abandoned now for more than 400 years.

For more than a century, historians and archeologists have worked to piece together the story of Santa Elena. Today, documents have been found that reveal the thoughts and motivations of Spanish colonists. Excavations uncovered artifacts and outlines of homes and fortifications. This valuable evidence lets us peek into the lives of the Spanish colonists and Spain's ambitions for North America in the 16th century.

While the textbook history of Europe's colonization of North America usually begins with Roanoke Island, Jamestown or Plymouth, it was in fact the Spanish who first arrived in North America. Spain began exploring the Americas in 1492 and landed in present-day Florida just decades after Columbus, claiming the entire continent for Spain. Colonization of the eastern seaboard began in the 1560s and the Spaniards competed with the French for control of the "new world."

La Florida, the land mass north of the Caribbean, continued to be a priority for the Spanish even as constant warfare between France and Spain existed throughout the sixteenth century. There were moments of peace, but they were usually short-lived. After 1560, the English also became a threat to the Spanish empire. They attacked Spanish ships and towns throughout the Caribbean and North America.

Spain wanted to protect the Straits of Florida because that strategic region had favorable currents and supported important shipping lanes, which imported and exported goods from the Spanish settlements in the Caribbean. However, hurricanes often destroyed Spanish ships and this brought the Spanish crown to consider settlements on the mainland to provide defense and assistance to shipwrecked sailors. In addition, the Spanish hoped to explore the land and find mineral wealth.

Parris Island Museum
The museum is dedicated to the United States Marine Corps history in the region, as well as general regional history including Spanish Santa Elena.

Florida Institute for Instructional Technology
The Florida Center for Instructional Technology (FCIT) works with educators to integrate technology into the classroom. FCIT is based at the College of Education at the University of South Florida. It provides online resources for students and teachers including the Jacques Le Moyne engravings he made while in modern-day Florida.

Library of Congress - 1492: An Ongoing Voyage
An online exhibit that focuses on Columbus’ 1492 expedition. The exhibit includes primary sources, artifacts, drawings and maps.

Smithsonian-Vikings: The North Atlantic Saga
From the National Museum of Natural History, this online exhibit commemorates the 1000th anniversary of the Viking landing in the Americas. The exhibit features documentation of the landing in addition to animations of ships, interviews with historians and the history of settlements from Scandinavia to Newfoundland.