New Philadelphia: A Multiracial Town on the Illinois Frontier 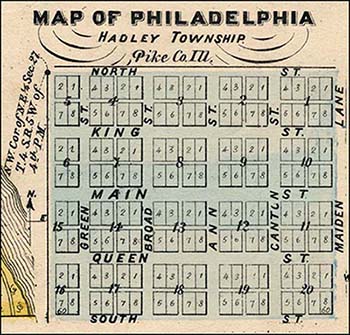 Who were the Americans that settled the United States' 19th century frontier?

The student will be able to
1. Explain how New Philadelphia developed and why it did not survive as a town
2. Describe the role of African Americans in securing their own freedom
3. Evaluate the effects of racism on New Philadelphia and other communities
4. Describe the ways in which archeology can help interpret the past
5. Identify and describe legal restrictions on African Americans in their own communities

Time Period: mid 19th century
Topics: This lesson can be used in American history courses in units on the Antebellum and Reconstruction periods or on westward expansion. It could also be used in units on African-American culture or historical archeology.

New Philadelphia looked like a typical west-central Illinois pioneer town to travelers cresting the hill overlooking the place in the mid-1800s. Imagine villagers filling baskets with a bounty of apples, corn, and wheat, while chickens clucked and pigs rooted in nearby pens. Picture farmers hitching mules and oxen to carts filled with vegetables, fruit, and grain to sell at markets. Listen for loud clanging from the blacksmith's shop as hammers shaped hot metal into shoes for mules and horses. As in other frontier towns, smoke from cooking fires swirled from the dwellings that dotted small plots of land.

But New Philadelphia was not a typical pioneer town. It was the first town platted and registered by an African American before the American Civil War. A formerly enslaved man called "Free Frank" McWorter founded New Philadelphia in 1836 as a money-making venture to buy his family out of slavery. Census records and other historical documents tell us that New Philadelphia was a place where black and white villagers lived side by side, but we know that the town's dead lie buried in cemeteries separated by color.

By 1885, many villagers had moved away in search of jobs and better economic opportunities. Plows buried any material remains left behind, and grazing livestock and crops covered most of the site. By the 1940s, nothing of the town remained above ground. However, the town's descendants and neighboring communities did not forget New Philadelphia. Descendants continued to live in the area until the 1950s. Grace Matteson wrote "Free Frank" McWorter and the "Ghost Town" of New Philadelphia, Pike County, Illinois. Later, Lorraine Burdick remembered the town in New Philadelphia: Where I Lived. McWorter family descendants were members of the Negro History Movement led by Carter G. Woodson, and through their activities the story of Free Frank was kept alive. Helen McWorter Simpson, great granddaughter of Free Frank McWorter, wrote Makers of History. Juliet E. K. Walker memorialized her great great grandfather in Free Frank: A Black Pioneer on the Antebellum Frontier. Archeologists and historians pieced together historic documents, recollections of the town's descendants, and artifacts to tell the story of New Philadelphia and the lifeways of its diverse townsfolk.

Setting the Stage
Seventeenth-century European explorers and settlers required a force of laborers to tame and cultivate what they called the New World. Indentured servants provided some of the necessary workers, but by the mid-17th century, a slave trade set up in Africa was forcibly bringing men, women, and children to clear land, plant, tend, and harvest crops, and build towns. By the late 18th century, many people thought that the practice of slavery was incompatible with the ideals of equality and freedom on which the newly formed United States of America was based. By the time the United States Congress established the Territory of Illinois in1809, slavery was a contentious issue nationwide. Attempts to expand slavery clashed with a growing conviction that the practice should be abolished, eventually dividing the nation and erupting into the Civil War.

At first, threats to settlers from Native Americans living in the region and dependence on goods shipped from distant markets limited the growth of the Illinois Territory. That territory originally included today's states of Illinois, Wisconsin, northern Minnesota, and the western portion of Michigan's Upper Peninsula. Many early residents moved into this area from southern states. To promote settlement of the Illinois Territory, the United States government set aside 3.5 million acres of land between the lower Illinois and Mississippi rivers called Military Tract Land in 1817. The land was parceled into 160 acre tracts and awarded to veterans for their military service; private citizens also purchased affordably priced parcels of Military Tract Land.

Illinois joined the United States in 1818 as a free state that prohibited slavery. Slavery was permitted in Missouri and Kentucky, across the rivers on the new state's southern and western borders. Exceptions to the ban on slavery in Illinois were made, however, in some instances. These included the enslaved labor force used to extract salt from saltwater springs in the southern Illinois American Bottoms region and those enslaved individuals owned by French citizens before the state was created.

Settlements on the new frontier flourished after the last American Indian tribes in the region were removed to reservations in 1832. Canal and river transportation also created new markets and economic opportunities in the region. In 1819, alarmed by competition for resources from the influx of free African Americans, Illinois became one of many states to enact stringent Black Codes that controlled and restricted virtually every aspect of African American life. Such was the state of affairs in Illinois when a former slave named Free Frank founded the town of New Philadelphia in 1836

By studying New Philadelphia: A Multiracial Town on the Illinois Frontier, students will learn about Free Frank McWorter and how archeology can help tell the story of the interracial town he founded in the years before the Civil War. Those interested in leaning more will find a number of useful sites on the Internet.

Historical Landscapes of New Philadelphia
This website, part of the African-American Archaeology, History and Cultures project at the University of Illinois, Urbana-Champaign, contains information on the history of New Philadelphia, maps and surveys, ownership over time, archeology projects and reports, census data, tax records, newspaper archives, and the National Register of Historic Places nomination form, among other things.

Time Team America's "New Philadelphia" at PBS.org
The Time Team America TV show about North American archeology aired an episode about New Philadelphia. Free video clips from the episode can be found at PBS.org. They feature the work of archeologists, including student archeologists, at the historic site, the lives of the people who lived there, and the site's significance as a National Historic Landmark.