The Spanish Treasure Fleets of 1715 and 1733: Disasters Strike at Sea 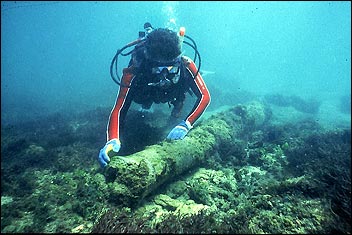 Grade Level:
Middle School: Sixth Grade through Eighth Grade
Subject:
Literacy and Language Arts,Social Studies
Lesson Duration:
90 Minutes
Common Core Standards:
6-8.RH.2, 6-8.RH.3, 6-8.RH.4, 6-8.RH.5, 6-8.RH.6, 6-8.RH.7, 6-8.RH.8, 6-8.RH.9, 6-8.RH.10, 9-10.RH.1, 9-10.RH.2, 9-10.RH.3, 9-10.RH.4, 9-10.RH.5, 9-10.RH.6, 9-10.RH.7, 9-10.RH.8, 9-10.RH.9, 9-10.RH.10
Additional Standards:
US History Era 1 Standard 1B:  The student understands changes in Western European societies in the age of exploration.
Curriculum Standards for Social Studies from the National Council for the Social Studies
Thinking Skills:
Remembering: Recalling or recognizing information ideas, and principles. Understanding: Understand the main idea of material heard, viewed, or read. Interpret or summarize the ideas in own words. Applying: Apply an abstract idea in a concrete situation to solve a problem or relate it to a prior experience. Analyzing: Break down a concept or idea into parts and show the relationships among the parts. Creating: Bring together parts (elements, compounds) of knowledge to form a whole and build relationships for NEW situations. Evaluating: Make informed judgements about the value of ideas or materials. Use standards and criteria to support opinions and views.

How did weather effect the Spanish-American colonial system in the 1700s?

1. To explain how Spain created an empire from trade routes to the Americas;
2. To describe the convoy system Spain used to collect treasure and native products from the Americas over three centuries;
3. To describe the wrecks of the 1715 and 1733 treasure fleets and consider how these disasters impacted Spain;
4. To discuss the importance of protecting resources such as the Urca de Lima and San Pedro sites;
5. To compare the preservation of local historic sites to that of underwater resources.

Time Period: Mid 16th century to early 18th century
Topics: This lesson could be used in American history, social studies, and geography courses in units on Spanish colonization of the Americas, transatlantic trade and commerce in the colonial period, or maritime history.

The sun disappeared and the wind increased in velocity coming from the east and east northeast. The seas became very giant in size, the wind continued blowing us toward shore, pushing us into shallow water. It soon happened that we were unable to use any sail at all…and we were at the mercy of the wind and water, always driven closer to shore. Having then lost all of our masts, all of the ships were wrecked on the shore, and with the exception of mine, broke to pieces.
-Miguel de Lima, owner of the Urca de Lima.

This violent storm off the coast of Florida in July 1715 ravaged 11 Spanish ships as they attempted to return to Spain. From the mid 16th to the mid 18th century, heavily-armed fleets such as this plied the waters between Spain and the Americas transporting massive amounts of New World treasure. Through this treasure fleet system, Spain created a mighty New World empire and became the most powerful nation in Europe. The fleets' return voyage—when the ships were laden with silver, gold, gemstones, tobacco, exotic spices, and indigo—was the most dangerous. Pirates and privateers from rival European countries threatened to seize the precious cargoes and jeopardize Spain's dominance of the Americas. The greatest danger, however, came not from enemy countries, but from unexpected and deadly hurricanes.

In 1715 and again in 1733, Spain's treasure fleets were devastated by hurricanes off the coast of Florida. Although the Spanish managed to recover some treasure, much more remained on the ocean floor. The sunken ships lay forgotten for more than 200 years until modern treasure hunters discovered several of them. Today, the remains of two of the ships—the Urca de Lima from the 1715 fleet and the San Pedro from the 1733 fleet—are protected as Florida Underwater Archaeological Preserves. These ships are time capsules from a bygone era and can reveal much about the history of the mighty maritime system that helped shape the Americas.

Spanish conquest and colonization of the Americas began with the arrival of Christopher Columbus in 1492. In the process of searching for a new route to the Indies (South and Southeast Asia), Columbus discovered a region of the world Europeans did not know existed. This region, including the Caribbean and North and South America, came to be referred to by Europeans as the New World, the West Indies, or the Americas. Although new to Europeans, these lands were home to millions of indigenous peoples including the Arawak, Aztec, Maya, and Inca civilizations and hundreds of Native American tribes. From early on, much of the New World's value was based on its potential to provide wealth in the form of the precious metals gold and silver. As a result of the European quest for land and riches, the native populations endured violent attacks, forced labor, and the spread of European diseases.

As Spanish explorations continued in the 16th century, Spain's New World empire expanded. In 1521, Spanish conquistador (conqueror) Hernan Cortes conquered the Aztecs (who occupied present day Mexico) and renamed their lands "New Spain." Word spread as Cortes began sending to Spain amazing gold and silver objects belonging to the native population. The Spanish soon discovered gold and silver mines in both New Spain and South America. They mined the precious metals and brought them to Spain aboard merchant ships. The wealth generated by these precious metals allowed Spain to become the most powerful nation in Europe.

Ships from rival countries such as England, France, and the Netherlands began trying to seize these Spanish ships as they made their way towards Spanish ports filled with treasure. Spain responded by requiring the merchant ships to sail in fleets or convoys escorted by armed warships for protection. This fleet system began in the 1530s and was in use for more than 200 years. Although traveling in armed convoys provided some protection from enemy ships, this system could not save convoys from unpredictable storms or dangerous shoals and reefs. As a result, some ships and their cargoes inevitably were lost. Two of the worst disasters in the history of the treasure fleet system occurred in 1715 and 1733 when violent hurricanes off the coast of Florida decimated the treasure-laden fleets as they struggled to return to Spain.

Exploring Florida: Social Studies Resources for Students and Teachers
This website contains thousands of educational resources for use in the classroom including maps, historic photographs, and readings. The Florida Then & Now section features reproducible readings, questions, and activity sheets for an upper elementary study of Florida History.