The Penniman House: A Whaling Story 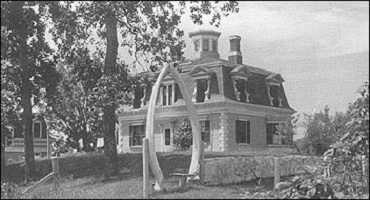 Meet Captain Edward Penniman, and learn about 19th-century whaling in southeastern Massachusetts and how the whaling industry impacted Penniman's family and life.

1. To chart places associated with the whaling industry;
2. To describe the impact of the whaling industry on a captain and the captain’s family;
3. To identify the global, cultural, and economic connections made by the whaling industry in the middle through late 1800s;
4. To explore the concept of "sky glow" and list ways to protect the night sky;
5. To research historic homes in their community that are historically significant because of their association with a particular industry.

Time Period: 1850-1874
Topics: This lesson could be used in US history, social studies, and geography in units on maritime history and the whaling industry.

Captain Edward Penniman steps outside his house on Fort Hill in Eastham, Massachusetts in the late summer of 1881. He can feel the chill of the winds blowing off the Atlantic Ocean. He can smell and taste the salt air. By habit, he scans the white-capped horizon in search of a whale's spout. Soon he would leave on his fifth voyage across the world's oceans, to hunt these "leviathans of the deep." The voyage could last for four years. Would his wife Gustie come along this time? Would any of their children accompany them? Where would he find his crew? Would this whaling voyage be successful? It was the whaling industry, or "whale fishery," as it was known then, that satisfied Captain Penniman's adventurous spirit and offered him an opportunity to earn enough money to support a family and to construct an impressive home in Eastham.

Captain Penniman built his French Second Empire style house on Cape Cod in 1868. Today, over 100 years later, the Penniman House is a National Historic Site owned and interpreted by the National Park Service as part of Cape Cod National Seashore. The house holds the Penniman family's written records and artifact collections, which provide glimpses of the places and people that the family visited on their whaling voyages. Theirs is a true life whaling story representative of hundreds of other whaling captains and their families that traveled the globe to pursue whale fishery.

Edward Penniman was one of the most successful whaling captains in New England. However, his letters indicate that he did not like life at sea. Captain Penniman whaled in order to make a living. Whales were considered a natural resource even centuries before Captain Penniman set out on his voyages. The lives of many people, in addition to the captain and crew, depended on a successful whaling trip. From a single whale could be harvested several tons of oil and whalebone.

With the money earned from whaling, Captain Penniman was able to afford a large ornate house in the latest style for his family. The Penniman House, built in 1868, was considered by many at the time to be "pretentious and unconventional," but Captain Penniman was proud to say "I have sailed the seven seas and have never seen anything more beautiful than Fort Hill."

Many times Captain Penniman was accompanied by his wife Augusta and one or more of their three children on the long whaling voyages. Items found in their Eastham house reflect the diverse nature of the lands that Captain Penniman and his family explored and the people they met in their travels. Yankee whalers were often the first Americans to explore the Pacific Islands, Asia, and the Arctic realm. In order to navigate these distant and at times strange waters, ship captains like Penniman relied on specialized instruments, charts, and even the stars in the sky.

The crewmen exchanged material goods such as tools, food, souvenirs as well as ideas and experiences with indigenous peoples. In many instances, men from these far away lands joined as crewmembers on the Yankee whaling ships. At the end of the voyages, they would often settle in the United States. Eventually, their family members immigrated to join them or they married into local families thus creating a diverse cultural heritage in coastal port towns.

Today, the life and experiences of the Pennimans give us a glimpse into the lives of whaling captains and their families of more than a century ago.

New Bedford Whaling National Historical Park
New Bedford Whaling National Historical Park is a unit of the National Park System. Visit the park's web pages for more information on the heritage of the world's preeminent whaling port during the 19th century. A variety of cultural landscapes, historic buildings, museum collections, and archives preserve this history and collectively recount the stories of a remarkable era.

International Whaling Commission
The International Whaling Commission (IWC) was set up under the International Convention for the Regulation of Whaling which was signed in Washington DC on 2 December 1946. The purpose of the Convention is to provide for the proper conservation of whale stocks and thus make possible the orderly development of the whaling industry. Visit the IWC website for more information about the history and purpose of this organization and how they are relevant today.