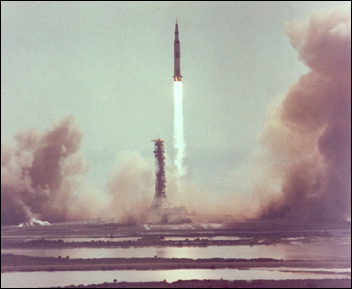 1. To identify the events that led to the US decision to send a man to the Moon;
2. To examine some of the work necessary to make the Apollo project possible;
3. To describe how widely separated space centers cooperated on the Apollo project;
4. To evaluate arguments for preserving historic sites relating to the space program;
5. To discuss comparable debates about preserving places in their own communities that are associated with recent history.

Time Period: 1960s
Topics: The lesson can be used in American history, social studies, and geography courses in units on the space program, the Cold War and its effects on American society, or interdisciplinary units on science and technology.

They came by plane, boat, bus, and auto to Florida's Kennedy Space Center. Generals, members of Congress, governors, mayors, ambassadors, and celebrities filled the VIP grandstand. Journalists from 54 countries waited to send out the news. Several hundred thousand people had converged on the Kennedy Space Center on July 16, 1969, to view the launch of the Saturn V rocket that would propel Apollo 11 to the Moon.

Millions of people all over the world kept their eyes on their television sets waiting for the countdown to begin. The engineers and technicians at the Marshall Space Flight Center in Alabama trusted the Saturn rocket they had developed and tested, but may secretly have kept their fingers crossed. The men watching their computer screens at the Mission Control Center at the Manned Spacecraft Center (now the Johnson Space Center) in Texas seemed calm, but their hearts must have been beating a bit faster than normal.

At two minutes before the launch, a reporter recorded that "idle conversation halted. Tedium evaporated. 'We have liftoff,' said Mission Control. People shouted 'Go! Go! Go!,' and whispered 'God bless you.' In another two minutes, there was nothing to see but the blue sky."

"If we are to win the battle that is going on around the world between freedom and tyranny, if we are to win the battle for men's minds, the [Soviet Union's] dramatic achievements in space which occurred in recent weeks should have made clear to us all…the impact of this adventure on the minds of men everywhere who are attempting to make a determination of which road they should take.... We go into space because whatever mankind must undertake, free men must fully share.... I believe this nation should commit itself to achieving the goal, before this decade is out, of landing a man on the Moon and returning him safely to earth."
- President John F. Kennedy, May 25, 1961

Evidence of man's insatiable curiosity about space can be found throughout human history--in the Greek myth of Icarus trying to fly to the sun, in Galileo's observations of the solar system, and in the first flight of the Wright brothers. The Apollo project to put a man on the Moon was also a product of the 1960s, a period of heightened Cold War tensions. Allegations of a dangerous "missile gap" between the Soviet Union and the United States had been an important element in John F. Kennedy's successful presidential campaign in 1960. In April 1961, Yuri Gagarin, a Soviet cosmonaut, became the first human to fly in space, and the abortive Bay of Pigs invasion, intended to lead to the overthrow of Fidel Castro in Cuba, turned into an embarrassing failure. For the Kennedy administration, the project to put a man on the Moon was a way to recapture the prestige that the nation seemed to have lost.

Closely following the United States' first manned space flight by astronaut Alan Shepard, Kennedy's commitment immediately captured the imagination of the American people. Shepard's short suborbital flight had been part of Project Mercury, underway since 1958 to develop the basic technology and hardware for manned space flight and to investigate man's ability to survive and perform in space. Project Gemini, begun in 1964, formed the link between the Mercury program's short flights and the Apollo program. The Gemini program provided astronauts with experience in returning to the earth from space, in linking between space vehicles, and in "walking" in space without the protection of a spacecraft. A series of unmanned satellites yielded information about the Moon and its surface that was critical to ensuring that the astronauts could survive there. The Apollo project built on the work of its predecessors to carry out President Kennedy's 1961 commitment. Between July 16 and July 24, 1969, as the whole world watched, Apollo 11 carried three US astronauts to the Moon and returned them safely to earth.

NASA
The NASA website contains a wealth of information on the history of the space program and on current projects. It also includes a variety of photographs and educational materials relating to the Apollo mission.

NASA Modern Figures Toolkit
The NASA website provides an education toolkit for grades K-12 containing historical and STEM materials about the types of work people do at NASA. Sections on Katherine Johnson, a mathematician and African American woman who worked on space travel in the 1960s, gives students a chance to discuss inclusion in careers.

National Park Service--Man in Space: Study of Alternatives
This planning study explores 26 significant sites associated with Man in Space. These sites include wind tunnels, rocket engine and development test facilities, launch complexes, training facilities, spacecraft and hardware test facilities, mission control and tracking centers, and other support facilities throughout the United States. The study also discusses the 18 installations that played an important role in the early American space program and/or have value for interpreting the history of the program to the public. Other space museums and facilities that provide interpretive and educational opportunities related to the exploration of space are also briefly described.

Aviation: From Sand Dunes to Sonic Booms
This National Register of Historic Places' online travel itinerary provides information on more than 100 historic places listed in the National Register associated with history of aviation. Numerous sites featured on the itinerary are associated with America's Space Program. Also included are essays on the Idea of Flight, the Wright Brothers, Aviation Pioneers, Modern Aviation, Air Power, and Space.

Space Movie Cinema
Made available by the NASA Johnson Space Center, Space Movie Cinema allows viewing of a number of short movies on space exploration on personal computers that have the necessary viewing capability.

To the Moon
To the Moon is a companion web site to the NOVA special that was shown on the Public Broadcasting System in 1999. It includes a panoramic view of the landscape of the Moon, science puzzles, and interviews with astronauts.