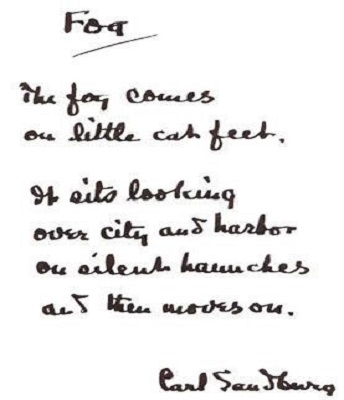 Grade Level:
Upper Elementary: Third Grade through Fifth Grade
Subject:
Literacy and Language Arts
Lesson Duration:
60 Minutes
Thinking Skills:
Remembering: Recalling or recognizing information ideas, and principles. Understanding: Understand the main idea of material heard, viewed, or read. Interpret or summarize the ideas in own words. Applying: Apply an abstract idea in a concrete situation to solve a problem or relate it to a prior experience. Creating: Bring together parts (elements, compounds) of knowledge to form a whole and build relationships for NEW situations.

How can I write a poem using figurative language?

Carl Sandburg was known as the Poet of the People. He loved writing so much that he wrote poetry, children's stories, news articles, and a biography about Abraham Lincoln, as well as an autobiography about himself.

Upload "Fog" by Carl Sandburg to Google Slides to push out to students virtually or use in the classroom.

Procedure (Remote Learning)
Share the “Fog” PowerPoint with students. They will listen to Carl Sandburg read his poem and answer questions about his poem. Then students will write their own poem comparing snow to a snowy owl.


Teaching Strategy
Summarizing Strategy
Have the students work in small groups or individually to write a poem using figurative language to compare another type of weather and animal. Share poems with the class.