Temperatures in the far north are warming faster than anywhere else on the planet. This trend is having a profound effect in the frozen waters off the coast of Alaska. These days, sea ice forms later in the season and melts earlier. Recent measurements, in fact, indicate that ice coverage in the Arctic is at the lowest levels ever recorded.

So, why does this matter? Consider sea ice as a vibrant floating community, sustaining millions of organisms – from microscopic to massive. Phytoplankton, walruses, humans, and a host of other living and nonliving factors are intricately bound to this community. Thus, what happens to the ice has a domino effect on everything around it. Decreased ice coverage, for example, allows more sunlight to reach the ocean, warming it still further. Gaps between icebergs grow ever larger. Marine mammals, like seals and walruses, must then travel farther to find a place to rest, escape predators, and mate. The extra effort they expend drains already scant energy reserves; so fewer survive the winter. Hunting becomes more difficult and dangerous for humans, including indigenous Alaskans whose own survival has depended on a healthy ocean for thousands of years. With the rate of melting ice expected to escalate, the very existence of this ancient and vital ecosystem is under threat. Check out this data animation that shows how sea ice has changed since 1980.

Sea ice doesn't just impact the Arctic, it has global climate impacts. For example, warmer Arctic air changes global circulation patterns. The strength of the jet stream is dependent upon the stable, cold Arctic air, but when the Arctic warms, it weakens the jet stream, which moves cold air (polar vortex) down to lower latitudes. The warming and lack of sea ice in the Arctic has even been linked to heat waves in the southern Plains and southeastern U.S.

After the Ice is a new mini-documentary series sharing stories of Indigenous communities challenged by sea ice loss in Alaska’s Bering Sea. It is a three-part series created through a partnership between the Bering Sea Elders Group and the Study of Environmental Arctic Change.

Ice Edge - The Ikaaġvik Sikukun Story
Ice Edge is a film about a project that combines Indigenous and western ways of knowing to reveal Arctic change. Five years ago, facing momentous changes in coastal sea ice, Iñupiaq residents of the Native Village of Kotzebue along northwest Alaska and researchers from Columbia University and the University of Alaska Fairbanks began a collaborative research project to understand the changes in sea ice cover and implications for the Indigenous way of life.

The project, called Ice Bridges, or Ikaaġvik Sikukun in the Iñupiaq language, melded Indigenous knowledge, aerial monitoring, climate simulations, and ocean and marine mammal science to address questions forged from the beginning through dialogue. The first peer-reviewed studies are emerging, along with a film chronicling the years-long study and the relationships it forged. 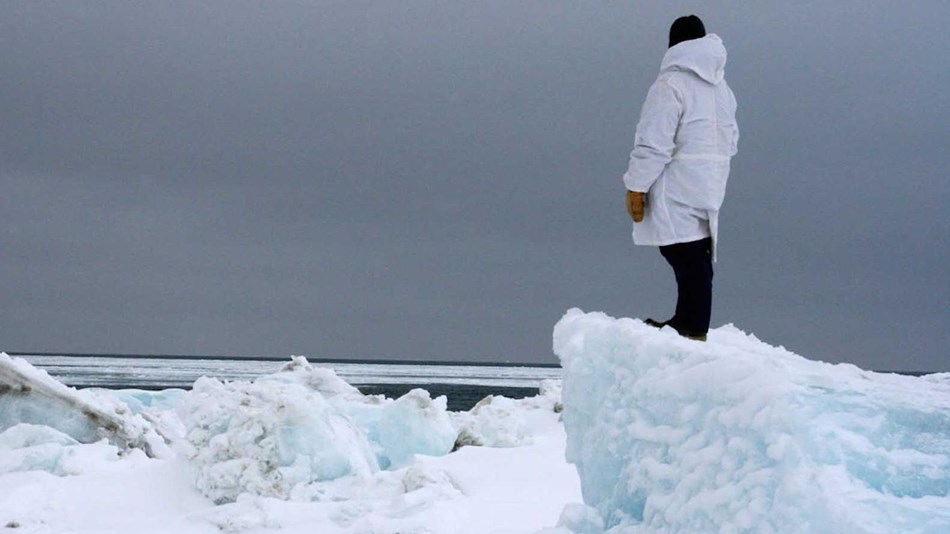 Decreasing sea ice poses significant challenges to both wildlife and people of the Arctic.