Approximately one quarter (4.6 million acres) of Alaska's glaciers exist within national parks. Glaciers require three conditions to form: abundant snowfall, cool summers, and the gravitational flow of ice. Glaciers form in land areas where annual snowfall is greater than annual snowmelt. Some areas in Alaska, such as the Harding Icefield in Kenai Fjords National Park, receives an average of 60 feet of snow each year. Large amounts of snowfall, combined with cool summers and gravity, form multiple, connected glaciers over time, known as an icefield.

Glaciers tell stories of the Earth's history; they shape the Earth's surface as they move and form valleys and mountains. Glacial ice documents weather and life from many years past. Tidewater glaciers are those that terminate in the sea. The ice that calves off these glaciers provide important habitat to ice-dependent species, such as seals.

What was the glacial extent in Alaska during the Pleistocene? Check out the Alaska PaleoGlacier Atlas.

Learn more about how we understand glacier melt

Glacier monitoring and melt modeling on debris-covered Kennicott Glacier, presented at the 2021 meeting of the American Geophysical Union 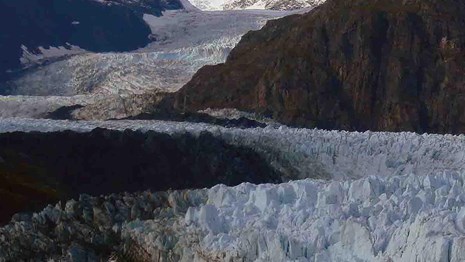 Sensitive to seasonal variation in temperature and precipitation, glaciers are excellent indicators of regional and global climate. 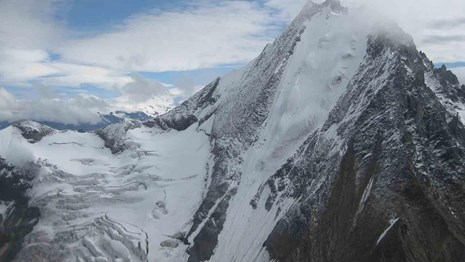 Glaciers are inextricably tied to climate and the hydrological cycle, providing base flow to major rivers in Central Alaska.

Glaciers are a magnificent part of the landscape of Kenai Fjords National Park. They are responsible for carving the park's fjords, they nourish downstream ecosystems, and they provide recreational opportunities for visitors to the park. Although glaciers may appear to be permanent, unchanging features—things that change very slowly are often said to move at "a glacial pace"—glaciers are actually quite dynamic, changing in size in response to changes in their environment. How do we know that glaciers are changing in size? One method is to use photographs, taken by people on the ground or from satellites in space. By comparing photographs of the same location from different dates (repeat photography), we can monitor how glaciers change over time. Explore the new story map below to learn more.
View full screen >

the retreat and degradation of glaciers

process of ice breaking off at a glacier's terminus

a deposit of rock debris shaped by glacial flow and erosion

the lower end, or snout, of a glacier