Reptiles and amphibians (herps) represent an important part of aquatic and terrestrial ecosystems. Amphibians in particular are good indicators of environmental change due to their sensitivity to a variety of factors such as pollution, introduced species, drought, habitat destruction, and disease. Herp populations may be affected by these factors and exhibit measurable changes in site occupancy, distribution, abundance, and species richness.

These amphibious creatures are probably some of the least seen yet most heard animals in San Francisco Bay Area National Parks. Sodden areas near creeks and marshes are the best place to find most frog species. Unfortunately, similar habitats outside of parks and other protected areas are rapidly giving way to a variety of introduced changes.

Six species of frogs and toads currently call the parks home, including the non-native American bullfrog (Rana catesbeiana). The region’s most common frog is the Sierran tree frog (Pseudacris sierra), a species that calls in large, loud choruses in the late winter and spring. Foothill yellow-legged frogs (Rana boylii) were historically abundant in Pinnacles streams, but have not been seen in several decades. A re-establishment plan for this species is currently under consideration.

One of the best-studied frogs in the parks is the federally threatened California red-legged frog (Rana draytonii). 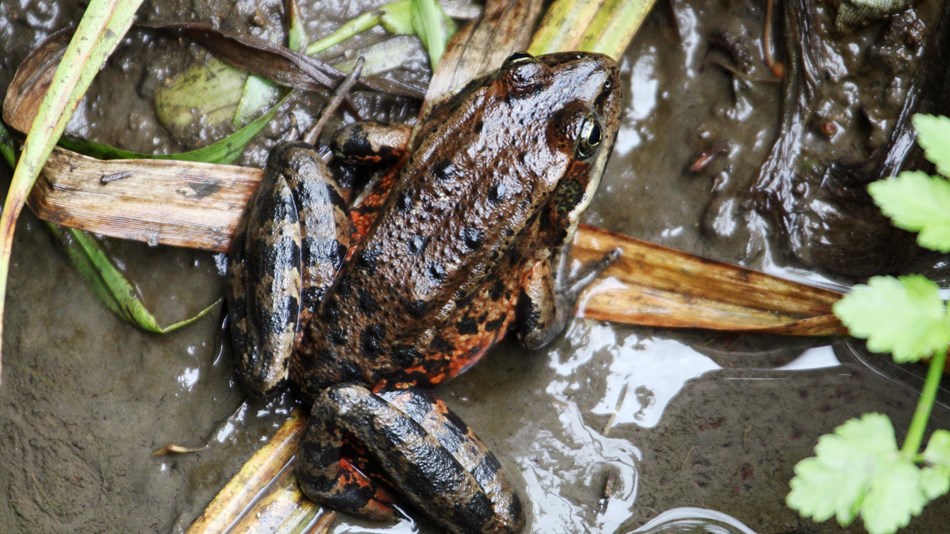 This frog has been eliminated from 70 percent of its former range, and is federally listed as a threatened species.

Salamanders are amphibians that differ from frogs and toads in that they have a long tail and four roughly equal-sized legs. A total of eight salamander species call the San Francisco Bay Area parks home, with the highest diversity in the coastal parks. Aquatic species near the coast are the Rough-skinned newt (Taricha granulosa), California newt (Taricha torosa), and California giant salamander (Dicamptodon ensatus). The East Bay parks share three terrestrial species with the coastal parks: Ensatina (Ensatina eschscholtzii), arboreal salamander (Aneides lugubris), and California slender salamander (Batrachoseps pacificus). Pinnacles National Park also shares these species, except that the last is replaced by the locally endemic Gabilan slender salamander (Batrachoseps gavilanensis). Also at Pinnacles is the federally threatened California tiger salamander (Ambystoma californiense) which breeds in seasonal ponds in grasslands.

Unlike most amphibians, several of our salamander species lay their eggs in moist places on land, rather than in water. These terrestrial species are excellent indicators of biodiversity and terrestrial habitat integrity, and the aquatic breeders can alert park managers to potential contaminants in wetland habitats. Look for salamaders in these wet habitats, and also watch for them on the road on rainy nights!

Snakes comprise an important part of ecosystems throughout the San Francisco Bay Area. The park network contains an extensive array of habitats that support a diverse range of serpent species. Although many species have maintained stable populations, most still face pressures of human development and habitat encroachment. Several species of snakes are commonly found stretched out on the surface of roadways to absorb the heat of the asphalt, and this habit makes them particularly vulnerable to being killed by cars.

The strikingly colorful San Francisco garter snake (Thamnophis sirtalis tetrataenia) is threatened by habitat loss as well as collection by reptile fanciers and breeders. It is the most jeopardized of the area’s species, having been listed as federally endangered since 1967. The federally threatened Alameda whipsnake (Masticophis lateralis euryxanthus) can be found in the East Bay parks. Although snakes are often feared and reviled by many people, the Western rattlesnake (Crotalus viridis) is the only species in the park network that poses a potential threat to humans. If you are lucky enough to encounter a snake, give it space and take a moment to watch it undisturbed.

Browse articles and information summaries about reptiles and amphibians in the San Francisco Bay Area.

See below for the latest on reptiles and amphibians from the Bay Area Nature & Science Blog.